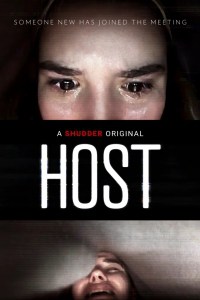 BASICALLY…: A group of friends chatting online get more than they bargained for when they accidentally summon a spirit during a séance…

It’s the Little Film That Could© of 2020, and so far one of the only good things to result from the COVID-19 pandemic.

Host, the feature debut of Rob Savage, was conceived, shot, edited, and then released on horror streaming service Shudder within twelve weeks, all during the COVID-19 pandemic and subsequent lockdown earlier this year. That’s pretty impressive for a film on any scale to have such a quick production process, but what’s perhaps even more impressive is how quickly the word seemed to spread upon its online release; to date, it retains a strong 100% rating on Rotten Tomatoes, and audiences have been just as quick as critics to applaud its genuine scares, with many people already calling one of the scariest movies in a year that has seen nothing but endless real-life horrors. The film was even recently picked up by UK distributor Vertigo Releasing for a theatrical release this coming December, further cementing its incredible journey from a mere concept in Savage’s mind to screens across the country and indeed the world.

It’s all pretty amazing, but none of it matters if the film itself is worthy of the hype surrounding it; any film, especially a horror, can receive boatloads of attention and still turn out to be underwhelming (just look at The Devil Inside, which had a pretty solid marketing campaign only to turn out to be, well, The Devil Inside). Host, though, is very much worthy of its significant buzz; it’s a very suspenseful and highly entertaining viewing experience, with a fresh approach to some old scares that Savage and his formidable cast of actors – more on them in a bit – are more than willing to execute with love and appreciation for the genre, while unashamedly doing their own thing with it.

The film – very much like the Unfriended movies – is set entirely from the point of view of a computer screen, particularly on a Zoom video call where friends Haley (Haley Bishop), Jemma (Jemma Moore), Emma (Emma Louise Webb), Radina (Radina Drandova), Caroline (Caroline Ward) and Teddy (Edward Linard) are chatting online during the lockdown. For a bit of fun, Haley has arranged for a medium (Seylan Baxter) to lead them all in a séance to supposedly communicate with supernatural spirits, but things go south very quickly when they end up summoning a demonic presence which, naturally, starts terrorising them all in their respective locations.

Conceptually, the film certainly finds itself in familiar horror movie territory – evil spirits, candle-lit séances, rather gruesome death scenes, and all the other usual suspects – but as always, it’s down to the execution, and Savage very cleverly finds numerous ways to take as much advantage of the isolated locations and use of webcam technology to deliver some truly nerve-wracking scares. Several features of the Zoom app play neatly into some of the creepier moments of the film, from face filters to customised video backgrounds, while the use of lighting in the numerous locations – all filmed in the actors’ own homes – establish a sinister mood that always lingers even in scenes where it seems everything is perfectly fine. The frequent to-and-fro cutting from one person’s camera to another, similar to how it does so on an actual Zoom call, creates a convincing illusion that every single person you see is somehow in perfect sync with each other, despite almost none of them being anywhere near each other during filming; it is seamless editing, stitched together tight enough to resemble a real-time flow from beginning to end (even if there are some questionable jumps from daylight to night-time within minutes).

Even though Savage is the credited director, Host is very much a collaborative effort with the actors who, using whatever resources they had at their disposal in their own homes, actually crafted their own horror effects to go along with the spooky goings-on that we see on-camera. A lot of respect needs to be paid to each and every one of these actors who have gone above and beyond to fill in where a production team on any normal set would have done the job for them; one has their chair suddenly jolted backwards, another gets their face completely bloodied up, and even one of them – who is, for the record, a professional stunt performer – gets set ablaze all over their body. It’d be easy for anyone who’s literally phoning in their performance to just sit there and not give a damn on their way to an easy paycheque, but all of these actors are incredibly dedicated to their craft and it shows here on many levels, not just in their scared-shitless individual turns but also their practicalities they have all contributed towards giving the film a healthy amount of impressive set-pieces that any other horror on a far larger budget (and tons more locations) might struggle to make truly effective.

Most of all, though, it is indeed pretty terrifying. There are very few cheap jump-scares (barring a couple nearer the end), and a lot of shots that rely on the dark atmosphere of an attic, a hallway, or the reasonably lit bedrooms where most of the characters are communicating from, to get a legitimate fright out of the audience. It contains a good amount of scares, with characters who you actually like, and uses the Zoom video call setting to its full advantage – all in just barely under an hour; seriously, this film is 57 minutes long, or about two-thirds of a standard 90-minute flick, and it moves along at a very steady pace that it seriously does not feel that short, or too long either.

It is very much a modern-day Blair Witch Project, which revels in its tiny budget and delivers fresh, genuine scares you’d be hard-pressed to find in horrors that cost millions more to make. Time will tell if Host does indeed reach similar commercial heights as that 1998 breakout hit, but the fact that it’s already gained a healthy word-of-mouth on the internet – and for good reason – is a sign that it’ll definitely have legs once it properly debuts in the cinema.

Host is an effective and legitimately terrifying horror that takes full advantage of both its Zoom video call settings and its limited COVID-19 inspired locations to deliver some truly chilling scenes, which director Rob Savage and his savvy team of actors work hard to convey through cleverly-done DIY practical effects and a genuinely spooky atmosphere.