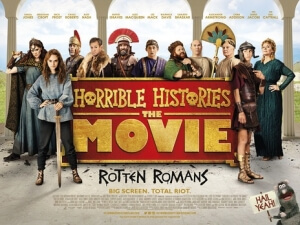 BASICALLY…: In the time of Romans, young Atti (Croft) is sent to a Britain under Roman rule, where he must pick a side in the upcoming fight for supremacy…

For over 25 years, children’s author Terry Deary has written hundreds of books for his popular Horrible Histories series, designed to inform kids about certain periods in history with an acute sense of humour. It has also inspired a number of television series based on the books (which featured titles such as Vile Victorians, Terrible Tudors and Gorgeous Georgians), the most beloved being the one which began airing in 2009 and became such a huge hit with critics and audiences that it continued to air continuously on CBBC even after its original run ended, before the series was revived in 2015.

The creative team behind that particular series has since branched off, with some of the original players – among them Mathew Baynton, Simon Farnaby and Martha Howe-Douglas – reuniting a few years ago to make their own comedic historical family outing, the Shakespeare faux-biopic Bill. That film was a true delight; it was hilarious, had memorable characters, and it took full advantage of its time period to deliver some rather inspired family-friendly jokes.

On the complete flipside, Horrible Histories: The Movie – Rotten Romans (the first official film spin-off of the franchise, with series developers Dominic Brigstocke and Caroline Norris serving as director and writer respectively) lacks heart, humour and sophistication, proving that what might work in a shorter TV format doesn’t necessarily translate well into a more theatrical setting.

Taking its title from the fourth chronologically-released book in Deary’s book series, Rotten Romans begins in Ancient Rome where Emperor Nero (Craig Roberts) is in charge and in constant battle against his power-hungry mother Agrippina (Kim Cattrall, whose accent constantly slips from British to American so much that it’s alarming). When young teenager Atti (Sebastian Croft) accidentally falls afoul of Nero, he is forced to join the Roman army and is sent to Britain, which is populated by Celtic tribes led by Boudicca (Kate Nash), a queen and warrior seeking to oppose the Romans’ firm rule. Atti himself is soon kidnapped by young Celt Orla (Emilia Jones), who is determined to prove to her tribesman father Arghus (Nick Frost) that she is enough of a warrior to fight alongside Boudicca, and the two soon form an uneasy alliance as they both try to survive the upcoming clash between the Romans and the Celts.

Like the show, the film takes several historically accurate facts about this particular period of history and places them throughout in the form of various skits, similar to something like Life of Brian or Mel Brooks’ History of the World, Part 1. However, instead of aiming for a sense of humour that’s both funny and engaging for younger or even older audiences, this movie aims for the lowest common denominator and practically bathes itself in fart jokes, poop jokes, pee jokes, vomit jokes, and incredibly obvious satire that even the youngest audience members would roll their eyes at. That’s not to say that juvenile humour can’t be funny, because under the right circumstances and with the right people involved it can actually be hysterical; the thing is, though, this movie really isn’t very funny. Between this film and Bill, you really can tell which one was made by the original series’ creative MVPs and which one was made by people who aren’t anything without them, because the humour here is so low-brow and juvenile that any attempts to actually appear educational and wholesome for younger audiences are instantly negated the moment that Derek Jacobi briefly shows up to throw up on someone’s feet, or when the movie stops for a full minute so that Sanjeev Bhaskar can urinate into a pot, or when they just simply do a lazy fart-related riff on the famous “I’m Spartacus!” scene.

Since the movie is so underwhelming in its comedy, with even the few chuckles from one-off gags being ruined by how it just repeats those same jokes over and over again, you’re more fixated on the film’s many other problems, including its flat direction that generates some incredibly lacklustre and disinterested performances from younger talent like Sebastian Croft and Emilia Jones and more experienced comedic actors; Nick Frost and Craig Roberts, for example, act like they’d rather be anywhere else than on set for this thing, while other performers like Lee Mack, Warwick Davis, Sanjeev Bhaskar and even Sex Education stand-out Ncuti Gatwa are completely wasted in much smaller roles. Dominic Brigstocke’s noticeably flat-lining direction also makes the execution of some of the jokes feel awkward and even incompetent; one involves flipping over an incredibly heavy table, but you can clearly see the table top jiggling around as the actors pretend to lift it up, which makes you wonder why Brigstocke didn’t notice that and call for another take. It’s just lazy filmmaking all around, adding insult to injury with its already laugh-free and juvenile script.

It tries incorporating other elements from the TV show, such as random intervals where it suddenly becomes a musical and characters begin singing right into the camera, but even that goes along with how everything that works in the show doesn’t work as well in this film, because movies are a much different format to television and need different ingredients to make it work. Sadly, as much as the books and the show are beloved by many, this Horrible Histories movie is mostly just rotten.

Horrible Histories: The Movie – Rotten Romans fails to capture the humour and sophistication of both the book series and television series with its incredibly juvenile humour instantly negating any attempts to be wholesome and educational for a younger audience, and lazy filmmaking that utterly wastes talented comedic actors like Nick Frost and Lee Mack as well as its real potential to be a good adaptation of the beloved source material.

Check out Horrible Histories: The Movie – Rotten Romans showtimes in London
on Walloh.