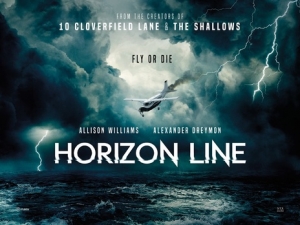 BASICALLY…: Two passengers (Williams and Deymon) on board a charter plane must fight for their lives when the pilot (David) suffers a heart attack…

As we prepare to enter yet another nationwide lockdown, cinemas are shuttering until 2nd December at the earliest, in the latest in a long line of bitter blows to the exhibition industry this year. While it’s a necessary move to protect civilians from the ongoing COVID-19 pandemic, it’s still disappointing to know that several movies scheduled for theatrical release this November will have to wait just a bit longer to reach the big screen, or even bypass it entirely to go straight to digital and on-demand.

One of the November releases that’s inevitably about to be set back is Horizon Line, a B-movie in every sense of the phrase which, quality aside, was very much made for the big screen. It’s easy to see audiences get swept up in its expansive visuals, high stakes, and certainly its particular use of lighting effects – so much so that it would not surprise me if, once it’s safe, it’s released as a 4DX exclusive – but unfortunately, none of that can really make up for a predictable plot, paper-thin characters, and questionable filmmaking qualities that prevent it from ever taking flight.

The film is about Sara (Allison Williams) and Jackson (Alexander Dreymon), a former couple whose union ended rather abruptly when she suddenly leaves without saying goodbye. One year later, the two meet up again in Mauritius for the wedding of a mutual friend (Doctor Who’s Pearl Mackie, speaking in an inexplicably false French accent for some reason), and after missing the ferry over to the nuptials they are forced to take a small plane over, piloted by Sara’s old friend Wyman (Keith David). Unfortunately, Wyman suffers a fatal heart attack whilst airborne, and it is now up to both Sara and Jackson to try and pilot the plane towards land before they run out of fuel, even if it means braving an oncoming storm or trying to cover up any fuel leaks.

A concept like this can certainly work, if the filmmakers spend their time accordingly trying to develop characters who you care about and want to see survive, as well as introducing very real stakes that constantly leave you on the edge. Sadly, Horizon Line doesn’t do a very good job at either; for a movie about two people trapped in a plane flying above an endless oceanic atmosphere, not only do you feel no sense of investment or urgency in this scenario, but you also don’t feel a damn thing for the people involved in it. The movie is surprisingly light on tension, with many of the developments being heavily telegraphed early on – one character picks up a crate of booze described explicitly as “rocket fuel”; take a wild guess about how it comes in handy later – and even when they actually come into play, it’s portrayed so preposterously that you’re half-expecting it to turn into a cartoon at any given moment. It might as well, because the visual effects dominate here even though they are noticeably unconvincing; the CGI is laughable, with shots of the ocean at times looking like a long-lost PS1 game, and a storm sequence is marred by heavy strobe effects which can be harmful to photosensitive members of the audience.

It falls on director Mikael Marcimain to mask his filmmaking inconsistencies with actors who can carry this thin material, but even then there are major faults. Allison Williams, who’s proven in the past to be a competent actor, is largely reduced to panicked screams which can become grating after a while, although Alexander Dreymon fares worse in a completely wooden turn that lacks any form of charisma or emotion that makes you wonder whatever she saw in him in the first place. In the actors’ defence, neither of them have been paired with particularly salvageable characters, who don’t score many points in the likeability department early on and come across more as a couple of douchebags who are entirely self-absorbed and not at all considerate of other people’s feelings or desires. The levels of caring only decline further even when they’re on the plane, because they tend to do things which are so dumb and cause them to end up in such a far worse predicament that you’re rooting for the ocean to just swallow them whole. The only character who could have saved the movie is Keith David, but that’s mainly because it’s Keith David, and once he’s out of the picture then the movie gets a lot less likeable and far more grating as you’re just waiting for it to be over and done with.

The writers on this movie also wrote the script for 10 Cloverfield Lane, another movie which primarily takes place in a singular setting and even has central characters dealing with personal issues like running away from a relationship, but that movie is far more clever, a lot more suspenseful, and actually takes the time to develop its characters enough to make you want to root for or against them for perfectly solid reasons. This movie, however, feels like a lazier version of that script, with the themes barely focused on and the characters far thinner on both paper and screen, with most of that side-lined for a scenario which should feel a lot more exciting and action-packed than it is, but is instead an empty and rather dull ride that leaves you just wanting to watch anything else instead.

Cinemas may be closing for the month, but you’re missing out on nothing by not seeing this on the big screen.

Horizon Line is a dull, preposterous and even lazy survival movie that gives you very little reason to care about the scenario or the characters directly involved in it, with not even the filmmaking being strong enough to leave you excited despite the high concept, resulting in a lame B-movie that never really takes flight.

Horizon Line was due to be out in cinemas across the UK on Friday 6th November 2020, but due to the latest government announcements those plans have been cancelled. A new release date has not yet been announced.