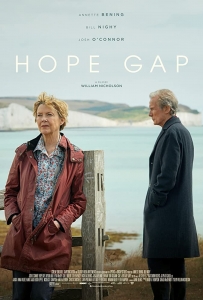 BASICALLY…: Grace (Bening) is shocked to learn that her husband Edward (Nighy) is leaving her after 29 years of marriage…

Last year’s Marriage Story was a hard-hitting, emotional, and sometimes uncomfortable portrait of a disintegrating union, so to call Hope Gap the Boomer Edition of that movie seems like a cheap way of describing this one, but honestly it’s the most apt way to approach it.

Writer-director William Nicholson, best known for his scripts to films like Shadowlands and Gladiator, adapts his own play The Retreat from Moscow into a moody kitchen-sink drama that feels like it’s constantly meandering towards an obvious conclusion, and doesn’t always feel as cinematic as it’d like to be, but is saved by the skin of its over-written teeth by an impressive trio of performances that show how even the flimsiest of scripts can feel powerful just by the skills of its actors alone.

The movie takes place mostly in a small coastal town in the South of England, where Grace (played by an English accent-sporting Annette Bening) and Edward (Bill Nighy) have been married for almost 29 years, with their grown son Jamie (Josh O’Connor) occasionally visiting them from London. During one such visit, Edward drops an enormous bombshell that he, being dissatisfied with his marriage to the domineering Grace, has fallen in love with another woman, and intends to leave his wife of nearly three decades to be with his new partner. Initially, Grace does not take the sudden break-up well, and it falls to Jamie to act as their in-between as he himself tries to make sense of his parents’ split, while also trying to mediate their (read: Grace’s) growing acrimony as they come to terms with what has happened.

Nicholson’s script attempts to present the situation as not just a black-and-white issue, with neither Grace nor Edward necessarily being right or wrong, but the illusion quickly falls apart the further it gets into its drama, because you start to see that there really isn’t a whole lot to take away from it. Like an alarming amount of stage-to-film adaptations, its theatrical origins shine through in over-written dialogue that sometimes doesn’t feel natural coming from certain characters, as well as extended scenes that barely move from its singular location. As a director, Nicholson encourages a slow-burn pace designed for the drama to be properly absorbed, although it can start to become cloying as the script gradually devolves into one repetitive conversation after another. What might work for the stage doesn’t necessarily mean it will work for the screen, and it appears that Nicholson, in transferring his story from one medium to another, has somewhat neglected the fact that cinema audiences need to be entertained in different ways to theatre crowds, resulting in Hope Gap sadly not offering much in terms of deep, meaningful drama or even and intriguing enough story to carry itself.

It is left to the three central performances to pick up the load that the script and direction can’t quite manage on its own, and luckily Nicholson was smart enough to get a trio of incredibly talented performers to act out his script in ways that, for a moment anyway, actually leave you slightly invested. Annette Bening, Bill Nighy and Josh O’Connor are all uniformly excellent here, each of them finding ways to humanise characters who might have come across as one-dimensional in lesser hands, even when the characters themselves can be a massive handful. Grace, Bening’s character, is exceptionally difficult to sympathise with for a majority of the film; she’s abrasive, condescending and even abusive at times (during an early shouting match, she just straight up hits her husband), and that’s before Nighy’s Edward musters up the courage to leave. Once he does, she becomes pretty nasty to a lot of people, even her own son who’s doing his best to level things out, to a point where you can fully understand why Edward would want to walk out of this marriage; she’s certainly upset, but that’s not an excuse to treat other people like absolute trash. Despite the character’s inherent unlikability during most of the movie, Bening grasps onto Grace’s bitterness and works with it to portray a woman who’s been scorned and apprehensive, but feels like someone who could actually exist in real life; again, it’s the power of these actors’ incredible skills that they can take thin characters like these on paper and really bring them to life in unexpected ways.

The film is lucky to have these exceptional actors on board, because otherwise Hope Gap is a rather dull and dry slog that sadly doesn’t amount to much. Nicholson can’t be faulted for at least trying to make a compelling drama, but the execution – acting and pretty seaside views aside – is a little messy and unfocused, and the narrative itself doesn’t have as much depth to it as it would have you believe. If you’re eager for a much more compelling and genuinely provocative movie about a marriage falling apart, there’s plenty of devastating titles out there like Blue Valentine, Kramer vs. Kramer and Marriage Story that’ll fit the bill instead; this feels like the far safer option for audiences who don’t want to sit through all of that heavy drama, but by choosing this meagre and unsatisfying entry they’ll be missing out on a separation story which’ll stick with you for far longer.

Hope Gap is a moody, but somewhat unsatisfying, drama about a marriage coming to an end, which writer-director William Nicholson tries to inject with heavy drama but can’t disguise how there isn’t much underneath its surface, and how it largely relies on the admittedly strong trio of performances from Annette Bening, Bill Nighy and Josh O’Connor to carry it through instead of its less-than-solid script and messy execution.

Want to decide what the movie’s like for yourself?
Check out Hope Gap showtimes in London
via