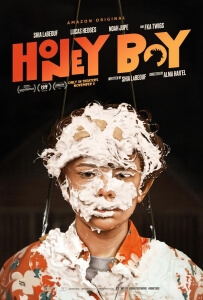 BASICALLY…: A young child actor (Jupe) tries to cope with his rising star, his overbearing father (LaBeouf) and personal issues when he becomes a young man (Hedges)…

It’s easy to mock celebrities who go through a very public meltdown – people like Britney Spears, Charlie Sheen, Lindsay Lohan and Justin Bieber come to mind – but it’s incredibly hard to remember that, in some of these cases, there is a deep personal tragedy that is driving their erratic behaviour. Take Shia LaBeouf, for instance; yes, his numerous run-ins with the law for public drunkenness and his bizarre publicity stunts (such as walking a red carpet wearing a paper bag saying “I Am Not Famous Anymore”) make for strong talking points, but if you dig a little deeper into his troubled past you’ll find some pretty disturbing stuff that would make anyone in his situation turn to drink and drugs.

LaBeouf lays it all out in the open with his very personal passion project Honey Boy, which he wrote during a stint in rehab and recruited documentary filmmaker and personal friend Alma Har’el to direct. The film that they made together is therapeutic, certainly, but also a very revealing chronicle of someone who people like to judge before they even know them.

The film’s Shia surrogate is an actor named Otis (Lucas Hedges), who we first meet on the set of an explosive Transformers-esque set in 2005. He is, as you’d probably expect, a bit of a loose cannon, drinking heavily in his trailer and ending up in car crashes which get him arrested. Whilst in rehab, he is – similar to how LaBeouf was in real life – encouraged to write down details about his childhood as a means of exploring what made him the person he is in the present; from here, we cut to ten years prior, when a younger Otis (Noah Jupe) is a child actor living with his deadbeat father in a rundown motel. His father, in the most meta casting decision of the year, is played by LaBeouf himself, and is constantly pushing his young son to be the best that he can possibly be, while simultaneously inflicting all of his bad habits onto the young boy.

The central core of the film is the relationship between the Otis character and his father, which of course LaBeouf frames as a semi-autobiographical version of his own paternal relations, and it is also where the film’s biggest accomplishments originate from. For one, LaBeouf gives one of the year’s greatest performances, in what could not have been an easy role for him to play from a psychological standpoint – because after all, playing your own father who, if he’s anything like he is in this movie, is a pretty irredeemable monster must toy with your emotions on some level – but he brings such fierce tenacity to the part, even to a point where he’s legitimately scarier than many horror movie monsters that have shown up in cinemas this year, that he completely sinks into it. It is a fearless, ego-less performance, and he shares such great chemistry with young Noah Jupe (also great, as is Hedges as the older Otis) that later scenes where he is just being the absolute worst father imaginable end up being all the more heart-breaking.

As the film explores more of the sharp divide between father and son, and subsequently what caused this young kid to become the hothead we associate him with being, it becomes clearer that this is not a film where there are necessarily happy endings, or even endings for that matter. The loose structure, and rather abrupt finish, might not click for some, but then again maybe that is the point; lest we forget, this project started out as a therapy project for LaBeouf to get over his own problems in rehab, and for all we know he probably never intended for it to be shown in cinemas worldwide when he first wrote it, so the lack of a traditional format can be easily forgiven here. It is far more of a personal endeavour for LaBeouf to artistically express his deep resentment of his upbringing, which seem to have had such devastating psychological consequences that he became the person that the tabloids loved to mock, and it is powerful stuff to watch play out on screen, under sharp direction from Har’el who doesn’t let the raw emotions slip between her fingers. She makes you feel as though you’re trapped in this room alongside young Otis with this nasty piece of work who calls himself a father, and like Otis you’re helpless when under his manipulative, emotionally sadistic watch, especially when his charisma is so strong and alluring.

This year in general has been a major turning point for LaBeouf, who between this and his equally excellent work in The Peanut Butter Falcon is finally putting him back in people’s good books as an actor worth respecting. As someone who never even disliked the guy, his very public outbursts aside, I can completely admire a person like him who certainly had it rough in the not-too-distant past, but seems determined to move on and let his work speak for him. Though my personal preference still lies with The Peanut Butter Falcon in terms of overall love for a movie, I did find myself utterly captivated with this deeply personal and very unique exploration of a man’s very troubled beginnings. It’s a film that I will be thinking about long after I see it, just based off of the raw display of emotion that LaBeouf brings to the project alone, because after all it’s his baby, and he’s done a brilliant job at nurturing it to maturity – which, again, is much more than I’d care to say about the actual parent in this situation.

Honey Boy is a deeply personal and highly emotional outlet for writer Shia LaBeouf to vent his frustrations about his troubled upbringing, which are dramatized through director Alma Har’el’s tight direction and some truly great performances, particularly LaBeouf who gives one of the year’s best performances as his own on-screen father, all of which make it a unique and unforgettable experience that’s easily going to end up as one of the year’s best films.

Want to decide what the movie’s like for yourself?
Check out Honey Boy showtimes in London
via