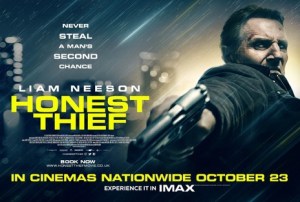 BASICALLY…: When he falls in love, a prolific criminal (Neeson) intends to turn himself in and start a new life – but he is soon double-crossed and sets out for revenge…

With that one phone call – you know the one – in the first (and best) Taken, Liam Neeson suddenly evolved from a respectable dramatic actor into a hardcore badass action hero, which appears to have defined most of his filmography since. Sure, not everything he does nowadays is an action movie, but Neeson’s movie-star image seems to be almost entirely contingent on his ability to subdue bad guys with that gruff voice of his, and there’s only so much of that which audiences can take before we start to get a little sick of it.

His latest venture into action movie territory, Honest Thief, sees Neeson in very familiar territory – perhaps far too familiar – which, though far from his worst, certainly isn’t going to be remembered as one of his best either.

Neeson plays Tom Carter, a prolific bank robber who’s been dubbed the “In-and Out Bandit” for his ability to break into safes and steal money without ever getting caught. It’s not until he meets and falls in love with a kindly woman named Annie (Kate Walsh) that Tom decides that he’s had enough of the criminal life, and plans to turn himself in along with the $9 million he’s stolen over the years in exchange for a reduced sentence, so that he doesn’t have to be too separated from Annie. However, when corrupt FBI agents Nivens and Meyers (Jai Courtney and Anthony Ramos) decide that they want to take the money for themselves, they pin an agent’s murder on him and force him to run from the authorities, which Tom then uses as motivation to get revenge on the agents and clear his name before his chances of a second life are gone forever.

Sometimes, it feels unfair to criticise a movie for a lack of originality in its plot because, let’s be honest, completely original concepts are much harder to sell, let alone come with the ideas for – but in the case of Honest Thief, it’s running entirely on plot devices that so many of us have seen in an action movie more than a dozen times (the redeemed criminal, the corrupt law enforcement, the framing of said criminal for a crime they didn’t commit; you name it, it’s all here). It’s a cluster of things that you’ve more than likely seen in any other Liam Neeson action flick, only done on a noticeably smaller budget which often shows in its limitations on what it can do with its action or locations; Neeson himself is mostly confined to hotel rooms throughout a large chunk of the movie, and the surprisingly few one-on-one combat scenes are either flimsily choreographed or shot blandly (there is also an explosion, but it’s one that has the kind of blatantly CGI fire you’d find on After Effects).

Sadly, not much else in the script can easily distract from its constricted budget or lack of originality. Neeson doesn’t sleepwalk through this, and he is a likeable enough presence, but his character is easily one of his lamer action heroes; he doesn’t even get to kill anyone in this film, because he makes a point of saying that throughout his entire criminal history, even during his time as a Marine, he has not murdered anyone in cold blood, and he continues to stick to that throughout the rest of the movie. Instead, Neeson spends a lot of the film with Kate Walsh, with whom he has a fine if not outstanding chemistry, although she too is just as guilty as the extremely dumb villains of doing things in certain situations that nobody else would think to do, only doing them because there would be no movie if she stays sensible. The only character who’s not only interesting but entirely worthy of being the lead in his own movie is Jeffrey Donovan as a conflicted FBI agent on Neeson’s trail; there’s a whole sub-plot of him trying to bond with his ex-wife’s dog, which practically goes everywhere with him, and I love that there’s another movie going on at the same time as this Liam Neeson-starring crime thriller which is this uplifting comedy-drama about a man learning to be a better person by taking care of this adorable little canine. That thought alone made Donovan the best part of the movie for me, because he plays it straight in the same way he would if this were indeed the other movie, which makes it all the more amusing to think that he’s wandered in from a completely different project into this far less charming movie about bank robbers and corrupt FBI agents with car chases and shootouts.

Except, none of that is as exciting or entertaining as it should be. Honest Thief mostly feels like an obligatory project, made by people who didn’t necessarily want to be stuck with this stale material but were roped into it by contractual requirements which didn’t provide many loopholes out of it. I’ll give credit to director Mark Williams that he at least doesn’t make his film feel entirely like a direct-to-video shelf-filler – bland cinematography and restricted locations aside, he does what he can to make it look as theatrical as he can with the budget he’s been given – but it’s not enough to save a script that does virtually nothing to set itself apart from any other Liam Neeson action movie that you could be watching instead. There’s no real reason to check it out, unless you’re a Neeson completionist or starved for big-screen action content that is sorely missing from exhibitors right now – but even then, there’s far better (if limited) choices out there than this pretty lame one.

Honest Thief is a sub-par action movie that features very little originality in its script or many characters who are worth caring about, with even Liam Neeson left to play a pretty lame hero who’s mostly confined to small locations due to the film’s noticeably low budget, and not given much to do in blandly choreographed fight scenes which just make you want to watch nearly any other Neeson action movie instead.

Honest Thief is out now in cinemas across the UK.