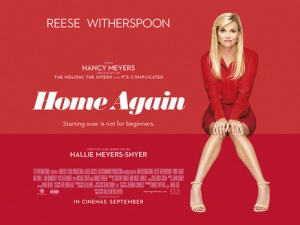 BASICALLY…: A single mother (Witherspoon) has her life change unexpectedly when she allows some young filmmakers to lodge in her guest house…

The most surprising thing about the Reese Witherspoon-starring romantic-comedy Home Again, for a movie that otherwise contains no real surprises, is that it WASN’T written or directed by Nancy Meyers.

There is still a connection to the mind behind What Women Want, The Holiday and The Parent Trap (amongst a few others), because this film marks the writing and directorial debut of her daughter Hallie Meyers-Shyer, and for her first movie she’s made something that would easily fall right within her mother’s eclectic filmography of movies that are harmless, light and pleasantly likable without necessarily breaking any kind of mould.

The film focuses on single mother Alice Kinney (Reese Witherspoon), who we learn is the daughter of a highly-regarded and long-since-passed film auteur, and who has also just moved back to Los Angeles with her two daughters after separating from her husband, music mogul Austen (Michael Sheen). While out celebrating her 40th birthday, she meets a trio of young filmmakers – director Harry (Pico Alexander), writer George (Jon Rudnitsky), and actor Teddy (Nat Wolff) – who are in town to try and get a feature version of their award-winning short film made, and soon one thing leads to another and all three of them begin lodging in Alice’s guest house whilst they go around town having various meetings with producers. All the while, they begin bonding with Alice’s family and, in Harry’s case, with Alice herself as she slowly begins to come to terms with what it is she really wants in life.

From listening to all that, you would expect this movie to go no deeper into its themes and characters, and just stick to being light and fluffy wish-fulfilment fantasy all throughout… and you’d be right. Home Again doesn’t offer any real twists or turns, or anything to really separate itself from the many other romantic-comedies out there, even the ones made by Nancy Meyers in the past, which doesn’t bode well for its longevity or its prevention from falling into rom-com obscurity. There are still plenty of genre clichés that this movie abides by, from the awkward multiple suitors to the classic one of rushing to the daughter’s school play on time, some of which work for this kind of film and some that are too dated even for a movie that by all accounts is dated. Don’t go in expecting anything different from what this movie is being advertised as, because it just is one of these films that Reese Witherspoon would have still done in the early 2000s regardless of where she was in her career at the time.

However, if a light-hearted and silly rom-com is exactly what you’re looking for, then there’s a fair amount of things to enjoy about this film. It is certainly a very likable film, and getting charming actors like Reese Witherspoon and Michael Sheen to carry this film really help extend that charisma, and even though there isn’t a whole lot that’s really at stake during the course of this film it’s still nice to see these enjoyable characters interact with each other and genuinely feel like they’re having a good time. Even when the film falls back on some painfully old clichés it still somehow ends up being charismatic about it, and Hallie Meyers-Shyer really feels like she’s learned a lot from her filmmaker mother in how to really mine a cast and situation for as much lovability as she can. However, there are a couple of notable faults to be found even in the film’s overall upbeat attitude, and sadly that’s with one of the filmmaker characters. While Nat Wolff and Jon Rudnitsky’s respective parts are both very charming and likable, Pico Alexander – the de facto leader of the trio – is stuck with an uncharismatic, smarmy and just plain douchey Entourage reject of a character, and unfortunately he’s meant to also be the main romantic interest for Witherspoon so that means a lot of scenes of him just being smug and self-satisfied that are actually meant to be winning her over. It might have worked with another actor, because Alexander just isn’t strong enough to actually make it work, but making him the one that Witherspoon has the hots for just makes him that much more insufferable.

But despite the chinks in the armour, and that aside it’s not a wholly great movie or even really that memorable, Home Again still works best in the moment, and should satisfy your cravings if you’re after something a bit more light-hearted to watch, especially in this miserable day and age.

Home Again does a serviceable job at being a light but suitably likable romantic-comedy that may not have any lasting power, but is a completely fine movie to enjoy in the moment.