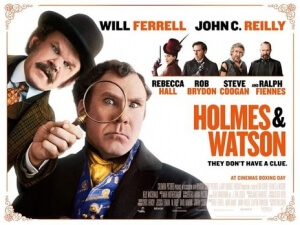 BASICALLY…: Sherlock Holmes (Ferrell) and Dr.  Watson (Reilly) use their brilliant minds to stop the evil Moriarty (Fiennes) from a major assassination…

Let’s just get this out of the way early: Holmes & Watson is really, really bad.

It’s so abysmal that distributor Sony apparently hated it so much that they tried to sell it off to Netflix, only for the streaming service to turn them down. That’s already a red flag when the same company that also released Grimsby, The Emoji Movie and Slender Man thought that this movie was so painful and potentially damaging that they tried to get rid of it, but to quote Sebastian Stan in I, Tonya: “you made your bed, now die in it”.

The third major pairing of Will Ferrell and John C. Reilly, after Talladega Nights and Step Brothers, is easily their worst together as well as one of the worst that either actor has been involved in, as it is with many of the other cast and crew members working on this painful embarrassment of a comedy. Intended as a comedic take on the tales of Sherlock Holmes and Dr. John Watson – played by Ferrell and Reilly respectively – the film sees both men being called upon to stop the assassination of Queen Victoria (Pam Ferris) by dastardly criminal Professor James Moriarty (Ralph Fiennes). But plot is merely an afterthought in this film, as much of it is padded out with lengthy gags and line-o-rama quips that go on for way too long and simply aren’t funny at all, and scenes where both Ferrell and Reilly just act like screaming man-babies with no rhyme or reason for doing so. It’s a trick that seemed to work for some audiences back when Step Brothers first came out ten years ago, but even those people have grown up significantly in the past decade whereas it seems that this type of humour and the performances that Ferrell and Reilly give here most certainly have not.

Whatever you may think of Step Brothers or Talladega Nights, those films at least had the distinction of having a talented individual like Adam McKay direct and co-write with Will Ferrell, whereas here it’s Etan Cohen – who previously directed Ferrell in Get Hard – filling in as both director and writer, but it’s less like Cohen is directing and more like someone doing a cheap knock-off version of McKay’s style calling the shots, and failing miserably to capture the truly bizarre nature he brought to those other Ferrell/Reilly collaborations. Cohen has no consistency when it comes to structuring his scenes, which will sometimes just suddenly end with no idea of a punchline, and when a strange idea does blossom, such as a musical number late into the film, it comes completely out of nowhere and catches you off-guard as there has been no lead-in to any of this kind of madness whatsoever, unless you count several scenes of Ferrell and Reilly mugging relentlessly into the camera, along with other actors who are completely wasted like Hugh Laurie, Ralph Fiennes, Rebecca Hall, Rob Brydon, Steve Coogan and especially Lauren Lapkus in a role so terribly executed that it needs to be seen to be believed. He also wants to try and parody the stylised thought process that Guy Ritchie brought to his own Sherlock Holmes movies, such as a near-exact copy of the scene where Holmes is fighting an opponent and is thinking of convoluted ways to gain the upper hand, but they don’t work as the script doesn’t do anything that funny with them, and especially when those movies were far funnier than this movie is.

Even worse is Cohen’s script, which aside from being painfully unfunny is filled with gags that just don’t make any sense. It’s ridiculous to go after a film like Holmes & Watson for having severe historical inaccuracies, but they are so distracting that it’s hard not to notice them; a running joke involves a much younger Mrs. Hudson (Kelly Macdonald) suddenly emerging from the bedroom with several historical figures, one of them being Albert Einstein as we know him with his elderly looks and wild hair despite him being significantly younger at this point in time in real life; meanwhile, the climax of the film takes place on board the Titanic, which wasn’t even built when Queen Victoria was still around. It’s things like this that make the film insultingly stupid, as it treats the audience like utter morons who won’t be able to pick up on these glaring holes when they’re too busy laughing at all the dumb slapstick on-screen. It makes me wonder if this script somehow started out as an Adam Sandler vehicle, because the way that the humour is portrayed, how certain characters are written, and how the direction seems so incompetent and overwhelmingly dumb, it really does feel like a lost Happy Madison production that somehow found its way into the hands of more competent funny people like Will Ferrell. There are plenty of scenes that reinforce that thought, such as an extended gag that sees a drunken Holmes and Watson try and send a telegram to their respective love interest, obviously a riff on drunk texting, one that’s been plastered all over the trailers where Reilly’s Watson attempts to take a “self-photograph” using the camera legs like a selfie stick, and painfully obvious allusions to Trump that you’re shocked that the scene doesn’t end with the characters winking heavily into the camera lens.

I feel so stupid, not just from watching this awful, completely atrocious comedy, but for the fact that with my end-of-year lists I usually treat any release that comes out the week between Christmas and New Year’s as invalid (mainly because the lists are written way in advance), because that means I can’t even place Holmes & Watson on a deserved spot on the Worst Of list; for now, just count it as a dishonourable mention, but it really deserves far worse than that.

Holmes & Watson is an atrocious comedy that wastes its comic potential on gags that are painfully unfunny and nonsensical, and is filled with talented actors like Will Ferrell and John C. Reilly making complete and utter fools of themselves. You don’t have to be the world’s greatest detective to deduce that this is one you should skip.