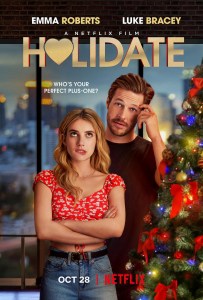 BASICALLY…: Two holiday-hating singles (Roberts and Bracey) decide to become each other’s plus-ones for the forthcoming year of family get-togethers…

At several points during the movie Holidate, our leading couple swap a number of critiques about the predictable formulas of romantic-comedies, and how clean and cookie-cutter-like they portray romance in the movies. What they don’t know is, they are ironically having these conversations in a movie that is every bit of the predictable rom-com they are supposedly sending up, not even in a self-aware manner; it falls into the trap that a lot of recent films in the genre have done that think they’re being clever by referencing several rom-com clichés in a derogatory manner, only to then go on and actually do those exact clichés as though they’re all it lives by (see also: Friends with Benefits, Crazy Stupid Love, Isn’t It Romantic etc).

Holidate isn’t really much different than those examples, except it’s perhaps surprisingly a lot more raunchier than you’d figure a film with a plot straight out of a Hallmark holiday movie would be. F-bombs are left and right here – to a point where the very first line is someone using it to curse the holidays – as are jokes about sex, drugs, and even bowel movements during one crucial sequence. It’s not enough, though, to save the movie from its own trappings of lame rom-com tropes done in ways that often aren’t as funny (albeit unintentionally) as the Hallmark movies it’s clearly trying to put its own spin on.

The film opens as we’re introduced to both Emma Roberts’ Sloane and Luke Bracey’s Jackson; both are weary of the holiday seasons, as they are required to spend them with either nosey and overbearing family members, or the overly-enthusiastic families of their closest ones. After a chance meeting at the mall, Sloane and Jackson decide to become each other’s “holidates” – a term that indicates a plus-one at all holiday gatherings throughout the year, as inspired by Sloane’s free-wheeling Aunt Susan (Kristin Chenoweth) – and so throughout the year they team up for everything from New Year’s Eve to Valentine’s Day to Easter to Halloween to Thanksgiving to eventually Christmas. Of course, it wouldn’t be a rom-com if these two initially platonic people didn’t decide that they are, indeed, starting to fall for each other throughout all of this – and wouldn’t you know it, that’s pretty much what happens.

Aside from its raunchier tone, very few surprises are in store here; everything you can predict could happen in a rom-com very likely will happen, from awkward meet-cutes to run-ins with exes to third-act breakups and so on. It’s part of what makes most rom-coms nowadays completely boring to write about, because chances are that they will be good or bad for the same reasons as the previous ones, whether it’s a predictable plot or a plethora of mostly unfunny side characters or even the fact that despite thin material the two leads do actually have decent chemistry with each other. Both Emma Roberts and Luke Bracey do fine here, but again I can say that about the two leads from the last rom-com I watched, or the one before that; Holidate sets no new bars in anything that people normally associate with the romantic-comedy genre, and instead just is another throwaway example that nobody will probably remember afterwards.

It perhaps was the intention of director John Whitesell and writer Tiffany Paulsen to structure the plot and characters like how they would be in a typical Hallmark Channel holiday movie, only to then inject it with enough raunch to fill an entire American Pie sequel, but honestly the movie would be no different if all of that naughtiness was removed. It’s still a script that’s just as formulaic as you’d find in a Hallmark or Lifetime movie, complete with some outdated “Men are from Mars, Women are from Venus” ideologies that serve almost nobody in 2020, right down to a cheesy climax which – you guessed it – involves running towards the departing love interest and delivering a big speech with the assistance of some back-up carol singers who happened to be right there in the scene. Like I said, it’s a movie that’s apparently okay with referencing typical rom-com clichés, but is too afraid to completely subvert them altogether, contradicting its own messages in the process.

Credit where credit’s due, though, because nobody would have thought a movie like Holidate, with its inviting poster and trailer suggesting a more family-friendly tone, would be almost as crude and foul-mouthed as a Seth Rogen comedy. I have to admit, the fact that it’s more adult-oriented came as a bit of a surprise when I pressed play on this, because who in their right mind could have predicted that five minutes into this movie, there would have been a line of dialogue referencing the fact that someone let another person come in their mouth, or later on there would be a scene where our two leads are smoking a joint in a hospital waiting room like it’s Harold and Kumar all of a sudden? Both Roberts and Bracey are very game for a lot of this raunchy material, which definitely helps their performances – Bracey, who had previously underwhelmed in movies like The Best of Me and that awful Point Break remake, is a lot more charismatic here than in anything I’d seen him in previously – and as previously stated, the two do have a fun connection on-screen.

Overall, though, it’s not strong enough or far-reaching enough to be anything more than a typical rom-com that just happens to have a bit more swearing in it.

Holidate can’t overcome its typical rom-com trappings to seem any different than virtually every other film in the genre, with not even a surprisingly raunchy tone or solid chemistry from leads Emma Roberts and Luke Bracey doing much to add to its potential, instead squandering it on clichés and tropes that you should be more than familiar with by this point.

Holidate is now streaming on Netflix.