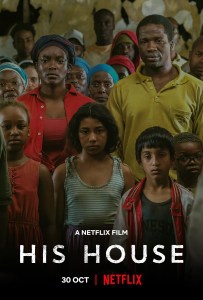 BASICALLY…: A refugee couple (Mosaku and Dìrísù) arrives in England from South Sudan, but face unexpected disturbances in the town they have been placed in…

In a lot of haunted house movies, the biggest question any viewer has on their mind is, “why don’t they just leave the house?”. There are, they would argue, many good reasons for the people staying somewhere that’s haunted by ghosts, demons, aliens or whatever to just simply bolt out the front door and never look back, one of them being that unless said terror somehow latches itself on you no matter where you go (an idea explored by the likes of Insidious and Sinister, to name a few) the hauntings would be over in a heartbeat.

For Bol and Rial, the two main characters in Remi Weekes’ His House, it’s just not that simple. The whole movie hinges on the fact that they have been explicitly instructed not to leave their home under any circumstances, because doing so would hurt their chances of being accepted into the new world they have arrived in. They are asylum seekers, having migrated from a country where things are arguably more horrifying than their new digs, and leaving might as well be a request to be sent back there, so they’re kind of screwed wherever they end up going. It’s part of what makes Weekes’ film more effective than any other typical haunted house movie, because there are far more real stakes at play should they decide to actually leave the haunted premises they’ve been offered, but it also raises psychological issues about what’s more terrifying: the house and its many otherworldly occupants, or what’s just outside of it.

We first meet Bol and Rial (played by Ṣọpẹ Dìrísù and Wunmi Mosaku respectively) as they are being holed up at a British detention centre for undocumented migrants, having travelled from war-torn South Sudan under rather traumatising circumstances. They are offered a small dilapidated council house in a nearby town, where local minder Mark (Matt Smith) hands them over the keys for the couple to pass the time until their application for asylum is granted. However, the two of them soon find that there is a sinister presence lurking behind the walls, taunting them with disturbing visions of their young child who had drowned during the migration, which Rial becomes convinced is the workings of a powerful witch that has cursed them and their house for reasons that become clearer as the film goes along.

Even before the ghosts start turning up, the movie is a tense sit; through a tight script and tighter direction, Weekes is able to communicate a feeling of dread and anxiety from the point of view of being a refugee in a completely new environment, making things from finding their way around the area to awkward small-talk with the neighbours seem like the most painful and claustrophobic experience. The filmmaker is apt at portraying the trauma of escaping a war-zone – in the few glimpses we get of the main characters’ lives before migrating, a man is casually set on fire and calmly walks on to his crispy death, which is a chilling image no matter what genre your movie’s working with – and makes far too telling parallels with life in a slightly more civil British neighbourhood, where loud gangs wander the streets at night and a security guard at a department store keeps his racial-profiling eye closely on one of them as they peruse the clothing section. It’s very well managed and executed by Weekes, who is reliant on details not many audiences would even think about to deliver a situation where anything can, and likely will, bring less fortune to our main characters, given most things from their status to their native origins which are ripe for mockery amongst ignorant passers-by.

While it is an effective and unique way to tell the story of refugees starting a new life in a different place, despite all the hurdles they are being forced to jump over in order to fit in, His House is also a rather chilling supernatural horror with certain imagery and a few ideas that are truly creepy. Weekes, alongside cinematographer Jo Willems, certainly shows an intelligent way to shoot ghosts in moody lighting that’s bright enough to see what’s happening but also dark enough to leave you all the more scared by what’s emerging out of the pitch blackness. Shots of eyes staring out of the holes in the wall are deeply unnerving, and even better the movie rarely resorts to providing lazy and context-less jump-scares to get a good fright out of the viewer; the few that are present have a reasonable build-up, and more often than not actually do have a point to them.

The acting is also solid, with both Ṣọpẹ Dìrísù and Wunmi Mosaku delivering compelling turns as a couple that’s both frightened but also remorseful for past mistakes that led them to being refugees in the first place. You feel not just their fear, but also their frustration as they cannot explain the situation to anyone no matter how hard they want to, and even if they did tell someone about their current living conditions then the alternative is perhaps a far worse fate for them. Meanwhile, Matt Smith is not in it for long, despite being the most prolific actor in the ensemble, but he’s fine whenever he shows up; he’s much more of a supporting figure, something that might not be the best news for Smith enthusiasts, but that ensures the focus remains exactly where it needs to be: on two people caught between a rock and a machine gun, who have to decide which is the better fate: living with ghosts, or somewhere that might not let them live for too long.

It’s a solid little horror that’s worth checking out, but maybe not in a house where the wallpaper’s starting to peel away.

His House is an effective supernatural horror that sees writer-director Remi Weekes deliver a creepy ghost story on top of a compelling story of two asylum seekers experiencing trauma and remorse for their past experiences, which add up to a spooky experience that’s more than appropriate for the Halloween season.

His House is now streaming on Netflix.