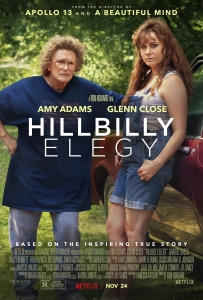 BASICALLY…: Yale law student J.D. Vance (Basso) must return to his Appalachian family in Ohio after a personal crisis…

There is a scene early on in Ron Howard’s Hillbilly Elegy, based on the 2016 memoir by J.D. Vance, where characters lightly poke fun at Vance’s “redneck” background, to which he takes offense at being relegated to a conventional stereotype. It’s a scene that would have had merit, except that mere minutes before, he was shown to have difficulty knowing different types of wines and couldn’t even tell his cutlery apart, as though he had never come across any of these things before.

That’s one of the many, many problems with this movie; it cannot seem to decide whether or not we should be sympathetic towards the lead character and his lowly upbringing, or mindlessly gawk at it like a hot-button reality television show. Either way, it’s not worth caring about.

It’s a shame, because this is a movie with a ton of pedigree behind it; beyond Howard’s involvement, awards-favourite actresses like Amy Adams and Glenn Close are in core leading roles, The Shape of Water co-writer Vanessa Taylor adapted Vance’s book for the screen, and it contains a lot of subject matter that, when done right, can tick numerous awards season boxes (Poverty? Check. Addiction? Check. Inspirational quotes from tough but wise maternal figures? That’s like half the movie’s dialogue). Unfortunately, Hillbilly Elegy falls in line with films like Extremely Loud and Incredibly Close which clearly want to reach for all the awards it can gather, but whose ambition ultimately clouds over its actual quality.

The film primarily takes place over two time periods; the mid-to-late 90s when young Vance (a compelling Owen Asztalos) is living with his mother Bev (Adams) and his “Mamaw” (Close), Bev’s mother, in the backwater suburbs of Ohio; and the early 2010s when adult Vance (Gabriel Basso), now studying law at Yale, is suddenly called home to deal with a family crisis. Naturally, the two timeframes switch back and forth with one another, as we see young Vance be subjugated to Bev’s harsh and selfish parenting before she eventually falls into drug addiction, with Mamaw left to pick up the pieces and steer him in the right direction, and then adult Vance dealing with several complications surrounding his worsening mother.

One thing that you should give the movie credit for, overall quality aside, is that you can tell there is at least effort going into this. Howard’s direction is competent enough, though not especially outstanding, and the performances themselves are certainly strong, with both Adams and Close going all in with their larger-than-life characters. Sadly, much of it is wasted on a script that fails to find much of a reason to care about any of it; Taylor’s adaptation struggles to find a thorough structure that’s sustainable enough to know and understand most of these characters, giving us very few moments alone with them when it’s busy transporting us from one timeline to the next. As a result, you don’t know enough about any of these people other than what’s being given to you at face value, and so there’s no apparent reason for you to get emotionally invested in what should come across as very tragic arcs involving heroin overdoses, child abuse, juvenile delinquency, and even the odd moment of setting a drunken spouse on fire. And yes, that’s something that really happens here.

Because you’re not actively invested in what’s going on or who it’s happening to, the film can be quite the slog to get through. There was a moment about halfway through where I thought it was beginning to wrap everything up, because it was starting to feel like we were entering some sort of dramatic climax, only to find that there was still another hour left to go, much to my surprise and frustration. It feels so much slower because it is also a very repetitive movie, with so many scenes of Adams’ addict mother doing spiteful things like physically and verbally abusing her children, and Close applying endless sass and wisdom to the younger version of our main character as though she’s a white working-class Yoda but with an ugly dress sense and even more unappealing glasses. Howard keeps things as consistent as he can with a muddled script like this, as do the actors, but ultimately it’s not enough to get you fully hooked on a story that wobbles underneath contrivances and inauthenticity, or characters who barely make an impression (spare a thought for the likes of Haley Bennett and Freida Pinto, as Vance’s sister and girlfriend respectively, both of whom are side-lined to a point where you wonder why they’re even in this story to begin with).

Upon publication, Vance’s original memoir gained traction in the lead-up and aftermath of Donald Trump’s election in an attempt by both liberals and conservatives to understand the rural working-class citizens in rustbelt states like Ohio, but also sparked a backlash by some who found his portrayal of Appalachian civilians to be one-dimensional and stereotypical. Whichever side you belong to, though, the book was at least interesting enough to spark some form of conversation; the movie, however, is not going to inspire such debate. It’s an empty, dull and often tedious slice of failed Oscar bait that despite its many credentials doesn’t come close to being as noteworthy as the book it’s based on.

Hillbilly Elegy is a collection of prestigious ingredients which include awards-favourite personnel like director Ron Howard and lead actors Amy Adams and Glenn Close, along with powerful subject matter, which is disappointingly wasted by a script which fails to translate J.D. Vance’s hard-hitting memoir into a compelling or even intriguing film narrative that gives us very little reason to care about anything or anyone.