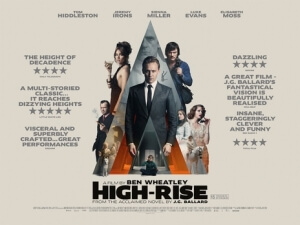 BASICALLY…: Young doctor Robert (Hiddleston) becomes attracted to a vibrant lifestyle within a high-rise complex, but also finds himself in the middle of escalating class warfare…

The works of the late author J.G. Ballard have previously been adapted by filmmakers like Steven Spielberg (Empire of the Sun) and David Cronenberg (Crash – no, not THAT one; the one about the fetishism of car crashes), but perhaps the one that Ballard fans had been most anxious over was his 1975 novel High-Rise, particularly over how any particular director would be able to make something that had been declared as “unfilmable”.

Enter Ben Wheatley, who after gaining a cult following with his previous films like Down Terrace, Kill List, Sightseers and A Field in England – as well as those couple of Doctor Who episodes he directed a couple of years ago – decided to take it upon himself to craft this as his biggest feature to date, with an all-star cast and grand production values that outshine his far lower-budgeted earlier outings.

And if you’re at all familiar with Wheatley’s particular style, you’ll know that it has the tendency to be absolutely insane – which makes him pretty much the perfect director to tackle Ballard’s most ambitious and, yes, insane novel in his entire bibliography.

Taking place in the year the novel was originally published, we follow Dr. Robert Laing (Tom Hiddleston) who moves into the 25th floor of a lucrative high-rise building designed by architect Anthony Royal (Jeremy Irons), where the more affluent residents take up the apartments on the higher levels while the less-better-off take up the ones closer to the ground floor. Needless to say, it’s not long before all-out class warfare breaks out, and that’s when things really start to go off the rails – and we mean that in both a good and not-so-good way.

In all his films thus far, Wheatley has presented twisted ideas that don’t necessarily have either a concrete plot or much of a satisfying pay-off, and High-Rise is no different. You certainly understand the crux of the situation, and especially the satirical commentary on how all inhibitions go jumping off the balcony (in one particular slow-motion sequence, all too literally) when separate worlds collide, but there isn’t much of a structure to keep it all in check, and thus it feels somewhat out of control from beginning to end. You can argue that this was an intentional decision on Wheatley’s part, after all the film is indeed about a society that slowly descends into unorderly chaos, although for a wide audience it might not necessarily translate as well, and it can leave some feeling a mixture of confused and repulsed emotions at some of the activities being displayed on-screen. In some ways, you can include this in a double-bill with The Wolf of Wall Street, another film about civilised people slowly falling prey to their own madness and greed, which would raise interesting questions about which portrait of the unhinged class system is more terrifying: the one based on a fictional book, or the one that’s based on real-life events.

Further comparisons to films like A Clockwork Orange and Brazil are all but guaranteed, as High-Rise includes themes and perspectives that are eerily reminiscent of those cult classics – for instance, you have the lust and hunger for violence amidst social paranoia of the former (not to mention at least one instance of rape, albeit without the inclusion of anyone crooning Singin’ In The Rain), and the autocratic bureaucracy and heavy reliance on mostly useless materialistic items of the latter – only if they were all blended together in a mixture that also happens to be spiked with a whole lot of LSD.

That’s basically the best way to sum up the viewing experience of High-Rise, and while it certainly does have its qualities – the direction, though unfocused at times, is entertainingly stylised and provocative; the sets are very well designed to resemble that derelict 70s concrete fashion now lost to the ages; the acting is completely fine from everyone in the cast; and if it encourages people to read the book it was based on, then that’s a further score for the legacy of J.G. Ballard as well – it’s overall just a bit of a mess.

A fascinating mess that’s hard to look away from, but still a mess nonetheless.

High-Rise is perhaps a little too chaotic for its own good, resulting in a well-made movie with some outstanding production values that ultimately suffers from a wobbly structure that doesn’t quite stop things from going out of control.