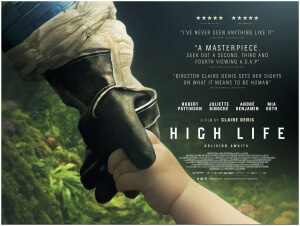 BASICALLY…: A group of criminals are drafted for an intergalactic trip towards a black hole, but unbeknownst to them they are also being subjected to some questionable experiments…

A sci-fi thriller with dazzling visual effects and an international cast that includes Robert Pattinson and Juliette Binoche? It would seem at first that French filmmaker Claire Denis has finally gone mainstream after a career of making smaller, more obscure dramas in her native language, but when you look closer at High Life you’ll realise that this is a film that spits in the face of mainstream, as it’s a project that’s entirely her creation and all the more eye-opening for it.

The basic gist of it is that a small crew of convicted criminals have been selected to head into space on an expedition to mine energy from a nearby black hole, one of them being Pattinson’s Monte. They are accompanied by Binoche’s Dr. Dibs, a mad scientist who aims to use her crew as test subjects for a very questionable reproductive experiment, but when it becomes clear that none of them are coming home after their work is done, to say that “things get out of hand” would be an understatement. That’s made even more apparent with the film’s loose wraparound segments – the movie is told in a nonlinear narrative – where Monte is the last one left on the isolated ship, looking after his baby daughter Willow.

How said baby comes into the picture is a source for many of the film’s disturbing and quite horrific visuals, none of which you’ll be prepared for in a movie that very quickly sets itself up as an extremely adult take on a popular genre. There’s violence, which isn’t that uncommon in a more sinister sci-fi flick, but it’s the kind of violence that feels a lot more raw and scientifically accurate which makes it a lot more disturbing to look at than, say, Alien – we see up close the full results of spaghettification in one scene, and there’s more than one bloodied broken nose during the crew’s alone time – and that’s only describing the physical violence.

There’s also, even more horrifyingly, an unnerving amount of sexual violence throughout, which for better or worse ties into the surprising themes of sex that Denis incorporates into the movie. Sexual tension is higher than anything on this ship, made even more so by the prisoners being forbidden from engaging in promiscuous activity which proves frustrating for some of them – except for Pattinson’s Monte, who’s voluntarily become celibate – and leads to some very uncomfortable scenes of attempted rape by some of the more hostile crew members. Beyond that, in one of the film’s most memorable sequences, we get to see “The Box” – the actual term being one that I’d prefer not repeat on here, in case someone out there is offended by strong language (yet is somehow okay with graphic descriptions of rape scenes) – which is where crew members can go and, ahem, relieve their impulses. Out of all the actors, only Binoche gets to play with it on-screen, and the actress goes completely nuts in a scene that’s borderline pornographic, and which involves restraints and metal dildoes (apparently, this device was not an original creation by the production designers; they actually found and bought a fully-functioning one to use on the set, which knowing the deep rabbit hole of sexual fantasies really doesn’t surprise me one bit). Getting back to my original point, though, sex is a recurring theme in Denis’ movie, and it leads to not only some very uncomfortable scenes of sexual violence, but also suggestive imagery that is just as disturbing from leaky breast milk to lines of semen crawling down the inner thigh of a female character. Needless to say, this isn’t one to watch with the family.

Although, I can’t imagine many people being too taken with this movie, for understandable reasons; it’s a very strange movie, an odd mixture of sci-fi and arthouse with scenes and emotions being conveyed through very little dialogue and some reasonably dry deliveries from its actors, which I can very easily see putting a lot of people off in addition to its disturbing imagery of violence both physical and sexual. However, it is also endlessly fascinating, as Denis has given her movie the gift of wonder and mystery, even in some of the film’s darker moments, with some truly gorgeous space cinematography that really makes it feel that more claustrophobic – a late shot of a gold-tinted black hole is even more special following the recent news about the first black hole to be photographed with similar colouring, which is purely coincidental with this film but is nonetheless rather special – and a lead actor in Pattinson who has never been more compelling in a role that doesn’t require a lot of dialogue in some scenes. As a side-note, I do love the career paths that he and Kristen Stewart have taken post-Twilight, with both favouring smaller and more intimate independent features where they can truly shine as legitimately great performers, and between this and The Lost City of Z Pattinson has really come into his own as someone who deserves a lot more attention and respect as an actor, despite his involvement in said franchise (though that was neither his nor Stewart’s fault; as ever, blame Stephanie Meyer for that one).

But going back to who would be most interested in this movie, I can definitely say that not everyone is going to like this; in fact, I’d go so far as to say not many people will like it – if you look at the Rotten Tomatoes score, critics like it a lot with its 83% rating, but the audience score is significantly less with 47%, indicating that there aren’t many who view it in the same light as the critics. Personally, although I found it a strange and often uncomfortable watch at times, I was still fascinated by the radical directions it was leading itself down, making for something rather original and astoundingly uncompromising.

High Life will not please everyone, especially with its disturbing imagery and bizarre nature, but it’s a fascinating and original take on human sci-fi with gorgeous visuals and a strong lead performance by Robert Pattinson.

Check out High Life showtimes in London
on Walloh.