Herself (Review #2) – A Powerful Outlet For Domestic Abuse Survivors 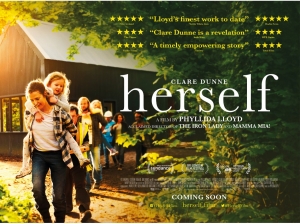 BASICALLY…: After escaping her abusive partner (Anderson), a single mother (Dunne) sets out to build a home to live in…

Even for a film that has taken a year-and-almost-three-quarters from its Sundance 2020 premiere to finally debuting in UK cinemas, it’s still rather surprising that I have now seen director Phyllida Lloyd’s Herself a grand total of three times. The first, during its run at last year’s scaled-down BFI London Film Festival (feel free to read my thoughts on it at the time by clicking here), was simply for the experience, which ended up being an inspiring and even feel-good one despite the heavy subject matter. Then, not too long ago, I was invited to attend a preview screening where, for the first time since last October, I was able to watch it with a more thoughtful and analytical gaze, trying to dig a little deeper than simply what emotions I was feeling during it.

So why has it taken an additional third viewing to finally jot my second review for this movie, when clearly my thinking cap was on for most of the previous showing? Honestly, it boils down to nerves. Not because my opinions on the film have changed – it’s still a very powerful and emotional drama that deserves an audience – but because of what it does to invoke personal trauma within myself, and surely other survivors of abuse, whether it’s physical, verbal or purely psychological. I realised, during both the second and third viewing of Herself, that underneath its crowd-pleasing exterior is a sense of truth that people who have gone through similar ordeals, no matter how severe, will undoubtedly recognise, and latch onto for some kind of support. This makes it all the more important that a film like this exists, so that it can highlight such raw and delicate situations so that we can learn from them about how best to confront some truly dark demons going forward.

For those who may have forgotten what the movie is about, we follow a Dublin woman named Sandra (Clare Dunne, also the co-writer of the film alongside Malcolm Campbell) who, after being violently beaten by her partner Gary (Ian Lloyd Anderson), is temporarily placed in a hotel with her two young daughters Emma (Ruby Rose O’Hara) and Molly (Molly McCann), while she is placed on the endless waiting list for suitable housing. Soon becoming fed up with the inconvenience of journeying three hours every morning across the city just to drop the kids off to school, not to mention trying to suppress her clear PTSD whenever she has to drop the girls off with her abusive ex, Sandra decides to take matters into her own hands and build an affordable house for herself and her kids to live in. The kindness shown to her by the likes of frail doctor and family friend Peggy (Harriet Walter), and matter-of-fact builder Aido (Conleth Hill), enables Sandra to begin construction on her dream project, but Gary’s dark shadow still looms over her well-being, especially when he legally challenges her suitability as a parent.

The film’s opening five minutes is particularly difficult to watch, because in short flashes you are forced to bear witness to some horrific domestic violence, perpetrated by a truly irredeemable monster (forget Shang-Chi’s Wenwu: Ian Lloyd Anderson’s Gary is the most despicable villain you’ll see all year) who, in proper psychopathic fashion, punches mouths and stomps on hands like they’re nothing. Survivors of domestic abuse should know all too well how much of a toll it can take one’s psyche, creating trauma that unfortunately won’t go away any time soon, and causing self-esteem to plummet so hard it begins to have a negative effect on those around them. However, what Herself captures so tenderly, through a mixture of Phyllida Lloyd’s sensitive direction (by far the strongest of her filmmaking career thus far) and both Clare Dunne’s knowledgeable script and incredibly sympathetic lead performance, is how a character like Sandra can go through the wringer like in those opening moments, but still try her damnedest to pick herself up and dust off as much filth as possible, even if it is for the sake of her impressionable young daughters.

The way that Sandra deals with the aftermath of her abuse may feel streamlined to those who have gone through more severe – but no less brutal – violence at the hands of a close one. The point, though, is not to tell every survivor’s story, but one of a particular woman who latches onto a project to provide long-term safety for herself and her children. Yet, Dunne and Malcolm Campbell’s script offers significant insight into the ongoing struggles of women who have been in the protagonist’s position, and how their mistreatment isn’t just limited to the abusive party. In the film, we see Sandra poorly treated at a secondary job at a pub, and at the airport hotel she is staying at the staff won’t even let her come through the main entrance, presumably to preserve their own image as a squeaky-clean establishment. Later courtroom scenes see her be asked unfair questions about her character, such as why she did not leave Gary any sooner, instead of asking more important questions about the abuser’s role in the relationship. That isn’t even beginning to mention the ongoing housing crisis for similarly-misplaced citizens, which here is depicted with about as much bleakness as something like I, Daniel Blake.

As for how my own personal traumas factor into my reaction to Herself, know that although I prefer to keep certain information private, I too have gone through certain things that made this film much more of a raw experience. While watching horrific domestic abuse unfold is disturbing for any empathetic viewer, it sticks out to me because I know there have been times when I’ve been at the mercy of particular rough’uns, and seeing it happen here just does something to me that somehow didn’t the first time I watched this film.

However, just beyond the misery and heartbreak, there is genuine goodness at its centre. I go more into that in my first review for Herself, but here it’s worth pointing out again to remind both you, dear reader, and myself that no matter how rough the situation, there’s always people on the other side who would help you build a house if so asked. Perhaps I’ll keep that in mind next time I consider hopping onto the property ladder.

Herself remains as powerful and emotional as it was on the first viewing, but it should be particularly moving for survivors of domestic abuse who want a film that portrays them as strong-willed fighters instead of victims.

Herself will be released in cinemas nationwide on Friday 10th September 2021 – click here to find a screening near you!