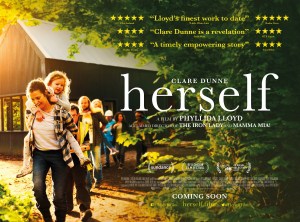 BASICALLY…: After escaping her abusive husband, a young mother (Dunne) decides to build a home for her and her daughters…

This review is of the cut shown at the BFI London Film Festival in October 2020 – the UK release date is currently unknown.

Third time’s the charm for director Phyllida Lloyd, who divided critics with her 2008 musical adaptation of Mamma Mia!, and only had Meryl Streep’s Oscar-winning turn as Margaret Thatcher to take away from the otherwise messy The Iron Lady, but only now with Herself has not only delivered her best film to date but also finally gained a striking humanity that was sorely lacking from her previous films.

Lloyd has none other than star and co-writer Clare Dunne to thank for the delicious material, who apparently came up with the story after learning of a situation her friend was in which wasn’t dissimilar to how things play out here. Later penning the script with co-writer Malcom Campbell, Dunne brought on board Lloyd – having previously collaborated with the director on a series of all-female Shakespeare stage productions – and thus a movie, like the house in this film, was built with love from the ground up. It received rave reviews upon its world premiere at this year’s Sundance Film Festival, but despite the strong word-of-mouth it has recently vacated its mid-October release due to the ongoing pandemic (a new release is yet to be determined), which is honestly kind of sad because this movie does need to be seen by a lot of people as soon as possible, as it is a truly wonderful film about the goodness of people and the will to keep moving forward despite everything.

In the film, Dunne plays Sandra, a working-class wife and mother who adores her young daughters Emma (a feisty Ruby Rose O’Hara) and Molly (a sweet Molly McCann), but after a particularly gruesome display of abuse by her husband Gary (Ian Lloyd Anderson), she escapes with her girls to a hotel for temporary shelter. From there, she has difficulty securing housing from the city council, and so she becomes inspired to build her own accommodation on land owned by her sympathetic employer Peggy (Harriet Walter), who Sandra works for as a cleaner. Working with her friends, Peggy, and local builder Aido (Conleth Hill) with his Down Syndrome son Francis (Daniel Ryan), Sandra begins construction on the house of her dreams where she and her children can live in peace.

Aside from showing a remarkable amount of restraint for the first time in her filmmaking career – gone are the stylish camera movements and haphazard editing that plagued The Iron Lady, as is the obnoxious energy that made Mamma Mia! a tad difficult to stomach (thank God the Ol Parker-directed sequel came along to set things right on that front) – Lloyd lets her gentler approach dig deep into the battered confidence of a woman who’s been physically and emotionally assaulted by someone she thought she loved, and who soon blossoms into somebody with far more courage than she gives herself credit for. Dunne’s Sandra has definitely been through the ringer, but her resolve to keep fighting for the safety and wellbeing of her children makes her far more than a mere victim, and her strong will soon inspires others to join her cause and, over time, bond as part of her own makeshift family. Both Lloyd and Dunne, the latter particularly excelling as both lead actress and co-writer, make sure to convey the character’s emotional turmoil and her growing inner strength to stand up against her bullying ex, in effective segments that represent how difficult it can be for anyone unfortunate enough to be in her position.

The film does not wallow in its misery, though, and forms an inspiring, truly feel-good story of human kindness and honest compassion from its ashes. You really are rooting for Sandra and her friends to finish the house without anything standing in their way, because their passion and comradery makes you feel at ease when you’re in their company, and when Sandra’s intentions are threatened by an increasingly volatile Gary, you feel her pain as she has to relive horrifying memories the same way a traumatised soldier experiences PTSD. You’re on her side throughout, because she is a thoroughly good person who just happens to have had something horrible happen to her, but she doesn’t let it define her as she still puts on a brave face for the sake of her vulnerable daughters, which might not be the best coping mechanism but if it’s what works for her, then who are we to tell her otherwise?

It’s a warm-hearted triumph for its director and particularly Dunne, who once again excels as the extremely sympathetic lead and as the chief creative force behind this emotional and gripping story of empowerment. One can only hope that it receives a firm new release date soon (when it’s safe enough, of course), because audiences will likely have a similar reaction to a film that deserves a lot of attention for its reaffirmation of the goodness of the human spirit.

Herself is a triumphant crowd-pleaser that earns its feel-good factor through a powerful story of personal empowerment and its highly sympathetic characters, brought to life by Phyllida Lloyd’s gentle direction and Clare Dunne’s excellent lead performance and equally strong co-written script which celebrates the natural kindness and goodwill of people which, in these divisive times, shows everyone the need to come together as one.