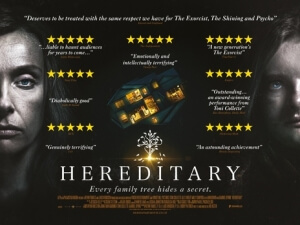 BASICALLY…: A family experiences a series of disturbing events when the elderly matriarch passes away…

I’ve got no witty opening line for this review – I’m too scared to even think of one.

Hereditary, the debut feature film by writer-director Ari Aster, is the kind of horror movie that only comes around once in a while, one that legitimately leaves you squirming with fear in your seat but also has extraordinary depth to it that not many other films are willing to dive down to. Over the years, we’ve certainly had horror films that have struck a nerve with audiences like Get Out, The Babadook and the Conjuring films, but Hereditary is a HORROR film through and through, doing everything in its power to freak you out and leave you wanting to leave the light on when you go to sleep – and succeeding every damn time it tries.

We open with an obituary for the recently-passed elderly mother of Annie Graham (Toni Collette), who is married to Steve (Gabriel Byrne) and has two children with him, teen pothead Peter (Alex Wolff) and oddball young daughter Charlie (Milly Shapiro). As Annie tries to cope with the loss of her estranged mother, who she cared for during the last few years of her life, tensions escalate between her and her family, until it reaches a point where to say that things escalate quickly would be putting it mildly. Long story short, it’s not long before the idea of a séance is introduced – but that is nowhere close to where the troubles begin.

To elaborate further would ruin the experience for you, and I recommend with all my might that you go in to this movie knowing next to nothing about it, outside of what you may have seen in the trailers. Even then, the direction you think this movie is headed based on what the promotional material suggests is not at all what you are expecting, which leads into how one of the many great things about Hereditary is its sly penchant for being wildly unpredictable. Things you don’t expect to happen will indeed occur, in ways that are as sudden as they are shocking. There are visuals that you can’t believe are being projected onto a screen for you, and are so unnerving and freakish that nothing can erase them from your memory long after you finish it. Characters will say and do things you never would think could be said and done in these contexts. All of it, every single bit of it, amounts to a horror extravaganza that will chill you to the bone, from the most disturbing of violent scenes to a shot of someone just smiling at another person, the likes of which haven’t been properly explored in horror cinema since Stanley Kubrick decided to give that Stephen King book a try.

I’m serious in saying that if this doesn’t somehow become a new horror movie classic that fits right along with The Exorcist, John Carpenter’s Halloween and, of course, The Shining, then I won’t know what to do with myself, because with only one feature film (after doing a bunch of shorts) Aster has jumped right into the big leagues with the imagination he has to scare the unholy crap out of people. He is an astonishingly strong filmmaker, injecting a sense of dread into every scene without once feeling the need to put a stock jump-scare somewhere in there (this movie is gracefully free of anything like that, as the real fright comes from the true horror on-screen), and with the aid of cinematographer Pawel Pogorzelski he creates shots and camera angles that lull you into a false sense of security but also hint at a much larger and more frightening set of circumstances to come for this family. He has also written a script that neatly ties every little thing neatly together, including the most trivial of information that comes back into play later in the film, and ensures repeat viewings so you can pick up on all the seeds planted along the way. It’s a beautifully shot, stunningly written and hauntingly directed piece of work that’s sure to make many other first-time filmmakers jealous.

Above most things, though, this is one of the best-acted movies of its kind, including pretty much everyone in its hugely talented ensemble, from veterans like Gabriel Byrne and Ann Dowd (the latter showing up as a seemingly-friendly woman also going through loss), to the bright younger actors like Alex Wolff and Milly Shapiro. By far and away, though, the main event here is a lead performance by Toni Collette that is so outstanding, so brutal and so painfully frightening at times that it may be one of the truly great horror movie performances of our time, and deserves to at the very least be in the conversation for year-end awards consideration (because if Kathy Bates can win the Best Actress Oscar for Misery, surely the horror movie bias can’t work against Collette in this instance?). It is a performance that needs to be seen to be believed, and merely writing about it I feel like I’m doing it injustice; you watch it and feel her convey so many emotions it’s hard to keep track, whether it’s pity for having lived a pretty rotten life – she goes off on a monologue early on about how her father starved himself to death, and how her schizophrenic brother committed suicide – or absolute shit-your-pants fear with some of the stuff she does much later on, which again I wouldn’t dare give away here. You just need to see it.

That, by the way, is the best way to sum up Hereditary: just see it. It doesn’t matter what you may think of the trailer, or even if horror isn’t really your thing; you need to see this movie, because not only is it one of the most brilliantly constructed horror movies of the past decade, and an absolutely frightening one at that, but it is a fantastic piece of filmmaking that deserves support in any way possible. It’s honestly going to be difficult to think of a film that’s more effective and brilliantly constructed for the rest of the year, it is THAT bloody amazing. So, once again: just go see it.

Hereditary is an utterly unmissable horror film that’s brilliantly crafted, phenomenally acted – especially by an awards-worthy Toni Collette – and wildly unpredictable, not to mention one of the scariest movies you will see in a long time.