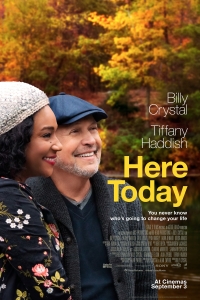 BASICALLY…: An aging comedy writer (Crystal) strikes up a friendship with a younger street singer (Haddish)…

Now that Woody Allen is pretty much out of the picture – due to all those historical allegations finally catching up to the once-revered filmmaker –that void of quirky, intellectual slices of life needs to be filled by someone. Here Today is Billy Crystal’s attempt to be that someone, with his first “written and directed by” credit in over twenty-five years (and third overall) exhibiting a lot of familiar Allen trademarks, from the New York setting to the central relationship between a neurotic older lead and a noticeably younger female co-star.

Unlike a Woody Allen film, though, Crystal’s project is a lot more treacly and sentimental, occasionally so much that it’s overbearing. However, it is undeniably effective, and made a lot more charming by a bright pairing of two very different, but entirely complementary, comedic talents.

In Here Today, Crystal plays Charlie Burnz, an aging comedy writer who’s currently working on an SNL-style sketch show with a bunch of younger writers. One day, he attends a lunch date purchased as part of a charity auction, only to find that his guest is carefree singer Emma (Tiffany Haddish) who has no idea who Charlie is, and is attending because her deceitful ex was the one who bid a whole $22 on him (“it started at $20, then it went up in 50¢ increments,” she points out). After an allergic reaction results in an emergency hospital visit, Charlie assumes he’s seen the last of his awkward date, but their paths continue to cross and, eventually, a sweet friendship begins to bloom. However, as Charlie begins displaying more and more signs of deteriorating dementia, he finds that he has little time left to solidify his connection to both Emma and his estranged adult children (Penn Badgley and Laura Benanti), as well as his memories of his late wife Carrie (played in flashback by Louisa Krause).

Crystal’s voice is dominant throughout, with each one-liner and humorous situation falling exactly within the comedian’s vaudeville stylings. Both he and Tiffany Haddish share plenty of fun quips with each other – a trip to Madame Tussauds contains non-stop jokes at the famous wax figures’ expense – while some of the more outlandish set-pieces, including aforementioned trip to the hospital and a later bat mitzvah that they attend together, are in keeping with Crystal’s natural knack for comedic timing and delivery. You can tell that most of the cast were directed to emulate his preferred droll tone, which is part of what made him such a revered comedic actor (not to mention a nine-time Academy Awards host), though it’s less effective when the film has to waltz its way down some much more emotional territory (more on that later).

The material is kept fresh by its two lead actors who work surprisingly well together, particularly given their wildly different styles of humour (Haddish is far more abrasive and spirited next to Crystal’s composed manner). If handled poorly, their mismatched pairing could very easily have led to the film feeling extremely unbalanced with its humour, but they have such sweet chemistry and are also both very likeable in their roles that the actors flow together naturally. Both the script and direction do well enough to make it seem plausible as to why these two people would end up becoming close friends (and it is strictly platonic throughout, thank goodness), and their intentionally polar-opposite performances add to the ultimate unlikeliness of their bond, but you do root for their friendship as you are charmed by their sweet scenes together.

However, the film perhaps goes a bit too sweet, especially when it gets into some of the heavier drama which, at worst, comes off as cloying and manipulative. The third act of Here Today deals heavily with the effects of dementia, but unlike The Father or Supernova which similarly tackle the subject, it’s portrayed as much more of a “movie” illness, where there’s a lot of crying and overblown moments of drama but little attempt to really dive into its true psychological impact on the person and those around them. It’s as though it becomes a completely different movie by the end, starting off as this Woody Allen-esque comedy-drama and concluding like it’s suddenly The Notebook, going full cheese and crackers with its sickly, saturated tone that noticeably contrasts almost everything that came before. Though he still manages to give a solid enough performance in front of the camera, Crystal struggles to strike the right balance behind it, coming up with some awkward filmmaking choices which don’t work as well as it perhaps does on paper, including flashbacks told entirely through POV shots that often seem like they struggled to simply find a Crystal look/soundalike.

Though it steers into pure syrupy territory towards the end, there is still a decent amount to like about Here Today. There is a lot of charm to the lead characters and their blossoming friendship, as well as two solid turns – both comedic and dramatic – that neatly compliment each other without feeling too opposite. It’s a likeable enough movie, and worth watching if you’re a fan of either Billy Crystal or Tiffany Haddish (or both), but don’t be shocked if you end up testing positive for diabetes after watching its sickly sweet conclusion.

Here Today is a mostly charming comedy from writer/director/star Billy Crystal, who shares nice chemistry with Tiffany Haddish in a script and direction that firmly implements his voice, but a sickly sweet third act and its “movie” illness portrayal of dementia come painfully close to ensuring it’s gone tomorrow.

Here Today is now showing in cinemas nationwide – click here to find a screening near you!