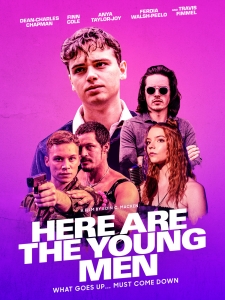 BASICALLY…: A group of Dublin teenagers engage in a summer-long vacuum of drink and drugs…

As the opening sequence unfolds of young friends parading about town, causing drink and drug-fuelled mayhem whilst Primal Scream’s early 90s banger “Loaded” plays on the soundtrack, Here Are The Young Men instantly reminds you of better movies you could be watching instead, like The World’s End or especially Trainspotting.

Writer-director Eoin Macken’s adaptation of Rob Doyle’s similarly-named novel appears to be particularly inspired by the latter, because it isn’t just a tale about youthful self-destruction with moments of excessive substance misuse, but stylistically there are zany, abstract elements which can easily be traced back to Danny Boyle’s cult classic. Because the similarities are often so hard to shake off, Here Are The Young Men comes across as more of a half-hearted attempt to appeal to the other film’s audience rather than develop its own voice, but there are some good performances and genuinely uncomfortable moments that keep it from being a complete waste of talent.

Set in 2003 Dublin, teenager Matthew (Dean-Charles Chapman) has just left school and is looking forward to a summer of partying with his friends Kearney (Finn Cole) and Rez (Ferdi Walsh-Peelo). Almost immediately, Matthew and his mates are vandalising school property, destroying the headmaster’s car, and causing a ruckus at local nightclubs, while also keeping their cool around their female friend Jen (Anya Taylor-Joy) who Matthew rather fancies. Soon, however, the three young men witness a tragic accident which ends up affecting each of them in different ways; Matthew attempts to gain responsibility by taking a job at a tyre store and formally asking out Jen, Rez spirals into a depressive state, and Kearney begins taking more and more steps towards becoming a total psychopath, having expressed devilish glee whilst watching said deadly events unfold and starting to commit his own following a brief stint in America.

I like to think of Here Are The Young Men as a long-lost Trainspotting prequel (set in Dublin, for some reason) and these main characters are Renton, Begbie and Sick Boy before they got way too much into heroin. That would also explain some of the bizarre moments of surrealism that frequently pop in and out of the movie, such as a series of imagined segments on what appears to be an American talk show with Travis Fimmel as the equally obnoxious host, which often serve as heightened and uncomfortable representations of the main characters’ psyches, particularly that of Finn Cole’s increasingly unhinged Kearney. Unfortunately, there’s no loveable Spud equivalent among the cast – unless you count Anya Taylor-Joy, who’s good in just about everything – which leaves most of the main characters hard to root for as they continue to display paranoid, self-involved and dangerous behavioural patterns; even our main protagonist, who is undoubtedly Dean-Charles Chapman’s Matthew, is guilty of being way too complicit in some of his friends’ more destructive attributes, even if it is part of his arc about realising who his true friends really are.

In addition, since a lot of the film’s style, dialogue and themes borrow so heavily from Trainspotting, that’s all you’ll be thinking about for most of this film, since there’s very little here to warrant much of its own identity. You’re not all that engaged with the vast majority of these characters, the story structure is very loose and even becomes repetitive after a short while, and while the performances themselves are perfectly solid – aside from the ever-excellent Anya Taylor-Joy, you have Finn Cole creeping it up big time as the full-blown psycho of the group, and Dean-Charles Chapman does fine in an otherwise bland lead role – none of them really stand out from each other. The only thing that really kept me invested while watching it was seeing how closely it was resembling the Danny Boyle movie, because if nothing else filmmaker Eoin Macken seems like he would be an ideal person to fill the Oscar-winner’s shoes should they ever decide to actually make a Trainspotting prequel, since he is certainly showing his influence a lot here.

Without all these call-backs to a much better movie, I would honestly struggle to talk about Here Are The Young Men for as long as I have, because there’s really not much to say about it other than it just went in one ear and out the other for me, but did so while gleefully reminding you of said better movie. It is what it is, and while it’s not an especially bad movie, it’s much more of a mediocre one, which is a little disappointing given the stellar abilities of its main cast, but at the same time what else is there to say?

Here Are The Young Men is a forgettable coming-of-age drama which struggles to shake off its blatant Trainspotting influence and thus makes it difficult for the film to find its own voice, despite some solid turns by a stellar cast of young actors who are let down by some thinly-written characters that can be hard to fully root for.

Here Are The Young Men will be available to rent or buy on digital platforms, including Amazon Prime Video, from Friday 30th April 2021.