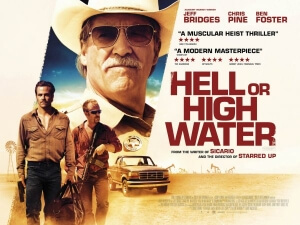 After last year’s heart-pounding thriller, and one of that year’s best, Sicario proved that he had writing skills that most other professionals would seethe over, Sons of Anarchy actor-cum-screenwriter Taylor Sheridan’s sophomore script for Hell or High Water, easily one of this year’s best, puts him high above one of the many Hollywood writers to watch, and instead positions him as one of the ones to beat.

Sheridan’s handling of dialogue, characters, story et al in this film, directed by Starred Up’s David Mackenzie, is so expertly structured and sublimely executed through powerful direction, sublime acting, and simplistically beautiful cinematography, that it’s quite hard to fathom that such a film, with its pure originality and lack of cynicism in a world of endless sequels and remakes, even exists in this day and age.

On the surface, it doesn’t seem so original – it’s the story of two brothers, a rugged divorced father (Chris Pine) and a wilder and more unpredictable ex-con (Ben Foster), who rob banks to pay off the outstanding loans on their family ranch, and are pursued by an aging Texas Ranger (Jeff Bridges) who’s about to retire – but what is so outstanding about this film is that it does something that a lot of films with this simple and rather generic plot don’t: think. This film thinks about the situation, it thinks about the impact it’s having on these characters, and it thinks about why these people are doing what they’re doing, and they all lead to intelligent conversations that are all too relevant in today’s economic backdrop. The stakes are made clear from the very first scene of the brothers’ first early morning bank robbery, which sets up perfectly the intense feeling of unease while also injecting a fair amount of humanity that makes what could have easily been just a pair of stock characters instantly relatable and real. By the time the first act is over and done with, you have good reason to side with both the outlaw brothers, and also the pair of Rangers hot on their trail (the second played by Gil Birmingham), all thanks to Sheridan’s impeccable and engrossing writing that refuses to paint things black and white.

The script may be the second winner in a row for Sheridan, but he is even luckier to have a great amount of talent working to bring it to life. Mackenzie, for instance, has been around for nearly fifteen years and in that time he’s made films that work wonders with subtlety and with giving off that uneasy vibe, such as Starred Up, Young Adam, and the increasingly underrated Perfect Sense, but with Hell or High Water, which is easily his most commercial film to date, he goes a step further. Once again, he presents scenes which seamlessly, and maybe even masterfully, include a great amount of intensity and unpredictability, but makes them entertainingly so, as opposed to just having that uncomfortable feeling all the way through. That boils down to the little things, from a one-shot scene of wannabe gangsters in a lime-green monstrosity of a car unsuccessfully intimidating our heroes, to a brief stand-off at a casino with an embittered gambler, all of which are presented with such ferocity and gripping suspense that keeps you on the edge of your seat until whatever transpires to end that scene. This is a fantastic piece of filmmaking, one that should put Mackenzie on the map as much as Sheridan, as well as cinematographer Giles Nuttgens who creates some astonishing shots of the Texan landscape that are easily some of the year’s strongest images, and should set the standard for films like this for quite some time.

Then there are the actors, who each deliver some of the strongest performances of their respective careers, and in some cases maybe even their strongest, period. Jeff Bridges has always been a popular actor, with appearances in films like Tron, The Fisher King, and of course The Big Lebowski all cementing his place in film culture, and when he finally won his overdue Oscar for his outstanding part in Crazy Heart, everyone thought that we had seen him at his peak. Not quite so, since his role here as a crotchety old Sherriff is his greatest in years, and the legendary actor brings a pure humanity to the character that makes him lovable as well as world-weary, like someone who over the years has seen some rather haunting stuff and would rather leave it all in the past, if it weren’t for a curious desire to see this one last case through to the bitter end. He shares great chemistry with Birmingham, and they share funny banter that lovingly mocks the part-Native and part-Mexican heritage his partner possesses, which almost makes you wonder if and when they’re actually going to share a kiss at any given moment. Not forgetting Pine and Foster, both of them fine actors who undoubtedly give their all into making these criminals as sympathetic and charming as you would want them to be, with Foster in particular having an absolute blast as the more unhinged one of the pair, someone who clearly gets way more of a thrill out of this activity than he probably should. Every single person in this movie is fantastic, but it’s these three leads that are driving the film to the finishing line with a true weight and grace to their actions.

This is a film that is so strong, so wonderfully written and so beautifully brought to life that it must be wondered what we must have done to deserve such a film, in light of the truly horrible things happening in our society right now. It is bound to become a new modern classic, one appreciated by audiences today and possibly in the future, and should be seen for how perfectly anyone can construct a film in this day and age without a superhero or CG effect in sight.

Hell or High Water is a fantastic film that is beautifully written by Taylor Sheridan, lovingly directed by David Mackenzie, and sublimely acted by its leading trio, including a never-better Jeff Bridges. It’s bound to be a new modern classic.