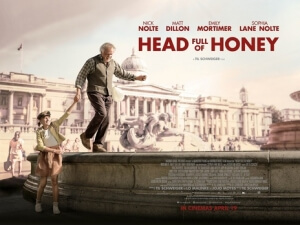 BASICALLY…: An Alzheimer’s-stricken old man (Nolte) is taken by his granddaughter (Lane Nolte) on a road trip to Venice…

Dementia is something I would never wish on anyone, not even my worst enemy. It is a heartbreaking disease that, unfortunately, most of us have seen unfold right in front of us, whether it be a family member or a close friend, and it is something that slowly gnaws at someone until they become a fraction of the person they used to be. For context, I currently have a grandmother who suffers from Alzheimer’s, and nearly ten years ago I lost my grandfather to Lewy body disease; both are forms of dementia which I have personally seen shadow over them, and I can tell you for a fact that their degrading mental state is no laughing matter, but instead is a truly testing, upsetting and extremely tough experience for them and their close ones to go through.

It is also one of the many reasons I found myself utterly appalled by Head Full of Honey, a disgusting attempt to portray it not as a serious illness but rather as an excuse for wacky comedy and light-hearted drama. This is truly tasteless, incompetent and rather offensive cinema, and does not deserve to be seen by anyone, regardless of whether or not they have previous experience with dementia.

The film is an English-language remake of the financially-successful 2014 German film of the same name, originally directed by Til Schweiger – better known as Nazi killer Hugo Stiglitz in Inglourious Basterds – who also directs and co-writes this film; both versions are about an elderly man named Amadeus (played by Nick Nolte in this one), who is brought to England to live with his son Nick (Matt Dillon, in the role that Schweiger himself occupied in the original), Nick’s wife Sarah (Emily Mortimer) and their daughter Matilda (Sophia Lane Nolte, the real daughter of this film’s lead). Amadeus causes nothing but trouble with his decreasing mental state (more on that later), until eventually Matilda decides to take her grandfather with her on a trip to Venice, with the hope of rekindling some of his past memories.

On the surface, it doesn’t seem so bad, and it sounds like a movie that has noble intentions – but the minute you see what this movie actually is, you’ll realise that you’ve gotten yourself into something so vile and gross you’ll actually feel unclean as you watch it. This is a movie that treats its main character, and the main condition that he has, less so like they’re an actual person suffering from dementia and more so like Simple Jack from Tropic Thunder (the far better Nick Nolte movie, by the way); his forgetfulness and confusion is largely played for laughs, like they’re right out of an obnoxious family comedy from the 90s like Dunston Checks In or Good Burger with pratfalls galore and slapstick straight from a Looney Tunes cartoon, and he himself is treated by other characters as some kind of wise, happy-go-lucky fool that’s just a bit quirky and entirely loveable. Except, he’s none of those things; he is rude, obnoxious, and really annoying, but the film plays the sympathy card more than once when making excuses for his bad behaviour which means you’re a horrible person if you see him for what he truly is, and entirely right if you enable his behaviour. Emily Mortimer’s character, for instance, is largely written to be someone we root against because she grows increasingly frustrated with her father-in-law’s repeated missteps such as chopping down entire bushes, setting the kitchen on fire, and causing things to break, except every time this happens we are actually on her side because, well, wouldn’t you be constantly on edge if your Alzheimer’s-ridden father-in-law was always breaking things left and right in your own home? Of course you would, but the movie thinks its audience really is that gullible to believe she’s in the wrong because she’s actually a realist.

That’s largely on her, though, as this whole family is comprised of idiots; it’s painfully clear that this old guy is suffering from dementia, right from when he gives a rambling speech at his wife’s funeral, when he’s firing loaded guns around his granddaughter (yes, that happens), talking into a banana that he thinks is a phone, and numerous other things, yet it’s only about the fifteenth time he does something like then when they start to think that maybe, just maybe, he might have a deteriorating mental condition. Furthermore, the reason why the young granddaughter wants to take her grandfather away because of the horrifying notion of him going into a home, when that absolutely should have been an option from the very start, especially when it’s made very clear that he can no longer live without some sort of assistance. So really, every insane plot turn that this movie throws at you – and this is all in the first half, too; there’s even more craziness to come in the second half – is really because of very stupid things caused by very stupid people who we don’t care about because they really are that stupid.

Its treatment of a real condition such as Alzheimer’s honestly left me feeling pretty nauseous; I could not believe I was watching a film with talented people involved that was handling this very delicate subject matter in the most irresponsible way imaginable, with zero respect for its extraordinarily real consequences and absolutely no regard for its seriousness. That’s not to say that a light-hearted film about very real topics can’t ever be done, but it has to be done in a way that is both intelligent and endearing while also at the very least competently made, all of which this film is not. I don’t know much about Schweiger as a director (he has directed several other features in the past), but here he does an absolutely terrible job; the tone is extremely bipolar and completely off the walls – a very serious argument involving two characters is very suddenly interrupted by Nick Nolte showing up to urinate in the fridge (yes, that happens) – the acting is atrocious, with actors like Nick Nolte, Matt Dillon and Emily Mortimer delivering some of their weakest roles in ages, and worst of all it contains some of the worst editing I’ve seen in a major theatrical release since King Arthur: Legend of the Sword. It is formatted so that every single scene and line of dialogue is paced with barely any room to breathe in between, which makes it sound incredibly odd as you’re hearing these conversations as though the actors snorted an entire line of cocaine before shooting, something that can only explain the utter insanity that went into the writing, directing and everything else about this film. The editing is so bad here that things will just happen with no rhyme or reason, like Nick Nolte suddenly showing up at a party wearing an old Continental Army uniform from the Revolutionary War (yes, that happens), or a later scene where Nolte and his granddaughter are driving down a one-way street in London – both of which beg the question as to why an elderly man who can’t even tell the difference anymore between a phone and a banana can not only remember how to drive but also remember what the soldiers wore during the War of Independence.

I could honestly go on for paragraph after paragraph trying to explain exactly what it is about this movie that is so fundamentally wrong, not just about Alzheimer’s but just about everything else that we as a society view as normal, but it still wouldn’t be enough. I had a hard enough time trying to make sense of the stuff I’ve already mentioned about this film, so I’d prefer to spare myself the fear of remembering everything else about it, except for the fact that this is an absolutely horrible piece of filmmaking that doesn’t deserve to be in cinemas, let alone the one I was unfortunate enough to see this one in. I can’t imagine anyone watching this film who has a close one suffering from any type of dementia and determine this to be a wholesome and appropriate handling of the subject, because as someone with previous family experience of dementia, and as some who privately wept when they could no longer remember my name, I found this to be a despicable depiction of the illness that nobody should ever be subjected to.

I find myself in a further dilemma; apparently this film received a limited release in late November last year in New York, so under standard rules this film would be ineligible for my end-of-year worst list. However, I think with this one I might have to make a rare exception; it’s THAT horrendous.

Head Full of Honey will make you wish you had dementia, if only to forget you ever saw this absolutely horrendous assault on the senses.

Check out Head Full of Honey showtimes in London
on Walloh.