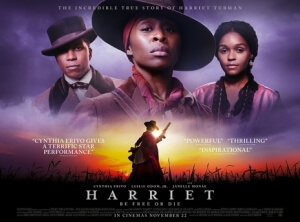 A film about Harriet Tubman, the former slave who went on to become a major abolitionist and liberator of several other slaves, is criminally overdue. She did so many things throughout her life that would make for utterly compelling cinema, but if the most famous piece of media about her until now is that Drunk History sketch with Octavia Spencer as Tubman, that means there’s something very wrong with studios’ willingness to let her story be told on the big screen (hell, just look at that recent story that’s been making waves, where a studio executive back in the 90s actually suggested that Harriet Tubman be played by Julia Roberts – “yikes” doesn’t even begin to cover it).

The fact that we now have Harriet, the first official movie biopic to be focused on the life of Tubman, feels like a course correction that should have been made years ago – but we should be glad we’re getting it now, because her story is such an inspirational and fascinating one, and the film itself does a decent job at bringing it to movie life.

We begin in the Antebellum South, where Tubman (Cynthia Erivo) – known then as “Minty” – is a slave under the cruel grasp of her master Gideon (Joe Alwyn), the son of the plantation she lives on. When she learns that she is to be sold and taken away from her family and husband, Minty makes a daring escape to the North where she is finally free, and where she chooses to be called Harriet Tubman after meeting with Philadelphia abolitionist William Still (Leslie Odom Jr.) as well as the owner of her boarding-house Marie Buchanon (Janelle Monáe). Soon, though, Harriet decides to return to the South, where she begins leading slaves away from captivity and towards the North, kickstarting her legendary activism as a slave liberator on the Underground Railroad.

That is primarily the part of her life that the movie chooses to focus on – most of her other achievements, such as acting as a spy on behalf of the Union Army during the Civil War, are delegated to mere post-movie text – but it is enough for audiences who might not know much about the historical figure and want to come away with a basic understanding of why she is so revered. The movie tells her story in a traditional biopic format, which for some wanting a film about this person to be more profound and unique might be a slight turn-off, but in this case it works because the story being told here is a fascinating one, and it is executed well enough by director and co-writer Kasi Lemmons whose passion for the project is entirely evident in her sincere and heartfelt filmmaking. At times, it also feels like a superhero origin story; we learn that, due to being struck on the head by a former master, she claims to have premonitions as sent by God about what the future lies in store for her, which Lemmons flaunts for dramatic effect and makes out to be like this other-worldly superpower whenever they come in handy. The mere notion that this biopic of Harriet Tubman takes a turn towards the supernatural is probably bonkers to anyone reading this, but it is handled in a way that never really gets that ridiculous; a little corny, certainly, but not completely insane.

As you see more and more of Tubman’s tale unfold, it’s rousing and completely engrossing, largely because Cynthia Erivo does such a fine job of portraying the woman of the hour. Erivo has the perfect face for a part like this, and by that I mean it’s so expressive that you can tell just about every emotion going across her character’s mind, and seems pre-set to perfectly convey anything she actually feels out loud; when she is sad and on the verge of tears (which she is a lot in this film), you can just about feel the lump in her throat every single time, and when she is unleashing well-earned wrath against her former owners – primarily a devilish Joe Alwyn – the fiery anger in her soul is practically steaming out of her ears and nostrils. It’s a powerful performance on nearly every level, and a great addition to Erivo’s already impressive filmography which to date has included the likes of Steve McQueen’s Widows and Bad Times at the El Royale – based on those credentials, needless to say the Stockwell-born actress is definitely doing rather well for herself.

As stated earlier, this film does not cover Tubman’s entire life, which again can leave some who have been waiting years for a Harriet Tubman biopic to be made feeling somewhat disappointed. Could they have included all of it in this film? Sure, but that doesn’t necessarily mean that they should, because then it would risk falling into the trap that so many biopics tend to do, specifically including so much material that it probably would have better served as a TV miniseries than a feature-length movie. Harriet doesn’t do that, as it keeps things relatively focused on just her most infamous exploits, which for an audience member who might not even know who Harriet Tubman was is pretty much all they need, and makes it work as well as it can within the limited movie format.

It might not be the definitive Harriet Tubman biopic, but until more studios decide to give her complete story the time of day (and NOT cast Julia Roberts in the main role, because why the hell would they in this day and age?!) it will have to do.

Harriet tells the long-overdue story of famed abolitionist Harriet Tubman in a traditional narrative format, which for some seeking a definitive biopic might be a bit of a disappointment, but it is kept afloat by passionate filmmaking by Kasi Lemmons and a powerful lead performance by Cynthia Erivo.

Want to decide what the movie’s like for yourself?
Check out Harriet showtimes in London
via