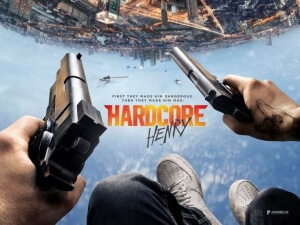 BASICALLY…: The viewer is placed in the shoes of Henry, a man brought back to life who must rescue his wife Estelle (Bennett) from an evil crime boss (Kozlovsky) while also learning the truth of his own identity…

A friendly word of advice for anyone wanting to consume any kind of snack or drink while watching Hardcore Henry in the cinema: DON’T.

We’re not even joking: the motion sickness you will experience while watching this first-person action film, marketed as one of the first of its kind to be shot almost entirely that way, will be enough to make you feel queasy within the first half hour, and we guarantee you will feel a whole lot worse with a full stomach (this reviewer found that out the hard way with the melon packages they ate during this, and we’ll just leave it at that). It’s bad enough that the camera is shaking every which way to replicate the movement of running or fighting, but the fact that it rarely takes a break to allow anyone a chance to rest their eye sockets and be in a state of calm for longer than five or ten seconds means that we are constantly on the move, and you know what they say about running right after eating. So, for the health of yourself and those around you, please do not even think about getting some popcorn or nachos or whatever as you go into this film.

However, even if you were wise enough to avoid eating before this film, you will still be feeling somewhat repulsed by not only the constant camera movement that would make anyone with a weak stomach feel nauseous, but also by the unpleasant and even grotesque uber-violence that’s so over-the-top and insane that not even Queen songs can bring it back to what it considers reality.

The best way to actually sum up the film is to try and explain the plot: the viewer is Henry, a guy brought back to life with a robotic arm and leg by a woman (Haley Bennett) claiming to be his wife. Before you can say “what the hell is going on?!”, an albino Russian mastermind (Danila Kozlovsky) with telekinetic powers wants Henry as a prototype for his own army of super-soldiers in a world-domination plot that’s as complicated as it is nonsensical, and when he’s dropped into the middle of a Russian city he must run from and kill the bad guys with the help of multiple British-accented characters all played by Sharlto Copley, including – among many others – a homeless man, an army colonel, a punk rocker, a cocaine-addled swinger, and a lounge singer that croons “I’ve Got You Under My Skin”.

Were you able to follow all of that? We hope so, because all that stuff genuinely happens in this movie. It is absolutely insane, but not the kind where it’s enjoyable to watch and more like you keep wondering what kind of asylum they broke out of to put this film together. That extends also to the high levels of violence, which when amplified by the POV shooting style that places us right in the middle of it all gives off some uncomfortably sadistic vibes when we are forced to watch what are meant to be our own hands shoot, stab, smash, dismember, behead and murder countless goons as well as anyone else who happens to get in the way. It’s like watching someone play one of the most violent first-person shooter video games ever created, but feeling increasingly disturbed by the psychotic tendencies it may be placing on the player.

On top of everything, however, you find quickly that you just don’t care about anything. While this is certainly not the kind of film that puts story or character first, any film no matter what needs something for the audience to latch itself on to, whether it be a mission worth fulfilling or someone to form an emotional connection with so that we’re with them every step of the way, and this film doesn’t have any of that. The POV gimmick doesn’t count, because although the stunt work and camera operation by director Ilya Naishuller and several others wearing that GoPro device is ambitious and technically impressive, it gets old after a short while and it just becomes tiresome by the time the big climax gets underway, at which point you’re just praying for the experience to end instead of continue.

It will certainly have its fans, probably of audience members with stronger stomachs and eye coordination, but Hardcore Henry is ultimately a failed experiment to try and raise the action genre to a new level. Sorry, movie; Mad Max: Fury Road got here before you.

Hardcore Henry is a failed experiment in POV action cinema, with the constantly-moving camera work making it just as nauseating a viewing experience as its unpleasant levels of violence and insanity that will easily put off any audience member with a weak stomach.