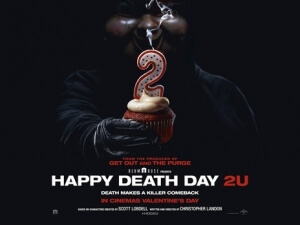 BASICALLY…: Tree (Rothe) unexpectedly re-enters the time loop she thought she had escaped, and must find a way to break free from it – as well as from being killed over and over again – once and for all…

The first Happy Death Day film, which took the concept of Groundhog Day and applied it to a slasher movie, was a pleasant surprise; it was fun, didn’t take its plot too seriously, was more often than not very funny, and featured a very likeable lead performance in Jessica Rothe. It also took most critics and audiences by surprise, as the film became something of a sleeper hit (though given that it was a Blumhouse movie, it was always going to make back its less-than-$5-million budget in its opening weekend alone) and left fans more than curious, especially when they announced that a sequel was being made.

Like the previous film, there was trepidation towards this one; after all, a sequel to a movie where everything loops over and over again is an extremely difficult task (but not an impossible one) as there’s a high risk of it feeling completely unnecessary or extremely redundant, and with it being a follow-up to a reasonably well-liked horror movie there was also the very large probability of it not living up to expectations.

The answer that writer-director Christopher Landon seems to have come up with is both insane and also kind of genius; while Happy Death Day was more of a slasher horror-comedy, Happy Death Day 2U is very much a sci-fi comedy with slasher horror elements – it’s very much the Back to the Future Part 2 of slasher flicks, and that has never been more of an amazing concept to behold.

The film follows on from the end of the previous film, when college student Tree (a returning Jessica Rothe) has escaped her time loop and his shacking up with her new lover Carter (Israel Broussard). However, when Carter’s roommate Ryan (Phi Vu) begins experiencing his own time loop, Tree discovers that the loops are being caused by an experimental quantum reactor that Ryan and his friends have been working on in the technology department. After an altercation with the machine, Tree suddenly finds herself back in her old loop – but things are different, such as Carter now being romantically involved with Tree’s sorority sister Danielle (Rachel Matthews), her mother (who is dead in the original timeline) is alive, but most significantly the masked slasher who made her life a living hell over and over again in the previous loop is a completely different person than it was before. As Tree continues to find new and interesting ways to die over and over so she can help her friends fix the quantum machine and send her back, she is faced with a series of personal challenges that hurt nearly as much as her several deaths.

On paper, it probably sounds incredibly ridiculous – and yeah, it is. However, that kind of over-the-top and self-aware ridiculousness is absolutely perfect for a sequel to a film that never took itself so seriously in the first place; here, the comedy aspect is played up a lot more, with the slasher movie element honestly reduced to an afterthought for most of it (there are times when you even forget that there’s a masked killer on the loose) and the focus lies a lot more on this main character and the new timeline that she’s unwittingly found herself in. By adding the sci-fi element of this quantum reactor machine, the movie also gives itself plenty more opportunities to get creative with the original idea, from the numerous deaths that Tree has to endure – one of them sees her down an entire bottle of bleach, and another sees her jump out of a plane with no parachute and barely any clothes – to opening up the idea of a multiverse where several similar timelines exist (and yet, all of them seem to have a killer with a baby mask lurking about). It’s incredibly fun stuff, and you’re laughing along with the film that is mercifully aware of how silly it all is but is also genuinely funny in how it executes a lot of its insane ideas.

Keeping it all together is Jessica Rothe, who between the first film and this one is an absolute treasure to behold on-screen, with the talent, charm and charisma of a proper movie star which makes it somewhat baffling that she’s not been offered more roles in things. Rothe easily carries this movie with a true sense of showmanship, getting laughs in all the right places as well as really selling some very dramatic scenes whenever she’s with her mother in this universe, in gut-wrenching moments that really play to her strengths as a dramatic actress about as much as the funnier scenes play well to her comedic chops. She is so good in this film, and she shares great chemistry with most of her co-stars including Israel Broussard and Phi Vu who gets a lot more to do in this film, that I genuinely wish that she was in a lot more movies so she can show the world she can do more than just be really charming in horror-comedies like this.

It’s a fun experience, as you’re completely on-board with everything this movie throws at you, whether it’s the sci-fi stuff or the multiple death scenes of our main character, and you’re enjoying this central performance so much that you don’t really want this looping ride to stop. Like the first film, this was also a pleasant surprise in that it’s a sequel to a horror-comedy that does a lot more outlandish things and threatens to go too far over-the-top, but it’s kept entertaining enough and you’re completely on board with these characters that you don’t mind any of the craziness, making it a pair of films you’ll want to experience over and over again.

Happy Death Day 2U is a very entertaining sequel to the hit horror-comedy, and while this one plays up the comedy more than the horror, you’re still on board thanks to its gleeful self-awareness and the incredibly charming lead performance by Jessica Rothe.