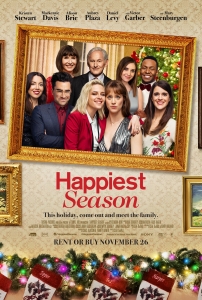 BASICALLY…: Whilst visiting her girlfriend’s (Davis) home for Christmas, Abby (Stewart) learns that her partner has yet to come out to her conservative family…

Being “home for the holidays” rings truer than ever in 2020, because despite rules being relaxed so that more people can meet up over Christmas – though I implore each and every one of you to still be careful about who you meet with – we’re going to be spending a lot of time at home as COVID-19 continues to rage during the winter months.

Luckily, there’ll be plenty of film offerings to pop up on demand this Christmas if you’re still unwilling to head to whichever cinemas may be open, and one of them is Happiest Season, which has just about everything you could hope for in a solid festive classic, from tree mishaps to awkward family unions to a soundtrack of popular holiday music. The twist, though, is that it offers a much more unique point of view that packs an emotional, and ultimately uplifting, punch.

In the film, we are introduced to Abby (Kristen Stewart) and Harper (Mackenzie Davis), a lesbian couple who have been romantically involved for a good while, but long enough for Abby to consider proposing. They travel together to spend Christmas with Harper’s family, but Abby soon learns that Harper – who is afraid of what her perfectionist parents will think, especially when her father (Victor Garber) is flouting a mayoral run – still hasn’t come out to them, and that they need to pretend to just be friends for the time being. When Abby finally does meet Harper’s family, it’s not hard to understand the dilemma; they’re a very uptight clan, snobbish and condescending whilst treating the only compassionate daughter Jane (Mary Holland, who also co-wrote the script) like she’s utterly worthless. The others, from Mary Steenburgen’s Instagram-savvy mother to Alison Brie’s steely-eyed overachiever, seem very much like the worst people you could spend any holiday with, and for Abby it becomes harder to keep the secret when she sees that Harper is all too willing to go along with the charade.

It probably sounds trite and somewhat insufferable to sit through, like a lot of ensemble Christmas family movies of the past few years like Christmas with the Coopers, but director and co-writer Clea DuVall steers clear of falling into particular conventions by giving her script a jolt of wit and warmth, with fun characters you can enjoy spending time with. Kristen Stewart and Mackenzie Davis are a great couple with plenty of sweet chemistry and charm to spare, while everyone else from Dan Levy hilariously filling the “gay best friend” role in a film where the main characters are also gay, to the creepy twin children who act like they’ve just come back from haunting the hallways of the Overlook Hotel, also get great moments to shine. DuVall and Holland’s script gives the actors plenty of funny material to work from, and they perform it with plenty of energy and a strong sense of comedic timing.

The odd thing about this movie, when you really break it down, is how conventional its plot is. It’s not that hard to figure out what direction certain things are going in, with some moments of slapstick being telegraphed early on, and some obvious symbolism such as a character literally hiding in a closet. There’s even an awkward run-in with an ex – two of them in fact, with not just a guy that Harper once went out with, but also Aubrey Plaza as an old flame of hers who got thrown under the bus to protect her own sexual identity – that goes about as well as you might imagine. The thing is, though, that DuVall and Holland have written it in such a way that these developments, as corny as they may seem, are treated like very human occurrences and not blown out of proportion by forced slapstick or contrived dialogue. They make it feel so real, as do the actors who are also in on the good vibes the movie is clearly sending, and they come together to make a genuinely warm and charming Christmas movie, regardless of what the sexual orientation of its two leads are.

It’s a film that’s got lots of comedy, romance, drama and, of course, festive cheer to keep itself going, and it’ll likely become a new seasonal favourite with audiences since it has a lot of the right stuff people usually think about with Christmas, from tinsel to sweet romance. As conventional as the plot may be, it doesn’t distract from its big heart and good intentions, nor from the fact that Kristen Stewart is alarmingly comfortable in the unfamiliar realm of the festive romantic-comedy, which further extends her abilities as an actress to stand out in just about any film genre. She’s great, as always, and the film she’s in just happens to be pretty decent as well – a perfect stay-at-home movie while you’re home for the holidays.

Happiest Season is a fun and charming festive romantic-comedy that makes a heartfelt and funny movie out of its rather conventional plot, with a queer twist that adds to its compassionate nature, as well as a strong and witty script that humanises its characters and treats the scenario with decency and respect.