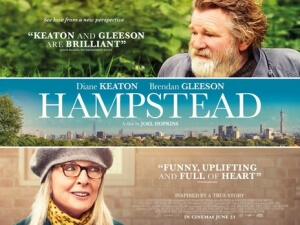 BASICALLY…: An American widow (Keaton) finds an unexpected romance with a man (Gleeson) who’s living wild in Hampstead Heath when they take on the developers who want to destroy his home…

From the very first shot, of a blue sky and a kite drifting innocently in the wind, you know exactly what kind of film you’re getting yourself into when you watch Hampstead, a fluffy, simple-minded and offensively inoffensive British comedy for a slightly older and, let’s face it, more affluent demographic.

The sickly sweetness doesn’t let up from there onwards, as we get to meet middle-aged American widow Emily (Diane Keaton) who lives a decent existence in a nice flat within a gorgeous complex opposite Hampstead Heath, whose late husband was apparently loaded to the point where she doesn’t even need to get a paid job and instead volunteers at the local charity shop, and spends her free time with her much more snobbish and uptight lady friends who want to push for agendas like limiting mobile phone data coverage. So far, it’s obviously not easy for us to sympathise with this woman, even when she’s complaining about living in such nice conditions because she doesn’t feel like she belongs there or some BS like that. But her first-world problems don’t end there, as she comes across eccentric hermit Donald (Brendan Gleeson) who is living in a handmade shack on the Heath, and who is being threatened with eviction from the property developers who want to build luxury apartments on his land, so she takes it upon herself to help him fight them in the courts, and maybe, just maybe, find a bit of love in this ragged man who lives wild on Hampstead Heath.

And all the while, you are begging for someone in this film to just tell this woman to count her blessings, because money problems aside (she is noted to have a slight spending problem), she still lives in one of the nicest places in North London, gets to wander around the overpriced high street on her way to work, and has it way better than if she was stuck in any other part of town. Seriously, Hampstead as depicted in this film makes Notting Hill from the movie Notting Hill look like the grimy backdrop from a Noel Clarke film; everyone’s smiling and friendly, people are handing out charity flyers every left and right, people talk so proper you’d easily mistake them for royalty, it’s that safe and well-off, so no matter how hard this movie tries to get us to sympathise with this woman’s problems, it fails spectacularly because she’s so well-off that you really don’t care if she’s upset about it. You especially don’t care when the inevitable third-act breakup of this rom-com comes about, because it’s spurred by a pretty selfish decision on her part that makes everything leading up to that almost pointless, but nope, everything must bend to her will because, y’know, love. Keaton acts like she doesn’t even want to be associated with this nauseating tripe, let alone a character so unsympathetic you wonder why you’re even supposed to be watching or even rooting for her.

Gleeson, at the very least, acts like he’s actually into it, even the unbelievable romance that the script dictates them to carry out which follows all the typical beats a standard on-screen rom-com usually hits from the awkward meet-cute to the aforementioned third-act breakup and reunion. It plays out like one of those trashy romance novels that’s written exclusively for rich white women, particularly the ones about a man from a much lower income or class sweeping a more affluent woman off her feet, but it’s under the pretence that it’s actually a Richard Curtis-style romantic-comedy instead of entirely disposable genre trash, which makes it a bit more insufferable when it’s trying to be cutesy and condescendingly light-hearted, especially when you know what it was originally setting out to do. Gleeson’s character is based on the real-life figure Harry Hallowes, nicknamed “Harry the Hermit”, who actually did live on the Heath and successfully claimed squatter’s rights after being there for over twelve years, before passing away in February 2016; with that in mind, you can get a glimpse of what the filmmakers were attempting here, but then somewhere along the script-writing process, someone decided to turn it into a disgustingly twee romantic-comedy that Richard Curtis would pass through his morning bowel movement, thereby softening the blow to what could have been a revealing look at the current housing problems this country is facing. Like a lot of other  films based on a person’s life that end up being rubbish, Hallowes deserves a much better portrayal in the media, not least because the character’s name has been changed to Donald just so they can give him the nickname “Donald Tramp”.

As far as these nauseating light-hearted comedies for the older generation go, this wasn’t as excruciatingly painful to sit through as The Time Of Their Lives (at least this film doesn’t have Franco Nero’s penis right in full view of the camera), but it is still a pretty rubbish film to get through. It’s a much more mainstream attempt at pandering to its demographic, but it’s pandering nonetheless, and this film is so safe and without any bite to it, not to mention characters you don’t care about because of their extremely well-off privileges, that you’re just praying for someone to drop by just to drop an F-bomb or blow something up, because then at least there would be something worth watching in this version of Hampstead.

Hampstead is an offensively inoffensive romantic-comedy designed exclusively for the older generation, but even they will feel pandered by its overly safe nature and unbelievable romance, with characters that you just don’t care about and are so well-off and so privileged that you wonder why the filmmakers want us to actually be invested in their plight which is just comprised of a bunch of nauseating first-world problems.