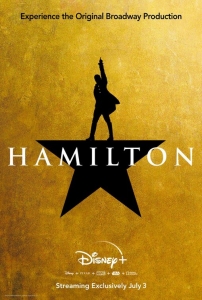 BASICALLY…: The story of Alexander Hamilton (Miranda), a Founding Father of the United States and the first Secretary of the Treasury…

I’ll admit, it’s a little strange reviewing a stage production on this film website, because by and large film and theatre are very different entities: theatre relies a lot more on the written word to tell a story, whereas with film you get extra tools such as cinematography, editing and visual effects to support your vision. However, given that this is Hamilton we are taking a look at today, I think that’s enough to convince anyone of its position amongst more traditional movie fare.

At the risk of sounding like I’m understating things, Lin-Manuel Miranda’s musical re-enactment of the life of US Founding Father Alexander Hamilton has taken the world by storm, selling out theatre after theatre around the world with tickets costing about as much as an arm and leg in some areas, and inspiring a whole new generation of theatre fanatics and history geeks with its slick educational prowess and some incredibly memorable tunes. A movie adaptation, in the same vein as Les Misérables or The Phantom of the Opera, seemed inevitable, until it was announced that Disney had secured the rights to just put a pre-recorded version of the stage production in cinemas instead, before moving straight to Disney+ due to the COVID-19 pandemic.

As fascinating as it would have been to see how something like Hamilton would have looked if it was made into a proper movie, the stage experience is something that cannot be replaced, and as you might have expected this is a great way to experience a truly fantastic musical without spending hundreds on a single solitary ticket.

The version we see here was recorded in June 2016, with the original Broadway cast assuming their roles before moving on to other things, so not only do we get to see Lin-Manuel Miranda himself play the title role that he became famous for playing, but we also witness other actors like Leslie Odom Jr., Daveed Diggs, Anthony Ramos and Renée Elise Goldsberry among others in their own roles which led to them each having their own career paths afterward. The plot, if you needed to know, follows Miranda’s Alexander Hamilton as he emigrates from the Caribbean to America in 1776, where he becomes the right-hand man of George Washington (Christopher Jackson) during the American Revolution, and is later appointed as the first Secretary of the Treasury. The story also covers Hamilton’s relationship with his wife Eliza (Phillipa Soo), and his rocky friendship with Aaron Burr (Odom Jr.) who would ultimately be the one to kill Hamilton in a duel (and that’s not a spoiler, because a) history, and b) Burr himself reveals that during the first number of the show).

You’re not going to find any controversial opinions in this review, because like the rest of the world I found Hamilton to be an absolutely exhilarating piece of art from start to finish; the songs are masterful, the performances are passionate, and the staging and choreography are simple dazzling, there’s not a misstep anywhere to be found. Miranda’s lyrics are rhyme-spitting genius, with some of the most intricate and carefully constructed wordplay I’ve heard in any form of media, and the production constantly puts it to great use in scenes that successfully combine this very post-modern style of music with 18th century ideals and practises (in a couple of inspired scenes, political debates are delivered like a rap battle) without once feeling like it’s obnoxiously out of place. They also help tell the fascinating story of this real-life figure that not many people had even heard of before this production ascended into popularity, and it tells this tale with audacity, ferocity, humour, and even a little bit of heartbreak, all of it delivered with the fiery passion of a thousand suns by some truly outstanding performances by Miranda, Odom Jr., Diggs, Soo, Ramos, Goldsberry and the rest of a damn fine ensemble. So yeah, this is just another glowing review for Hamilton, but in my defence, it’s Hamilton.

The real question, though, is how it looks on the screen. The answer, surprisingly, is rather well; it is shot not unlike how they sometimes broadcast plays into cinemas, complete with audience reactions including the wild applause at the end of each major musical number, but the camera manages to let us get close to the action and absorb both the music and drama through some tight editing and dazzling stage-lit cinematography. Of course, nothing can truly beat the feeling of actually being there, but for anyone who’s always wanted to see it and couldn’t because ticket prices were too high or it just wasn’t available, this is the best chance you have of taking in all its glory without spending a fortune on a seat that might not even give you the best view of the stage. As for anyone who has seen the stage show before and wants to relive that experience, this is a great source for them to go through and analyse even further why they adore it so much (at the time of writing this, I’ve already seen at least two YouTube videos on my homepage about the hidden Easter eggs inside of Hamilton, which just goes to show that the most hardcore fans will examine and nit-pick a product to no end).

What else can I say about Hamilton that everyone on the planet has already said? It’s a fantastic musical, and it’s well worth watching in the safety of your own home, because with theatres not due to open until next year at the earliest, it might well be the best chance you have all year of experiencing true theatre.

Hamilton is a fantastic musical with some truly excellent songs, performances and writing, all of it captured exceptionally well from a 2016 performance that features the original Broadway cast, providing viewers a chance to experience its most famous iteration from the safety of their own homes.

Want to decide what the movie’s like for yourself?
Check out Hamilton streaming links
via