Halloween Kills (Review) – Michael Myers Is Deadlier Than Ever 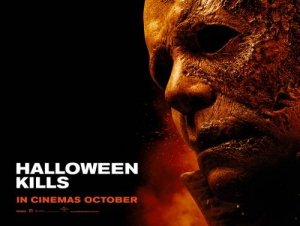 BASICALLY…: Michael Myers (Courtney/Castle) continues his killing spree in the town of Haddonfield…

Can anything kill Michael Myers? Over the years, he’s been shot, stabbed, set on fire, beheaded (sort of), and forced to participate in a reality TV show: all things that should unquestionably kill a person, and yet he has survived each and every time. It seems that there is indeed some truth to that quote from John Carpenter’s Halloween, the 1978 classic that started it all: “Everyone’s entitled to one good scare”, in this case being the fact that Michael Myers keeps coming back, with each instance deadlier and more dangerous than the last.

That’s definitely the case in Halloween Kills, where Michael Myers is at his most unstoppable in a film where he possibly delivers the highest body count this series has yet seen, and in some of the most gruesome ways as well. This should be enough to satisfy anyone who goes to a Halloween film just to see Myers wreak havoc on the town of Haddonfield, but in terms of furthering any themes, characters, ideas or showdowns, some may understandably find this to be a letdown.

Beginning mere moments after the end of the 2018 Halloween entry – which ignores all other sequels, and serves as a direct follow-up to the 1978 original – where we saw former Myers victim Laurie Strode (Jamie Lee Curtis) trap the escaped killer in her burning home, it seems like Laurie has finally gotten revenge on the masked man who terrorised her 40 years prior. However, Myers ends up escaping his fiery grave and immediately proceeds to murder anyone and everyone unfortunate enough to cross his path – which, as it turns out, is quite a lot of people. While Laurie recovers in a hospital, the citizens of Haddonfield – led by an adult Tommy Doyle (Anthony Michael Hall), who was being babysat by Laurie that fateful night in 1978 – form a vigilante mob to track down and kill Michael Myers once and for all, which of course may be easier said than done.

Halloween Kills is essentially a bridge movie, the serviceable middle chapter in a story that has its own start, midway point and finish (the yet-to-be-filmed latter, Halloween Ends, is currently due for release next October). As such, it doesn’t have a firm beginning and end – that’s what the other two bookending movies are for – so it dedicates nearly all of its running time to pure, unadulterated carnage. From the very start, Michael Myers is brutally offing people left and right, with no regards as to how old, what gender or which walk of life they may identify as, and it is obscenely gory to watch; director David Gordon Green, having established a pacing in the previous Halloween film that was much closer to John Carpenter’s all those years ago, here breaks it all down to a tougher, nastier and exceptionally more bloody rampage, which could understandably leave some viewers frustrated by the stark contrast between both movies. However, the kills here are very good, with some strong gore effects brought in to make a scene even bloodier than it already may be, and more often than not they are sadistically enjoyable to watch.

It is also a Halloween movie that likes to remind viewers that it is a Halloween movie, with constant flashbacks to the 1978 classic (and even the 2018 one that Halloween Kills is a direct sequel to), setting its prologue on the same night the original murders took place, and even bringing back a whole slew of characters that fans will recognise. Aside from Tommy Doyle (here played by an intimidating Anthony Michael Hall, replacing original actor Brian Andrews), fans will be somewhat thrilled to see the likes of Kyle Richards as Lindsey Wallace – the other child being babysat in the 1978 original – and Nancy Stephens as nurse Marion Chambers making their return, with even the addition of stunningly close lookalike for the late Donald Pleasance as Dr. Loomis (here played by the film’s art director Tom Jones Jr., with a Pleasance soundalike providing the voice); some of these returning faces prove useful, but others are clearly just there for fan service, and to awkwardly deliver lines which forcibly call back to John Carpenter’s Halloween. Because it is always using every available opportunity to remind the audience about the past movies it is following on from, Halloween Kills doesn’t have much room to also be a genuinely strong movie in its own right, getting lost in its far too many characters and borderline self-indulgence to really leave an impact aside from the entertainingly gory death scenes.

There are other interesting elements to the film, such as the notion that Michael Myers is causing so much mayhem that a vigilante mob born out of the desire to get rid of him once and for all ends up becoming perhaps just as dangerous as the man they’re looking for; a chase scene involving another escaped mental patient sees people get stomped over, savagely pushed to the side, and assaulted further just to get to someone who doesn’t even have the same build as Michael Myers. It’s always great seeing Jamie Lee Curtis in these movies, although here – not unlike how she was in the now-discarded 1981 sequel Halloween 2 – she is incapacitated in a hospital for most of it, meaning that those expecting yet another showdown between her Laurie and Michael will sadly have to wait until the next one. Nevertheless, there are things that happen here which do set up for a pretty full-on final confrontation, so hopefully Halloween Ends will be able to deliver what Halloween Kills doesn’t entirely succeed at doing.

It will probably leave most horror fans split; there will be those who shall be satisfied purely by the insane amount of gore and deaths in the movie, perhaps the most yet in any Halloween movie, and there will be people who see it as mostly pointless excess before next year’s decisive finale. Either way, Halloween Kills certainly ups the ante, and gives enough people what they’re entitled to around this time of year: one good scare.

Halloween Kills is a relentlessly gory new addition to the slasher franchise, featuring some entertaining and over-the-top death scenes which rank among the most brutal of the entire series, but it often gets lost in constant self-referencing and a messy focus on far too many characters to really stand on its own as a truly compelling entry.

Halloween Kills is now showing in cinemas nationwide – click here to find a screening near you!