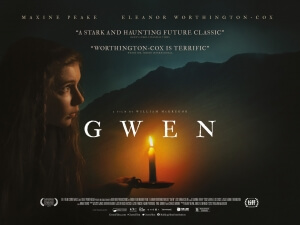 BASICALLY…: In 19th century Wales, young Gwen (Cox) struggles to hold her fragile family together as a growing darkness begins to take hold…

Gothic storytelling resonates well with people because it dares to go places where other period-set stories wouldn’t even consider, even if the overall outcome is exceptionally bleak for most if not all of the main characters. It is a style of fiction that writer-director William McGregor, here making his feature debut after a collection of short films, seems incredibly enamoured with and has worn his influences on his sleeve in the making of Gwen, a dark and moody piece that’s unnerving, unsettling, and sometimes even horrific, but contains all the hallmarks of an exceptionally strong first feature that should bode well for the filmmaker’s future career.

Set in the gloomy landscapes of Snowdonia in the midst of the Industrial Revolution, the focus is on young Gwen (Eleanor Worthington-Cox) who lives with her mother Elen (Maxine Peake) and younger sister Mari (Jodie Innes) on a secluded farm in the hills, waiting for their father (Dyfrig Evans) to return home from war. Gwen is forced to grow up fast, however, when her mother’s physical and mental health begins to decline after she starts having seizures, but even more so when it appears that someone is terrorising her and her family to no end, which might have something to do with the local mining company wanting the family’s land.

At first, though, it doesn’t seem like the threat is entirely mortal; the film takes heavy cues from gothic folk horror, particularly those of a supernatural flavour, as the bleak cinematography suggests an unearthly presence is lurking about somewhere in the fog-blanketed distance, even in scenes set in broad daylight. It sets itself an uneasy mood from very early on, slowly building up feelings of dread and anguish, and once it becomes clear who is to blame for some of the disturbing events inflicted upon this struggling family – among them is coming home to find a heart nailed to their front door, and later on a horrific slaughter that will give any farmer nightmares for weeks – it reaches a crescendo of uneasy viewing, even if you’re never entirely convinced of how things escalated to that point in the first place. McGregor might be making his feature film debut here, but the ways in which he conveys emotions and subtle storytelling through that building sense of unease, not to mention some pretty intense visuals and sequences – there’s one jump-scare scene that’s right out of a modern-day horror film – makes him feel like he’s been doing this whole filmmaking business for a while now (which, technically, he has; you can find some of his short films on YouTube, and he’s also been involved with TV productions such as Poldark, Misfits and the upcoming adaptation of His Dark Materials).

While the film is absolutely stunning in its gothic bleakness, from the atmospheric imagery to the slowly escalating feelings of dread and anguish, it is even more so as a starring vehicle for young Eleanor Worthington-Cox. At 18, she is already a seasoned veteran following an award-winning turn as Matilda in the popular West End version of Roald Dahl’s book and her BAFTA-nominated performance in TV miniseries The Enfield Haunting, not to mention previously appearing opposite the likes of Angelina Jolie and Johnny Knoxville in Maleficent and Action Point respectively, but as Gwen in the aptly-named Gwen, she makes a very strong case for a long and prosperous acting career. She conveys so much emotion, from frustration to grief to downright fear, through her expressive eyes which largely fill you in on every necessary detail without the need for dialogue, and as you see her witness one unnerving event after another you really feel this girl’s anguish and heartbreak, because the actress does such great work here that she makes this character feel real and truly sympathetic. She’s also benefiting from sharing the screen with Maxine Peake, another great actress who does highly commendable work here, as the two of them deliver very different performances – Peake perhaps has the more physically demanding role of the pair due to the numerous amount of on-screen seizures she endures, while Worthington-Cox undoubtedly has the part that’s more emotionally straining – but they complement each other through their subtle afflictions which both use to dive deeper into their characters’ very polarising approaches to unconditional love. Peake is great as always, but this is Eleanor Worthington-Cox’s moment in the spotlight, and she more than delivers.

It’s an effective, understated and most certainly gothic folk tale that McGregor is telling here, and he does so in the true spirit of gothic fiction by indulging in some of the bleak and miserable visuals which inspire dread and fear in truly exciting ways. There are times, though, when the quiet build-up it had been attempting throughout most of it threatens to be undone, particularly by a slasher movie climax that comes almost out of nowhere, and an overall resolution that leaves a bitterly harsh taste in the mouth, even if that was what it was aiming for in the first place. They are mere teething problems from a first-time feature filmmaker, though, and none of it sways any confidence that both McGregor and his outstanding young lead are on their way to stronger, more prosperous projects in the future.

Get familiar with those names now, as you are likely to hear them a lot more in the coming years, and you’ll look back on Gwen as the place where it pretty much started for them.

Gwen is a chilling gothic drama that makes a strong case for first-time feature filmmaker William McGregor, who sets his film to some bleak and moody imagery of the Snowdonia landscapes as well as slowly escalating feelings of dread and despair, and lead actress Eleanor Worthington-Cox, in a stunning breakout lead performance, to add a whole lot more films to their credit in the future.

Check out Gwen showtimes in London
on Walloh.