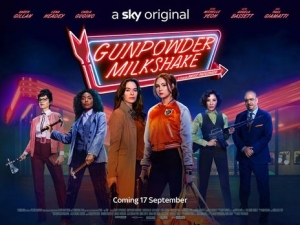 BASICALLY…: When a professional assassin (Gillan) runs afoul of the firm she works for, she is put back in contact with her estranged assassin mother (Headey)…

Gunpowder Milkshake – now making its UK simultaneous theatrical and streaming debut – is the second female-led assassin movie I’ve seen in a week, after Netflix’s Kate. Both certainly stick to a tried-and-tested formula, so much so that they threaten to feel derivative of other movies you might be better off watching instead, but while Kate was so generic and by-the-numbers that it was devoid of any individuality, Gunpowder Milkshake actually has much more of a personality, sense of style, and a livelier tone which certainly makes it by far the better of the two – but not a perfect outing, by any means.

The film stars Karen Gillan as Sam, a professional assassin who works for a mysterious firm overseen by Paul Giamatti’s Nathan. Sam is heavily entrenched in her work, largely because she grew up in it with her mother, Scarlet (Lena Headey), also working as an assassin for the firm until she was forced to abandon her daughter and go into hiding fifteen years prior. When she is given an order to hunt down an accountant who has stolen a large sum of money from the firm, Sam soon becomes involved in the ransom delivery of a young girl named Emily (Chloe Coleman), which in turn leads her to become a target not just by the firm, but a brutal gang of thugs led by Jim McAlester (Ralph Ineson), who wants revenge for his son’s killing. To survive, and with young Emily in tow, Sam must rely on the help of her mother, who resurfaces after years in hiding.

Like Kate before it, Gunpowder Milkshake contains a lot of familiar assassin movie tropes, including the powerful hit-person organisation that the lead character works for, the child who becomes a ward to said main character (and who might also be directly involved in one of their recent killings), the thuggish goons sent to attack them, and the inevitable climactic shoot-out. However, this film – and its director and co-writer Navot Papushado – just so happens to inject more life into the clichés, enough to give it not only a sense of fun and actual enjoyment that Kate was sorely lacking, but also introduce its own quirks and tongue-in-cheek spirit to display a slightly more unique identity. Papushado deliberately gives his city backdrops the virtual look of a technicolour Sin City knockoff, while some of the more practical sets like a bowling alley and a library are made to look like fanciful locations you’d normally see in a Tim Burton or Dario Argento movie, all of which are fun to look at as well as rather gorgeous and finely layered.

It also has a way with its humour and characters which also lend to some entertaining set-pieces. One fight sequence requires Karen Gillan to battle a set of giggling henchmen (high on laughing gas, incidentally) without the use of her arms, which have been numbed by a doctor played by Michael Smiley; this paves the way for some highly physical choreography that can be funny but also gruesome at the same time, as you can also giggle at the inconvenience but also wince as she still manages to take down her opponents with about as much force as John Wick. There are also supporting characters who you’re very eager to find out a lot more about (and given that a sequel has officially been announced, we may well yet see more of them in action); for instance, there’s a group of “librarians”/weapons armourers played by Angela Bassett, Michelle Yeoh and Carla Gugino, and they have a very interesting way about them where you’re more interested in what their backstories are and how they function in this world of assassins than you are the main story of the film.

Sadly, that is where the film comes up a little short. Although it’s got considerably more life and charm than a much more average assassin action movie, the plot for Gunpowder Milkshake still falls into that familiar category where you see a number of the twists and turns coming, with lead characters who are more or less the same familiar archetypes you see all the time in these sots of films, only with slightly punchier and more self-aware dialogue. The villain is also pretty weak, with even the movie itself spending more time on Paul Giamatti (who’s really just a minor supporting character) than Ralph Ineson’s big bad, which reduces his oerall threat since we rarely ever see him do villainous things other than growl menacingly at the other end of a phone.

While it might not exactly be a new assassin franchise to rival John Wick, Gunpowder Milkshake is at least trying to leave an impression with its kookier personality and neon-lit attitude. It’s entertaining to watch all the same, even if the plot never fully engages, but I suppose that’s what the sequel’s going to be for – either way, this is the new assassin action movie to stream this weekend instead of Kate, by a long shot.

Gunpowder Milkshake is a mostly entertaining assassin action movie with a quirky attitude, a neat style and some fun characters, even though the plot is very standard for this kind of film.

Gunpowder Milkshake is now showing in cinemas nationwide – click here to find a screening near you!

It is also available to stream on Sky Cinema and NOW TV.