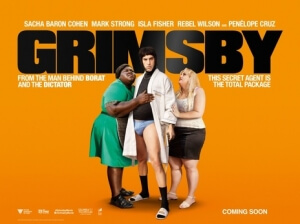 BASICALLY…: Dim football fan Nobby (Cohen) finally tracks down his long-lost brother Sebastian (Strong) – who turns out to be a black-ops spy – and both of them must team up to save the world…

We’ve seen a good share of bad movies so far this year, like Dirty Grandpa, Point Break, Dad’s Army, Jem and the Holograms, and others. But we’ve found one that makes all those films look like Deadpool by comparison.

Grimsby is foul, remorseless, vile, ugly, repulsive, offensive, degrading, loathsome, insufferable and every other word in the thesaurus that can be used to describe this piece of absolute tripe, and it deserves to be called a whole lot more just off of the complete disregard and even contempt it has for its own audience. This is the kind of film that treats them like complete idiots, pandering to the lowest common denominator by presenting a slew of shock laughs that aren’t even funny on their own merits, and presenting a script that makes no worldly sense other than to somehow lower the brain-cells of anyone who ends up watching it.

It’s honestly hard to know where to even begin with a film like this – though perhaps a logical starting point would be with the man at its very centre. Sacha Baron Cohen, who not only stars but also shares both writing and producing credits, has gotten away with making this kind of offensive material in the past, with Borat perhaps being the most prime example and other films like Ali G Indahouse, Brüno and The Dictator following immediately after. But there’s a fine line between something like Borat and now Grimsby; for one, the humour and shock value in Borat was much more effective and even funny because it took an interesting approach with the mockumentary style – incorporating actual responses from unassuming members of the public – and was smart enough to address how the backwards perspective of its main character was wrong in a more civilised society. Grimsby, however, shows how Baron Cohen seems to have taken several giant steps in the wrong direction, resorting to using regional and international stereotyping that’s more nasty and cartoonish than it is genuinely satirical, and using perhaps the foulest means of gross-out humour – including a recurring HIV gag, and another so horrendous it needs to be part of another paragraph – that just shows the desperation instead of the non-present wit it seems to be going for. Baron Cohen has put together a film that discredits everything that made him a popular comedian in the first place, and raises a middle finger to the masses that helped him become something of an icon in this particular industry.

Baron Cohen brings down along with him genuine talent who all seem to be utterly baffled as to how they ended up doing such a horrid film, which makes things all the more depressing. The utter waste of high-profile actors like Rebel Wilson, Ian McShane and Penélope Cruz is bad enough, but for most if not all women to be given next to nothing to do, not even a funny line between them – particularly Isla Fisher as a one-note Moneypenny type, which is a particularly damning piece of casting when you know that Fisher is actually Baron Cohen’s off-screen wife – all ethnic actors like past Academy Award-nominated actors Barkhad Abdi and Gabourey Sidibe being given such degrading racial stereotypes to play against their better judgement (if that doesn’t symbolise the current diversity epidemic in Hollywood then what else does?) and especially poor Mark Strong who has to put up with scenes of pure debauchery where even he looks confused as to how he’s doing something that is far, far beneath him, is almost reprehensible.

Even director Louis Leterrier, who in the past has proven to be a decent action director (well, mostly; Clash of the Titans was rubbish), does an incompetent job at handling both the comedy – the moment anyone starts using CGI in a comedy for simple things like blood and animals is the one where they need to step away and reassess their methods, and Leterrier is no exception here – and especially the action, which resorts to the most bombastic and incomprehensible camera work that will give you a headache by the ten-minute mark. Like the audience, he also seems to be in a rush to make this film go by as quickly as possible, with multiple scenes going by at a moment’s notice so it can all fit into its relatively short running time of 83 minutes (this is the one and only mercy this film actually shows for its viewers) which means that character development is all but non-existent, story is just as undercooked – this film somehow has not enough plot, and yet has too much plot at the same time – and gags fall flatter at a much quicker pace than they’d like.

All of this would honestly be forgivable is the film was at least funny, and of course it isn’t; in fact, in terms of what it considers to be actual wit and dry humour, this is one of the worst comedies we’ve seen in a long while. Every single gag in this movie is either targeted towards the easily mockable – much has been made of its particularly damning portrayal of life in Northern England, where every other shop is a chippy and everyone is an alcoholic football hooligan with multiple children in scenarios that make Shameless look like Coronation Street, and even they get off easy next to how this movie treats the physically-disabled, AIDS victims, and the gay community – or designed to make you feel green through just the most horrific examples of gross-out humour we’ve ever seen. There is one particular major set piece involving elephants, but to spare you the nightmares we will divulge no further with the information, though you need to know that what ends up happening, to whom it happens to, and the general outcome of the incident is, quite honestly, the closest we have ever come to throwing in the towel and walking out of the cinema. It was in that scene that this movie went from being just offensively bad to borderline unwatchable, and we had never felt so physically repulsed by a gross-out gag but not in the way they were probably intending. Say whatever you want about Dirty Grandpa (and believe us, we did), but even that film knew when to dial it down with the constant sex innuendos and Robert De Niro acting like a cock; there doesn’t even appear to be a limit that Grimsby has set for itself, and by just plunging straight into the pits of Hell it has damned itself for all eternity.

We can’t even say to check this movie out if you’re a fan of Baron Cohen’s style of humour to begin with, because he’s proven to be much more apt at producing something that is both shocking and funny – even The Dictator has more of an understanding about this particular balance, and that movie wasn’t very good – and this so definitely isn’t. This is a movie that is made for no-one except the masses that think HIV running gags and mistaking penis sizes for levels of fecal matter are a dime a dozen – and even then, they won’t enjoy this that much.