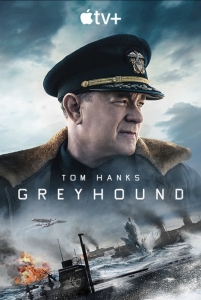 BASICALLY…: During the Second World War, an inexperienced Naval captain (Hanks) leads an Allied convoy across the Atlantic and protect them from Nazi U-boats…

Tom Hanks may be Hollywood’s Nicest Man™, but if films have taught us anything, it’s that he should not be put in charge of anything, because nine times out of ten something is bound to go wrong. In Captain Phillips, his ship got invaded by Somali pirates; in Sully, his plane was forced to land in the Hudson River; in Apollo 13, his mission to the moon quickly went robust; and he couldn’t even keep the toys of Andy’s room in line throughout the course of the Toy Story series. Basically, put Hanks in charge of anything, odds are that everything will go disastrously wrong.

Hanks’ streak of bad luck continues as he assumes the role of another sea captain, this time in the wartime action-drama Greyhound, a film that the actor clearly has a lot of passion for seeing how he also wrote the screenplay (his third overall for a feature film, following his own directorial efforts That Thing You Do! and Larry Crowne). Fortunately, unlike what transpires over the course of this film, it is a smooth and entertaining experience that isn’t necessarily rich with heavy themes or fleshed-out characters, but offers plenty of old-school thrills that make it highly watchable.

He plays Ernest Krause, a US Naval Commander in 1942 who has been assigned to lead a convoy of Allied ships carrying essential supplies to the ongoing war in Europe. Their mission is interrupted, however, by the arrival of German U-boats who will not hesitate to attack and destroy any of the ships, putting Krause and his men on the front line as they try to eliminate the enemy while doing as little damage to their own fleet as possible.

The film is as light as they come, with a simple enough plot that shouldn’t be too difficult to follow, and it doesn’t stretch to be anything grander. In a sense, the lightness of the material can easily frustrate some people looking for a richer experience, especially with someone like Tom Hanks involved; characters, for instance, are virtually non-existent here, with almost zero time devoted to quiet moments with these people or to even understand what they’re all about. The dialogue, too, is nearly entirely comprised of naval jargon that Hanks and other crew members bark towards each other constantly, which again leaves very little room for any of these people to interact with each other as actual human beings. There appears to be little humanity put into the people we’re supposed to be following here, and because of that it’s entirely understandable why some viewers might not warm to this movie as much as others.

However, one would argue that the lack of human depth and characterisation is supposed to be the point of this movie. We are on board this vessel for almost the entirety of the film, where all hands are literally on deck and keeping as much focus on the mission at hand as much as they can; put simply, there isn’t any character growth or establishment here because there isn’t time for any of that. The film moves along at a fairly quick pace, clocking in at just over 90 minutes, and much of it is spent on Hanks giving orders so that his ship and the countless others he is charged with protecting can dodge the missiles and gunfire of the enemy U-boats, which the film establishes as being a lengthy and entirely focused mission in and of itself – the guy is on his feet so much in this movie, that he even starts to bleed at the heels later on – that, again, leaves no room for a moment to breathe. What Hanks and director Aaron Schneider have done here is recreate the environment of a wartime US Naval ship in the most realistic way possible, from the constant orders and messages being delivered as rat-a-tat as the gunfire, to the smaller details like window wipers and radio communications (in one of the more intimidating scenes, the Germans hijack their airwaves to deliver an antagonising message). It’s honestly rather refreshing to see a film like this try and be a straightforward recreation of historical events and environments, and it’s clear that both Hanks and Schneider have put a lot of thought and dedication into making this film feel as though you are right there alongside Hanks and the rest of the crew at this moment in time.

The action sequences are well-paced and intense, even when they’re often accompanied by some questionable CGI, and the rare few scenes where characters actually express emotion are well-acted and beautifully subtle (Hanks, who is very much on form here, gets a nice little moment right at the end). It is a well-made and very entertaining movie, but again it wouldn’t surprise me if a number of people ended up not enjoying it because it lacks some of the fundamental foundations of any kind of storytelling, though it can be argued that the more realistic interpretation gives that exclusion some kind of meaning.

I also want to point out that this movie ended up going straight to Apple TV+ instead of cinemas as it was originally supposed to (damn you, COVID), which is kind of a shame that it did because this is the kind of movie that, regardless of what you might think of it, does deserve to be shown on a big screen. Obviously that can’t happen now, but if it did then it’d be worth going to see just to fully immerse yourself into the world that Tom Hanks has helped to recreate.

Greyhound is a light but entertaining action-drama that certainly doesn’t have much to offer in the character department, but makes up for it with an earnest and more realistic depiction of high-pressure wartime Naval environments that star and writer Tom Hanks has clearly put a lot of heart and effort into feeling as believable as possible.

Want to decide what the movie’s like for yourself?
Check out Greyhound streaming links
via