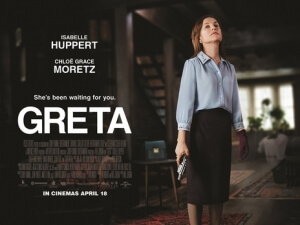 BASICALLY…: A young woman (Moretz) befriends a lonely and much older woman (Huppert), but soon realises that she is not what she seems…

Getting an actress as revered as Isabelle Huppert to star in your movie is already a major gain, but getting her to be the crazy stalker in your trashy stalker thriller is something else entirely.

I can’t imagine what must have been going through writer-director Neil Jordan’s head when he first learned that the French actress had expressed interest in the part, but I’d like to think it was something of hyperactive joy, because while she’s already a strong actress, she seems to be at her best when playing someone completely and utterly deluded, and Greta allows her to play the part with an incredible amount of fun, even if the rest of the film isn’t perhaps as well thought-out as her performance.

Huppert is the titular woman whose handbag is returned to her by a young woman named Frances (Chloë Grace Moretz), who found it on the New York subway. Frances takes pity on the lonely Greta, and strikes up a friendship with her – but things quickly take a turn when Frances discovers a whole cabinet full of handbags, all with different girls’ names, leading her to realise that Greta has been planting them across the city as bait. She tries to break off contact with Greta, but she won’t take no for an answer and begins stalking the young woman at her job as a waitress, harassing her roommate Erica (Maika Monroe), and making her life a living, breathing hell.

Greta, put simply, is not right in the head, and to its credit the movie doesn’t make it too much of a secret early on; we can already sense that something is not right about this woman from the very first time we and Moretz’s character meet her, from the way she composes herself to some of the tiny inflictions across her face, and things only get crazier from there. This character does some insane things throughout this movie, from standing outside the restaurant Moretz works at for hours on end just to stare daggers at her, to following Monroe throughout the city whilst taking pictures of her and sending them to Moretz, to raising utter hell whilst inside the restaurant in a standout scene, and each one is crazier than the last. Needless to say, Huppert is having the time of her life in this part, delivering the right kind of campy, over-the-top insane performance you’d associate with some of the more classic stalker thrillers like Fatal Attraction or Play Misty For Me, but doing it in a way that’s fun to watch whilst also being very intimidating. Even though the film takes several steps that feel very familiar for this kind of film, you’re still left wondering where it’s all going to lead, because Huppert is going for it so hard here that she constantly leaves you on edge and without much certainty over what’s likely to happen next.

Fans of Neil Jordan’s work such as The Crying Game, Mona Lisa and The End of the Affair will mostly likely dismiss this film simply because it’s substantially nowhere near as good as those, but it doesn’t seem that the filmmaker ever set out to make something that would be on par with them; it seems like he just wanted to let loose and make a trashy, incredibly campy B-movie stalker thriller with a little bit of star power, and if that was indeed his intention then he’s succeeded. It’s a completely throwaway movie, but an entertaining one at that; it’s also very well-made, with Jordan directing his scenes and actors with enough genuine suspense to leave you seriously creeped out by all of it, and outside of Huppert the acting is fairly strong with Moretz also being on top form, as is the decent support including a charismatic Monroe, Zawe Ashton who leaves a mark in her sole scene of the movie, and Jordan regular Stephen Rea in a smaller role as a private investigator.

Because it feels as though it’s intended to be silly and campy from the very start, you’ll either give a pass to the numerous flaws and faults in the script, co-written by Jordan with Ray Wright (who’s known for more conventional horrors such as Pulse, Case 39 and the 2010 remake of The Crazies), or let some of the nonsense irk you a little bit. Personally, they didn’t bother me quite as much as they probably would some other people, but that’s not to say this is a particularly smart movie; it’s got some plot holes that don’t make a whole lot of sense, and characters who constantly do stupid things only so that the plot can move forward, so I can understand why some people who go and see this end up not liking it for those reasons. For me, though, I was able to forgive it for a lot of its flaws because, again, it never feels like it was intending to be a truly sophisticated movie; this is a film where Isabelle Huppert flips over an entire table in a restaurant whilst screaming at Chloë Grace Moretz, for goodness sake. I did have fun just switching off my brain for a short while and letting all the insanity of this story and especially its title character play out right in front of my eyes, while completely aware that this is very much trash that I just happened to enjoy staring at for 90-something minutes.

That’s probably the best way to enjoy this film, by having the knowledge beforehand that you’re not getting something desperate to be taken seriously, but rather setting out to entertain you with its wildly crazy and incredibly campy delivery and execution. Go in with that mindset, as well as the fact that you’ll be seeing Isabelle Huppert flip over some tables at some point, and you’ll have a good enough time.

Greta is an entertainingly crazy, if familiar, stalker thriller that embraces its campy and trashy intentions, and delivers something that’s well-made, well-acted – especially from an outstanding Isabelle Huppert – and a lot of fun as a result.

Check out Greta showtimes in London
on Walloh.