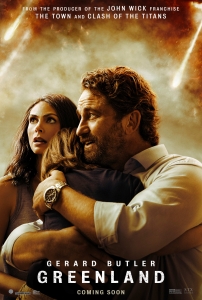 BASICALLY…: A family races for survival as a passing comet threatens to hit and decimate the planet…

Disaster movies nowadays no longer look or feel like Independence Day; they’re more like Independence Day: Resurgence. Over the last couple of decades, the genre has been dominated by hollow CGI and stock characters in films like 2012, San Andreas and Geostorm; a far cry from classics like The Towering Inferno, The Poseidon Adventure or, indeed, Independence Day, which at their cheesiest still managed to impress with their genuinely state-of-the-art visual effects and compelling character arcs. Today, though, it’s hard to even tell some of them apart, because they all look and act the exact same, and they’ve become boring and predictable as a result.

Not so much with Greenland, though. Beyond it being one of the stronger disaster movies in recent years, it gets right what a lot of those other examples didn’t: it’s not just about the disasters. You can put in as much (or as little) destruction as you want, but none of it is worth a damn unless you actually care about what’s happening, or who’s it’s happening to. By putting a greater emphasis on grounded character dynamics, as opposed to stopping every five minutes to blow up an iconic monument, Greenland achieves the impossible and makes the disaster movie a compelling and suspenseful genre once more.

Our focus is on the small Garrity family, made up of structural engineer John (Gerard Butler) and his wife Allison (Morena Baccarin) who, when we first meet them, seem to be on the verge of separating, and their young diabetic son Nathan (Roger Dale Floyd). Like the rest of the world, they are waiting for a recently-discovered interstellar comet to pass by Earth, but when giant fragments begin falling into the atmosphere and devastating entire cities, with an even bigger one predicted to eventually hit and trigger an extinction-level event, the race is on for pretty much everyone to make it to shelter in order to survive. Initially, the Garrity family has an advantage since John has been granted exclusive access to board a plane towards an underground bunker, but with everyone around them desperate to make it out alive, the family’s path to safety is not as straightforward as they’d have liked.

What makes Greenland such an intense experience is how surprisingly bleak it can be. This is not the kind of disaster movie where our heroes must drive through a destructing CGI city while making increasingly implausible stunts along the way, with an obnoxious comedic sidekick there to drop in a one-liner every other second. In fact, the focus is way more on the difficult choices that our leads are forced to make, and the devastating emotional toll it takes on them and the people they’re effecting; early on, their neighbour tearfully begs them to take her daughter with them, but since John and his family are forbidden from bringing anyone else with them they are forced to decline, even if it means that people they’ve known for years will almost certainly perish as a result. The direction, writing, and certainly the acting are all so on point and feel eerily realistic that these moments leave a much greater emotional impact than any of Roland Emmerich’s post-Independence Day filmography combined, and as we see more and more people committing heinous acts just to be in with a chance to survive, it’s even tougher to stomach because it all feels like real things we would actually do if faced with this situation.

Not since Steven Spielberg’s War of the Worlds has a movie like this felt well and truly grounded, not to mention truly subversive with a lot of disaster movie tropes and clichés being done in ways that do not effect the believability of the main characters’ journey. There is a part in this movie where the young kid’s medical condition becomes integral to a major sequence, as there often is during one of these movies, but instead of it being something that feels entirely contrived, the moment is handled realistically and allows for some very well performed character moments which are written smartly without steering too far into cheesiness. It’s a radical departure for director Ric Roman Waugh, whose last film Angel Has Fallen – also with Gerard Butler – relied much more on stock genre tropes which made that movie far less interesting, but here he’s working with better writers who actually give these characters enough space amidst the carnage to feel like developed, realistic people who are easy to root for. The casting of Butler is also somewhat radical, because we’re used to him being the tough action hero who will punch, kick and swear their way to victory, but here he’s playing a much more normal guy who, when placed in physical confrontations, reacts like anyone who’s rarely ever been in a fight, and it’s surprisingly not that hard to buy him here as more of an everyman than we’ve seen him be in recent years (it also helps that this is also perhaps the strongest he’s been in a lead role for quite some time).

There are parts in the movie where sometimes it can certainly feel like just another disaster flick – there are one or two big CGI explosions which don’t look too great, and a later scene with a car on a runway slightly stretches its plausibility – but they are far and few in between, because this movie is smart enough to put its lead characters before anything else, and because of that we are far more emotionally invested in their plight than which major city is going to get destroyed next. It definitely isn’t a cheery, happy-go-lucky movie, but then a movie about the actual end of the world was never really going to be; what is truly shocking, though, is that Greenland isn’t just another 2012 or The Day After Tomorrow, and is a disaster movie that actually cares about more than what’s getting blown up, and does so in a way that feels smart, compelling, and entertaining all in one. It is, ironically, the furthest from a disaster you could imagine.

Greenland is one of the more compelling and genuinely entertaining disaster movies in years, with a far greater focus on its characters and bleak, grounded consequences rather than endless destruction, all of which are smartly written, well-acted and carefully directed enough to feel truly unique amongst its mindless CGI-bloated competitors.