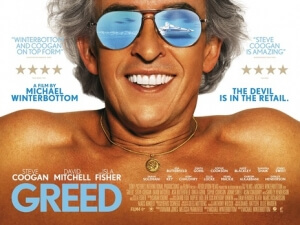 BASICALLY…: High street mogul and billionaire Richard McCreadie (Coogan) plans an extravagant party for his 60th birthday, in an attempt to rebuild his public image…

At some point during Michael Winterbottom’s Greed, Steve Coogan’s boisterous “king of the high street” brutally berates a timid store manager for his choice of interior colouring, instead pushing for fuchsia because it’s more “in your face”. When you see the final results a little later on, the colour is certainly striking and attention-grabbing, but beyond that it’s nothing more than a thin ploy to lure in consumers who think they’re getting something deeper than they’re actually getting.

That kind of sums up the movie as a whole, too.

When I first reviewed the film back in October, during its initial run at the BFI London Film Festival, I thought that while it didn’t exactly feel fresh in its targeted bite towards the lifestyles of the obscenely rich, it had a number of strong elements which just about held it together. Watching it for a second time a few months later, knowing exactly how everything pans out, I felt that the shock element I experienced the first time was missing almost entirely, and all I was left with was something much emptier and more heavy-handed than I previously realised.

As a refresher of the plot, it revolves around Coogan’s character Sir Richard McCreadie, a high street fashion mogul who’s been at the forefront of a number of public scandals, including the enormous amount of debt his companies have fallen into despite McCreadie and his close family and associates pocketing even more millions for themselves. In an attempt to wipe clean his public image, he plans an extravagant 60th birthday party on the island of Mykonos, where nearly everything from uncanny celebrity lookalikes to a group of Syrian refugees spoiling his view on the beach gets in the way of his intentions. Beyond that, though, details about McCreadie’s shady business dealings begin to come to light through the eyes of his biographer Nick (David Mitchell), which threaten to seal the billionaire’s fate forever.

As I touched upon in my previous review, the film makes things easy for itself by selecting a very obvious target – in this case, the over-the-top affluence of the 1% – and firing at it with arsenal that many others have fired at it before. Yes, it’s not that hard to laugh at Coogan’s painfully whitened teeth, or the insane legal loopholes that allow his character to retain his wealth, or even the costly knick-knacks that rich people buy each other as useless room decorations, but it soon becomes obvious that there isn’t much else beneath the surface. When the joke is simply “look at this stupid thing that this rich person has purchased” without much of a punchline to follow it up with, it starts to come up short in the comedy department and just becomes an awkward parade of wealth that we can certainly get angry about, but doesn’t take enough risks for us to laugh at it either. It wasn’t until this second viewing that I noticed a lot of the humour was falling a little flat, despite the reliable efforts of Steve Coogan – who, let’s be honest, can play this sort of narcissistic bully in his sleep by this point – and a cast of very game supporting players and starry cameos (among the latter is the late Caroline Flack who briefly appears at the start, and is given a hastily-added “In Memory Of” credit before the opening logos) who do their best to make the material work.

Sadly, this isn’t one of Michael Winterbottom’s sharpest movies, nor is it even his strongest collaborations with Coogan; the pair have worked together on a number of projects, from 24 Hour Party People to the ongoing TV series The Trip alongside Rob Brydon, and while it’s not necessarily their weakest outing – in fact, the movie isn’t overall bad; it’s just wildly mediocre – it lacks the real bite and subtlety that some of their other movies perfected. Every time the movie stops to spell out what it’s trying to say, you wish that both filmmaker and lead actor would use more of their wit and sophistication to deliver their message in a way that feels a little more genuine; how it ends up feeling here, it’s like someone wrote a long Twitter thread that criticised the rich lifestyle, not because they actually believe any of it but because they think it will get them tons of likes and retweets. The fact that is about as deep as something you would find on your Twitter feed forms a major chunk of the disappointment towards this film; again, these are talented people who came together and made this movie, and the fact that it takes such a thin stab at a topic which should be ripped apart with much more ferocity than they’re giving it feels very underwhelming and even anti-climactic.

While I admit that this film doesn’t exactly hold up for me on multiple viewings, that doesn’t mean it won’t strike a chord for anyone else. For all I know, anyone going to see this film will probably get exactly what they want out of it, whether it’s a laugh-out-loud satire of the rich or a scathing attack on the injustice of it all, and in that regard I’m hopeful it will find that kind of an audience. Unfortunately, don’t count me as being a part of it.

Greed is a largely toothless satire of the lifestyles of affluent billionaires, aiming for an easy target and firing with all too safe and obvious arsenal, and lacks the true sharpness of director Michael Winterbottom and star Steve Coogan’s previous collaborations, despite the latter’s clear efforts to try and find some laughs in this otherwise lacking satire.

Want to decide what the movie’s like for yourself?
Check out Greed showtimes in London
via