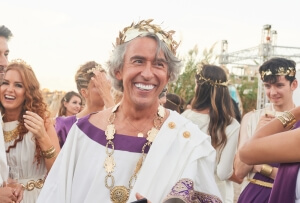 BASICALLY…: A high street billionaire (Coogan) runs into numerous problems as he tries to throw an extravagant 60th birthday party…

This review is of the cut shown at the BFI London Film Festival in October 2019 – the UK release date is currently listed for February 21st 2020.

When it comes to satire, the lifestyles of the rich and famous are an incredibly easy target. From the wildly over-the-top ways in which they use their wealth, to how they exploit the hard labour of the working class for their own benefit, the 1% have endless attributes which can be used for riotous, and often rage-inducing, comedy.

Michael Winterbottom is the latest satirist to dig into that pit with his latest film Greed, an often amusing but surprisingly insightful look into the parts of high street commercialism that we don’t often consider.

Winterbottom’s film focuses on the life and times of Richard McCreadie (Steve Coogan, a regular collaborator with the director), a self-proclaimed “king of the high street” who’s made billions from his several high street endeavours. As he approaches his 60th birthday, in the wake of several bouts of bad press following a disastrous parliamentary inquisition into his questionable business practises, he decides to throw an overly-extravagant party for his rich friends and close relatives on the island of Mykonos. As the guests start to arrive, including his ex-wife Samantha (Fisher), his moody son Finn (Asa Butterfield), his vapid reality-show star daughter Lily (Sophie Cookson), and his opinionated mother (Shirley Henderson), a whole slew of problems begin to show their ugly faces, from the troubled construction of a Gladiator-style amphitheatre – complete with its own lion – to a group of Syrian refugees camping out on the beach right in front of McCreadie’s venue, to his official biographer Nick (David Mitchell) uncovering several alarming methods which McCreadie uses to further his own profits, including taking advantage of several sweatshops in Sri Lanka.

The plot and main character is very clearly meant to be a stab at real-life business tycoon Philip Green, the man behind many high street favourites such as Topshop, Dorothy Perkins, and the recently-defunct BHS. The character of Richard McCreadie – nicknamed “Greedy McCreadie” by several people in the media and those who were formerly acquainted with him – shares a lot of similar attributes with Green, not just his vast wealth but also his demeaning, bullying attitude towards people when they end up doing things that he simply does not agree with. The parallels may be obvious, but Winterbottom also uses this opportunity to point out the several injustices that Green and other wealthy businessmen partake in to secure their wealth, from tax havens to lucrative deals which see the other party sometimes get royally screwed over, which the filmmaker does by inserting some entertaining montages showing the ins and outs of this fictional character’s practises. At times, it feels like the kind of movie that Steven Soderbergh’s The Laundromat desperately wanted to be, but it was far too convoluted and self-important to properly get these sorts of messages across. This one adopts a much less serious attitude, but still has its targets in plain sight, which alone makes it the stronger satirical look at wealth through exploitation.

That isn’t to say, though, that those targets are things we haven’t seen before, because they most certainly are. Films like The Wolf of Wall Street, The Big Short and more recently as Hustlers have shown extravagant lifestyles in such over-the-top manners previously that Greed sometimes feels like it’s trying too hard to match the ridiculousness of those films, and it often doesn’t feel like it’s adding a whole lot that’s new to the conversation. Jabs at the scripted nature of reality television and the advantages of privileged education aren’t as fresh as the movie probably thinks they are, and they lack the subtlety of some of the denser satires out there (a closing montage lists the alarming figures of working class exploitation, set to ABBA’s “Money, Money, Money”). However, at the very least, Winterbottom and his cast are clearly having fun with sending up the dreadful lives these rich people lead; Coogan, an underrated actor beyond his comedic talents, is utterly devilish as a person you’d love to punch right in his overly-white teeth, and there’s some memorable turns by the likes of Isla Fisher and Shirley Henderson as the main character’s vapid ex-wife and mother respectively.

There is clearly life that has been injected into this movie, thanks to the entertaining style that Winterbottom brings as well as the larger-than-life performances, and it definitely knows what it wants to say about wealth and the vast exploitation of workers in less-economically sound countries. It just doesn’t feel fresh, as again it’s incredibly easy for any satirist to focus their energy into mocking the lifestyles of the rich and famous, but in order for it to stand out from the rest there needs to be something else to it that will hold your hand throughout all of it. Although Winterbottom’s film leaves you mostly entertained, it just feels like a run-of-the-mill attack against the wealthy, and will probably just make you want to watch The Wolf of Wall Street again.

In short, Greed is good – but it never goes beyond that.

Greed sees Michael Winterbottom focus his satirical energy on the lifestyles of the rich and famous, an easy target which he and his cast are clearly having fun with, but they struggle to find something truly fresh to say about any of it.

Want to decide what the movie’s like for yourself?
Check out Greed showtimes in London
via