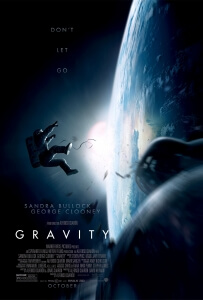 BASICALLY…: Two astronauts on a simple space mission (Bullock and Clooney) are forced to survive after a deadly accident…

A static version of the Warner Bros logo. Some text detailing how “life in space is impossible”. The title “GRAVITY” stretched out across the screen. A crescendo of music reaches its highest peak. And then… we’re there. Looking down on the Earth as we, the audience, find ourselves floating about in the vacuum of space, just skimming the surface of the atmosphere. So begins a breath-taking fifteen minute-long unbroken shot that introduces our main characters, sets up the dynamics and situation, and gives us a flavour of the visual wonders we are about to experience. So also begins Alfonso Cuarón’s Gravity, his first film in seven years, and as you might expect it is beyond worth the wait. It is something to truly behold.

What can one say about this film that every other critic in the world hasn’t said already, how can one bring a new style of critique no-one’s tried on this film before? The answer, to the best of knowledge, isn’t possible at the moment because what everyone has said so far about it really is true. It’s suspenseful, it’s action-packed, it’s a film that gives us what we came in expecting and a little extra, it’s just fascinating. But is it enough to label Gravity as one of the films to beat on this year’s end-of list, if not the film to beat?

At its core, the film is just your basic survival movie. Cuarón’s script – co-written with son Jonás Cuarón – approaches it like any other in the genre and shows how the tropes can still be effective despite how they may have been done quite a few times before. In the end, that doesn’t matter – it feels like you’re seeing these familiar plot beats for the first time and are gripped to the edge of your seat whenever a new development arises no matter what. However, anyone looking to dive deep into the characters’ backstories or the complex undertones within its story might feel a little let down because it’s very thin material that’s been used. It’s a simple story populated with simple characters. Nothing more, nothing less. However, they’re still very effective and they work brilliantly BECAUSE of their simplicity. The very idea of being trapped in an atmosphere where you cannot breathe as well as being faced with the idea of spinning further and further into the darkness of outer space is already a lot to take in, and we do not need a multi-layered narrative to make our heads hurt any more than they currently are. It’s a perfect balance of style and substance, especially since this is a movie where the style could have so easily outweighed the substance.

If the director’s Children of Men was a breakthrough in digital filmmaking, then Gravity is a defining landmark within the medium. Cuarón directs his continuous takes – seriously, there’s at least five – with great delicacy and superb eye for the camera, remarkable in never allowing the visual effects or cinematography to blind his vision for character and storytelling. Those shall be explored in great detail momentarily, but for now Cuarón has mastered the art of filmmaking enough now to certify him as one of the decade’s unsung pioneers behind the camera. Keep in mind that James Cameron, another director who takes his sci-fi craft very seriously, has hailed Cuarón’s film as being one that actually understands the realities and environments of space. Now that’s a compliment if we ever heard one.

The trick with casting big names like Sandra Bullock and George Clooney, both having a fairly strong individual fan base, is that it gets more people interested in the film than could ever have before. The key is getting them to actually give strong and memorable performances so that they will be fondly remembered as much as the visuals, which they indeed do. To paraphrase a Neil Armstrong quote, Clooney takes one small step into the background, allowing Bullock to make one giant leap into the spotlight (apologies to astronauts everywhere). The latter emerges as the true protagonist that dominates the second half of the movie, and while it is technically a one-woman show for the most part Bullock handles the material well enough to carry it on its shoulders. Aside from a tragic incident with her young daughter, we do not know that much about her yet we still want her to make it home and keep on living. In one scene, she uses a radio to signal for help, and somehow gets through to an Inuit man with a baby and pet dogs. It’s when she starts barking along with the dogs in an ill-fated attempt to gain communication that we realise she’s cracked in her attempts to be rescued, and Bullock really sells that moment capturing the raw desperation of a person without much hope left. She’s a fighter until (what seems like) the very end and it’s a testament to the actress to make the character meatier than she was already written. [On an interesting side note, Jonás Cuarón has made a short companion film entitled Aningaaq which situates the aforementioned radio communication from the Inuit’s point of view of Earth. Expect to see it featured on the DVD/Blu-Ray release early next year, and see how it fits within the overall narrative] Clooney does not get as much material to play around with, stuck in the calm and charming role that keeps Bullock from losing hope, but he still does great with what he has been given and creates a positive and likable side-character for Bullock’s undisputed protagonist. Also hear out for a voice cameo by Ed Harris as Mission Control, in a nod to his role in Apollo 13.

Not even the star-power of Bullock and Clooney, however, can distract from what is the absolute star of the entire motion picture: its visuals. Make no mistake, when it comes around to the Oscars next March, Gravity WILL win at least one technical award for either its visual effects or cinematography, or most likely both. This is the most realistic the outer skirts of the Earth’s atmosphere and the black depths of space has ever looked on the big screen in a fictional format, and whatever they have achieved to make it look as fantastic as it does needs to be documented and studied by any aspiring visual effects artist. Emmanuel Lubezki’s cinematography… we hesitate to use the more obvious pun “out of this world”, so we shall instead say that it makes everything look absolutely incredible that it is almost ungodly. Like other DoPs (that’s Directors of Photography for anyone unfamiliar with the abbreviation) that have gone unrewarded come Oscar time – Roger Deakins, Bruno Delbonnel et al – the Mexican-born cinematographer keeps getting better and better, and is a certified front-runner for the gold this time round. Every single shot and camera movement is very well thought out and effective enough to stand alone as its own visual image. His use of 3D is entirely justified, never just used as a cheap gimmick and helping the environments of space seem all the more frightening. When Clooney’s hand reaches out to grab a floating object, you pull your head back to stop him from grabbing it. As bits of debris fly into various space shuttles – and thus cause the situation for our two characters – you start ducking to avoid bits flying into your face. Every year, there seems to be a movie where the 3D enhances the movie perfectly and if Life of Pi was last year’s example and Hugo was before that in 2011 then Gravity is 2013’s equivalent.

Any real problems one might have are very nit-picky and even more miniscule. Sometimes the effects can mask the actor’s ability to emote for the camera – as Bullock talks about her daughter, the reflection of Earth in her helmet and her floating upside down makes it difficult for us to see the performance – and one or two moments seem a little contrived for dramatic purposes, but again they’re not terrible and in no way do they damage the film. In fact, it was hard enough finding just a few minor faults to mention about this movie. The positives most certainly trump the negatives, resulting in a film that will be floating about in your mind ages after you see it.

The only other thing would be that Gravity needs to be seen on the biggest screen possible, preferably an IMAX for the most visual impact. Any other screen does the job just fine, but if you want to experience the full benefits of it on the big screen then IMAX is definitely the way to go.

Gravity is digital filmmaking at some of its finest, anchored by strong direction, a pleasingly simple screenplay, phenomenal use of visual effects and 3D cinematography, and carried by two worthwhile performances particularly by Bullock. It’s been hyped like crazy for a reason.