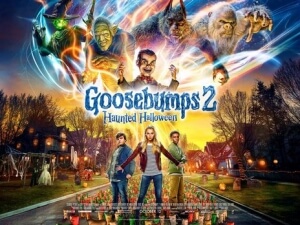 BASICALLY…: After opening a locked manuscript to a Goosebumps novel, two young boys (Taylor and Harris) accidentally unleash a slew of monsters from the books that proceed to cause havoc in their town…

The most I remember about R.L. Stine’s Goosebumps book series was the TV show based on it, specifically the opening title sequence; that eerie theme, some of the spooky imagery, and a couple of shots showing a small amount of the monsters that would pop up in each episode, all of that would certainly seem cheesy and stale to adults, but I can assure you the child version of myself was absolutely terrified by that and then some.

In many ways, Goosebumps 2: Haunted Halloween – the sequel to the hit 2016 film starring Jack Black as Stine – is a lot like how I remember that opening to the TV show; definitely cheesy in places, but to younger members of the audience is bound to be a decently scary and fun enough ride.

Set in a small town outside of New York, the film sees two young friends Sonny and Sam (Jeremy Ray Taylor and Caleel Harris) who, whilst gutting out an old house as part of their junking business, find a treasure chest containing a book that’s sealed with a lock. Naturally, being the curious young scamps that they are, they open the book and – with it being a manuscript to one of Stine’s earlier books of the Goosebumps series – almost immediately find themselves dealing with Slappy the evil ventriloquist dummy, and so they and Sonny’s older sister Sarah (Madison Iseman) must race to stop Slappy before he brings Halloween to life and cause havoc in the town.

I remember the first film being a fairly decent but wholly disposable family film which honoured the legacy of the Goosebumps franchise and had fun with its numerous monsters and ghouls; the second one is really more of the same, particularly when things do start to go full-on chaotic during the second half of the movie, which is when it really just turns into the first film again. However, there are a few things that this movie does a little differently; for one, there’s a heavier focus on Slappy as the main antagonist in this one, whereas before he just kind of came into the picture along with all the other monsters and didn’t stand out as much. Slappy is often considered by fans of the series to be the best character and most effective monster, an understandable gesture seeing how creepy dolls – whether they be Chucky or Annabelle – are usually quite a reliable source for scares, and there are times in this movie where he is shot in a very unsettling way that you would actually see in one of those other creepy doll flicks (albeit in a much more kid-friendly manner), not to mention how he is a fun character in just how much enjoyment he is getting from being bad to the wooden core. He was an enjoyable villain in this one, much more so than in the first one where he was just the de facto antagonist out of all the monsters because he was one of the few who could actually talk.

I can see children having a good time with this film, because there are some fun monsters – an army of Gummy Bears morphing together like The Blob is a highlight – some likeable characters, and of course a very entertaining villain in the form of Slappy. For adults, especially those largely unfamiliar with the Goosebumps series, it might be one of those cases where you’ll be sat there wondering what any of this is doing to set itself apart from other family horror movies like this, and why they’re sitting watching this when there’s a lot of better films with this tone and approach that they could be watching instead. In that regard, I can see where they’d be coming from; the film does have a manufactured feel to it, as though it only exists because the first film was a success at the box office (which probably is the case), and the fact that Jack Black isn’t in a starring role this time around – aside from a cameo later on, which shouldn’t a spoiler because they included him in some of the recent promos – does cause the film to lack any kind of real energy within its main cast; don’t get me wrong, the young actors and everyone else do fine, but when you have such an energetic actor like Black, who just breathes eccentric life into every little part he is given, his presence is sorely missed for a majority of this film which otherwise lacks that same kind of energy (the closest is probably Ken Jeong in a small role as a Halloween-obsessed neighbour, but he’s not in the movie for very long).

The film as a whole is pretty cheesy, but in a way that kids can kind of get a good scare until they’re old enough to experience more adult horror films later in life (or even in their childhood, depending on the parent), and also in a way that older fans of the books can get some kind of nostalgia out of it, even though for them this material may no longer be scary. As a half-term film for this time of year, especially with Halloween coming up, I would say this is perfectly fine to take your kids to; although there are better films out there right now that you could be seeing instead, with this isn’t even being the better Jack Black family horror picture playing at the moment (The House with a Clock in its Walls is still showing somewhere, surely).

But as long as the little ones are having fun, then I guess that’s all that matters, isn’t it?

Goosebumps 2: Haunted Halloween is a sequel that’s more of what you saw in the first film, albeit with significantly less Jack Black and therefore far fewer of the manic energy he usually brings to roles, but this is a harmless half-term treat to take the kids to see that’s certainly cheesy, but the right kind of cheesy that children – and certain adults craving nostalgia for this series – can enjoy just fine.