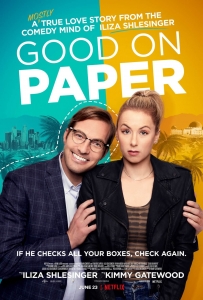 BASICALLY…: A stand-up comic (Shlesinger) meets a seemingly-perfect guy (Hansen), who might just be too good to be true…

Writer and star Iliza Shlesinger isn’t the first comic to adapt a painful real-life experience into a humorous script, but with Good on Paper she does find an interesting new way to detail a potentially sinister plot with a touch of her own brand of madcap and sardonic comedy, and it works… almost.

While it is an interesting enough subversion of typical rom-com tropes, the movie perhaps could have used some fine-tuning in a few key areas, because as it is, it’s a comedy that ultimately feels awkward to watch given a large chunk of its subject matter.

In the film, Shlesinger plays Andrea, a stand-up comic and actress whose career is a little rocky; while she seems to be doing fine as a stand-up, she keeps failing auditions or losing parts to chipper rival actress Serena (Rebecca Rittenhouse), who easily wins over entire rooms whereas Andrea struggles to mildly charm them. Things seem to pick up when, on a plane home from yet another disastrous audition, she meets Dennis (Ryan Hansen), a mild-mannered hedge fund manager who seems to tick all of Andrea’s boxes; he’s nice, he’s handsome, and he’s able to support and be with her at a moment’s notice. Their blossoming friendship eventually turns into a full-blown relationship, but when Andrea’s friend Margot (Margaret Cho) begins discovering some inconsistencies with Dennis’s backstory – from his Yale education to a cancer-stricken mother – Andrea finds her apparently perfect new life starting to fall apart at the seams.

According to Shlesinger, the story which she based her script on is apparently “two-thirds” accurate, a fact which is furthered by opening texts that claim Good on Paper is “a mostly true story [that is] based on a lie”, so going in you are expecting a number of twists that turn the seemingly romantic main plot completely upside down. Where it ends up going, however, and what we eventually learn about this guy, perhaps isn’t best suited for a full-on comedy like this; there are reveals and personality shifts that seem to have come right out of a straightforward thriller, like if Joel Edgerton’s The Gift suddenly got mixed in with Trainwreck, and I understand wanting to come at it from a more comedic angle, but there are some things which are extremely hard to make funny, and the reveals surrounding this main guy touch too much of an uncomfortable nerve that often you forget to laugh amidst the rather disturbing context.

Admittedly, the movie does a fine job at keeping the audience a fair distance from the truth until the curtain is fully raised; the first time we meet Ryan Hansen’s Dennis, there is already something rather off about him, but both the writing and direction underplay that as some sort of geeky quirk instead of anything overtly sinister, and like Shlesinger’s Andrea we’re never quite sure if he’s unashamedly lying or just that adorkable of a person. For the most part, the two leads also have very good chemistry, which further sullies your own judgement as you see that, in parts, they do seem like a perfect on-screen couple; both bring their unique charisma and charm to their respective parts, to a point where you could actually picture them ending up together were it not for what happens next.

However, the film struggles to maintain its overtly comedic tone as it dives deeper into the mystery, especially as it ventures into the third act which becomes both uncomfortable and increasingly contrived to watch, but still retains its loud and overt brand of humour. It’s entirely possible for comedies like this to take on much darker subject matters, but Good on Paper doesn’t quite manage to pull it off, because the script seems reluctant to properly face some of the rather alarming themes that it’s introducing, and tries to stay on too safe a path. Perhaps another re-write or two on Shlesinger’s part could have fixed the severe tonal issues, because the comedian and actress clearly knows what she wants to say here regarding gender identity, toxic relationships and the politics of being likeable, but minces her words somewhat with a script that dilutes a real sense of edge or even sensitivity.

While it perhaps struggles to keep itself together, especially amidst the alarming subject matter that needs more of a thriller approach, Good on Paper is watchable enough, and it gives Iliza Shlesinger a big enough platform to flex her storytelling skills – but in this case, maybe she needed to fine-tune said skills a little harder before presenting them to the world.

Good on Paper is a watchable antithesis of rom-com tropes which, despite good qualities such as winning chemistry between leads Iliza Shlesinger and Ryan Hansen, struggles to maintain its overall tone in the wake of some rather disturbing character revelations.

Good on Paper is now available on Netflix.