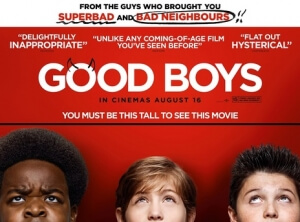 In the growing tradition of raunchy comedies this year looking and feeling like distant cousins of Superbad, Good Boys is the only one to actually come from both of that film’s writers Seth Rogen and Evan Goldberg, who serve as producers. While the more female-centric Booksmart was a smarter, more thoughtful and overall funnier movie to be done in that particular format, this movie has its own little charms to it which definitely make it a fun and funny, but not entirely hilarious, ride for the juvenile kid inside all of us.

Plot is about three young sixth-graders, Max (Jacob Tremblay), Troy (Brady Noon) and Lucas (Keith L. Williams), who are a group of friends that call themselves the “Beanbag Boys”. One day at school, Max is invited to a kissing party, but since he doesn’t know how to kiss, he and his friends try to figure it out with what limited resources they have. One of those resources is Max’s dad’s (Will Forte) drone, which they use to spy on a couple of neighbouring teenage girls (Molly Gordon and Midori Francis) who quickly spot it and keep it to teach the boys a lesson. Thus begins a long journey for the boys to retrieve the drone, which involves carrying drugs, smuggling beer bottles out of a convenience store, discovering their parents’ sex toys, getting into a fight with frat boys, and even crossing a busy motorway.

The marketing is clearly trying to set itself up as a raunchy, profane comedy with leads who aren’t even old enough to be considered teenagers; the problem is, a little something called South Park also exists which consistently takes that concept and really pushes the limits for what it can do with adult-orientated humour with young lead characters. Oddly, Good Boys doesn’t seem to feel the need to push itself as much, and the “raunchy” humour is played bizarrely safe; sure, the kids swear up a storm and do some questionable things throughout, but it’s never to a point where it feels like the writers or director are taking as much advantage of the concept as they really could have. You could argue that was done to not have the three young stars do some very age-inappropriate things on-camera such as smoke, drink etc, but when you’ve seen this concept done before in a much edgier manner such as on South Park, it comes off as a strong argument as to why you could never make a live-action version of the animated series with young actors playing the roles of Stan, Kyle, Cartman, Kenny and the others. Not only that, but because it is quite tame compared to some of the other more recent comedies that Seth Rogen has been attached to – Sausage Party, which actually was animated, was far raunchier and funnier than this movie – it feels like a lesser version of films from that particular wheelhouse, from its stoner humour to awkward sex jokes which this film’s spiritual predecessor Superbad also did a lot better.

While the film doesn’t exactly feel as fresh as it thinks it is, at least in terms of its plot and adult-orientated humour, there are some good things about Good Boys; the boys themselves, for instance, are very good together. Tremblay, Noon and Williams have good chemistry with each other, and they are reasonably likeable characters who have a couple extra layers than you’d probably be expecting upon going into a film like this. Noon’s Troy, for example, is one character who at first looks like he’s going to be the obnoxious and more vulgar one of the group, kind of like how Jonah Hill was the horn-dog next to Michael Cera’s straight-man figure in Superbad, but his reasons for acting so tough and abrasive are made very clear early on, and they turn out to be very relatable for anyone who struggled to fit in at around that age. The way they all work off of each other, in scenes where they are required to show more of their emotions (where tears will suddenly and hilariously appear), is genuinely sweet and shows that the film has a little more heart to it than much lesser comedies in this vein.

There are a good few laughs to be found here and there, many of them coming from the sheer catastrophe caused by the young boys’ antics, and a couple of the side-characters such as a disgruntled cop played by Sam Richardson mine some huge belly-laughs in the short amount of screen-time they have. However, the amount of laughs that this movie manages to get are mere peanuts next to the dozens of other movies that have taken the Superbad model and just run with it; Booksmart is one, and in time I can see that film being remembered more than Good Boys because it’s not only funnier but it had a few more memorable characters as well as its own sense of style and charisma that carried it beyond just the obvious similarities to Superbad. This movie can’t quite shake its influence off of itself, and in some ways it’s a shame that it didn’t take as many risks as it probably could have – especially when you pair this very adult humour with a trio of young actors whose voices haven’t even dropped yet – but at the same time it’s far from the worst film to adapt that familiar formula. Its decent moments of legitimate hilarity, as well as the sweet connection that the three leads share with each other, are wholesome enough to serve as a fine one-off viewing.

But again, I have a strong feeling that a few years from now, when we look back at the two most notable Superbad clones of 2019, Good Boys won’t be the one that most people think of first.

Good Boys doesn’t take as many risks as its set-up promises, but this pint-sized Superbad clone is a decent enough viewing as it does have some good laughs and a winning young trio who adorably hold it all together.

Want to decide what the movie’s like for yourself? Check out Good Boys showtimes in London
via