Godzilla vs. Kong (Review) – It Deserves The Biggest Screen Possible 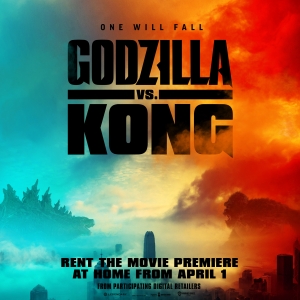 BASICALLY…: During a search for his true home, the giant ape Kong clashes with an enraged Godzilla…

The return of the cinema honestly cannot get here soon enough. Sure, it’s only a month and a half until they can re-open according to current government guidelines, but when movies like Godzilla vs. Kong deserve the biggest screen treatment possible, and all we can manage for the time being is seeing it on whatever the largest sized smart TV you can get your hands on is, suddenly May 17th feels so close and yet so far.

Even on a much tinier screen, though, this film is an absolute blast, giving us exactly what we all want to see and paying very little mind to everything else because, let’s be honest, when you have a giant lizard with atomic breath squaring off against an equally-sized ape wielding a massive axe, who cares about anything beyond that?

A continuation/culmination of the “MonsterVerse” which started with Gareth Edwards’ divisive Godzilla reboot, then continued with Jordan Vogt-Roberts’ awesome Kong: Skull Island, and then stumbled with Michael Dougherty’s Godzilla: King of the Monsters (which, upon second viewing, isn’t quite as bad as I remember it being, but is still the most flawed of this series), director Adam Wingard’s Godzilla vs. Kong picks up sometime after the latter entry. Here, we find Kong – the giant ape who rules over the mythical Skull Island – now under surveillance by titan-centric corporation Monarch, and has bonded with the island’s last surviving native: a young deaf girl named Jia (Kaylee Hottle), the adoptive daughter of scientist Ilene (Rebecca Hall). Meanwhile, Godzilla – the gigantic lizard monster who has become humanity’s de facto defender – has suddenly begun attacking the sites of rival corporation Apex, seemingly without provocation; of course, there’s a larger conspiracy lurking underneath, but while young Madison (Millie Bobby Brown, reprising her role from Godzilla: King of the Monsters) and her friends including crackpot podcaster Bernie (Brian Tyree Henry) and high school pal Josh (Julian Dennison) are investigating, Kong is transported across the world to discover the entry to the “Hollow Earth”, a mythical realm where giant creatures are said to roam.

It’s around this point, though, where the title really starts to become accurate. Godzilla and Kong, in all their gigantic CGI glory, duke it out hardcore on several occasions, and unlike earlier entries in the MonsterVerse (especially Edwards’ Godzilla), there’s no cutting away from the action here; we see their battles in full, and each and every time it’s utterly stupendous to watch. Every punch, jump, bite, chest-beat, atomic blast etc is gleefully entertaining, made possible by Adam Wingard’s vibrant direction which actually allows us to see the action much more clearly than before (even during night-time clashes, the screen is burning with such bright neon colours that it’s almost like watching a scene from a John Wick movie), and some beautiful cinematography that takes advantage of the heavy (but impressive) use of CGI on display to craft some creative and even epic imagery. A grand score by Tom Holkenborg highlights the sheer awesomeness unfolding before your eyes, while the script thankfully never takes itself too seriously as it zones in on the mindless, gorgeous carnage that everyone will have undoubtedly come for, and will leave feeling well and truly satisfied.

Since it works so well as a big, dumb action blockbuster, there’s really little point in digging into some of its less impressive qualities, because the movie delivers on the promise of Godzilla vs. Kong and, as far as many of us are concerned, that’s all we really need. That being said, there’s no denying that there are some really stupid things that happen here, especially among the human cast; while actors like Alexander Skarsgård, Rebecca Hall and especially young Kaylee Hottle – who develops a nice friendship with Kong here – do fine with what little character they’ve been given to work with, the sub-plot with Millie Bobby Brown and her friends feels like it’s straight out of a Transformers movie, complete with the kind of out-of-place humour you’d find in one of Michael Bay’s flicks. Honestly, this whole section of the movie involving them could easily have been trimmed down or removed entirely, because it doesn’t give these characters much to do other than wander about and occasionally get captured by the bad guys. What they end up discovering, however, will be very pleasing to long-term Godzilla fans, and it’s utilised to bonkers effect here, although there is a part very near the end concerning this discovery that may be a bit too dumb to comprehend, even in a film such as this.

Again, though, picking apart a film such as Godzilla vs. Kong for its silliness is like fact-checking a Star Wars movie; nobody really cares about the dynamics of it all, especially when the results are this much fun to watch. It’s a giant monster movie that knows exactly what it’s meant to be and runs with it wholeheartedly, delivering some great monster-on-monster showdowns that’ll be pleasing for anyone who’s stuck with the MonsterVerse all this time, as well as fans of both Godzilla and Kong in general (the ape, in particular, is very loveable here, even during his most brutal and savage moves against the giant lizard).

My one, true gripe is that I really, truly wish that I had seen this on the big screen. I was thoroughly entertained by the movie regardless, but something about it really just makes me want to have seen it on an IMAX instead, where the full effect from its surround-sound to the massive visuals would have really made this even more awesome. Obviously, current circumstances have prevented this from happening (in the UK, at least), though I hope that when cinemas do re-open, Warner Bros does the right thing and re-releases Godzilla vs. Kong on the platform where it was truly meant to be experienced: the biggest screen possible.

Godzilla vs. Kong delivers all the high-octane monster action you’re hoping for, with the giant lizard and ape squaring off in a number of incredibly entertaining sequences that are stirringly realised by strong direction and impressive effects, and as long as you’re willing to overlook its obvious stupidity in parts of the script, it’s a fitting culmination of the MonsterVerse so far that, hopefully, has more awesome face-offs in store for the future.

Godzilla vs. Kong is now available to rent on digital platforms, including Amazon Prime Video.