Godzilla: King of the Monsters (Review)

Godzilla: King of the Monsters (Review) 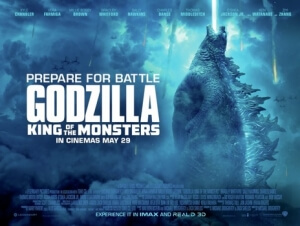 BASICALLY…: A group of humans attempt to survive when a horde of giant monsters – among them the mighty Godzilla – battle each other for supremacy…

A common complaint about Gareth Edwards’ 2014 reboot of Godzilla was that there was very little screen time dedicated to the giant lizard monster himself, and that most of the focus was given to a bunch of dull human characters who, outside of Bryan Cranston’s strong but all too brief performance, just made you want the film to skip directly towards the big monster battles instead.

Things are a little different with the sequel Godzilla: King of the Monsters, this time directed by Michael Dougherty; every time there is a massive clash between one monster and another or several, all you’ll want to do is skip right to the human characters instead – except then you realise that either way, because the humans are somehow even more dull than the last Godzilla film, you’re kind of screwed. Instead, you’re left watching a colossal disaster of a monster movie, one that makes even Roland Emmerich’s much-mocked 1998 version look dignified by comparison.

The plot – or at least, as best as I can describe, because it’s honestly quite hard to fathom what this movie is about sometimes – picks up about five years after Godzilla last lay waste to San Francisco, and in that time the monster firm Monarch (basically the S.H.I.E.L.D of this “MonsterVerse” which also includes 2017’s Kong: Skull Island) has tracked down a number of fellow giant creatures, including Mothra, Rodan and the three-headed King Ghidorah. Things kick off (sort of) when Monarch scientist Emma Russell (Vera Farmiga) and her daughter Madison (Millie Bobbie Brown) are kidnapped by eco-terrorist Alan Jonah (Charles Dance), prompting estranged husband and father Mark (Kyle Chandler) to front a mission to rescue them. Somewhere in between all of that, Godzilla re-emerges from the ocean and battles said monsters numerous times, as though it’s the movie’s direct way of apologising for the lack of monster battles in the last movie.

The thing is, because this movie is virtually non-stop kaiju action from the very first scene, it also very quickly becomes very, very boring. There’s hardly a moment of downtime in the entire thing, because the movie is far more worried about making up for lost time in the action department that they completely neglected to fix many of the previous film’s problems, specifically the fact that the human characters were completely blank slates and that the story was paper-thin at best. Here, both the story and characters are even more dull than before, except this time there are entire plot threads and character arcs that don’t make a shred of sense – Kyle Chandler starts off as being very anti-monster, even wanting them all to be exterminated, but at the drop of a hat he will suddenly be on Godzilla’s side; and despite being built up as a prominent character, Charles Dance just disappears completely from the movie after a certain point, never to be seen again (the guy doesn’t even have a death scene, or at least none that I was paying attention to, because I was zoning out of this movie a lot) – and so you’re left with a boring monster movie that has boring action, boring characters, and a boring story which makes you want to apologise to the Gareth Edwards movie for having issues with its flaws, because they could have been done far worse.

It would be one thing if the action was any good, but it completely fails in that department too. It’s mostly shot in the dark with an overly-shaky camera and with its excessive visual effects thrown directly in your face, which renders it quite hard to watch at times as it’s so disorientating that you need to close your eyes for a few minutes just to not get motion sickness (or you may just be closing your eyes to have a little nap in the cinema, because this movie is so boring that having a snooze in a loud, bombastic cinema is a better alternative than staying awake and watching the actual thing). When the monsters do fight one another, it’s shot so haphazardly and without any kind of apparent brains or restrain behind it that it’s like watching a Michael Bay Transformers movie, except with giant monsters replacing giant robots – in fact, replace Godzilla and his kaiju pals with Optimus Prime and the rest of the Autobots and Decepticons, and you have yourself a rejected script for a now-cancelled sixth Transformers movie (thanks, Bumblebee – no, seriously, thank you Bumblebee).

I can’t say how this movie compares to the dozens upon dozens of other Godzilla movies out there – the majority of them coming from the series’ native Japan – because for all I know about them this might very well be on par, but I seriously couldn’t bear this complete assault on the senses, and I felt it was a total middle-finger to what I already knew about the Godzilla legacy; even naming the movie Godzilla: King of the Monsters after the Americanized version of the original 1954 Japanese film Gojira feels like an insult, because this movie contains none of the pure enjoyment that even the 2014 film had in its stronger moments, and does the impossible by making a giant lizard who can shoot blue atomic fireballs out of his mouth and has one of the most epic roars of all time feel completely and utterly boring.

Next year sees Godzilla go up against Kong in director Adam Wingard’s mash-up of both Godzilla movies and Kong: Skull Island; I can say, without a shadow of a doubt, I’m rooting for the ape.

Godzilla: King of the Monsters is a dreadfully boring sequel to the divisive 2014 monster reboot that amps up the action but makes everything else, from the story to its character, seem even more dull than they already were, and its overly bombastic and disorienting filmmaking can’t even save the action from being pretty difficult to sit through.

Check out Godzilla: King of the Monsters showtimes in London
on Walloh.