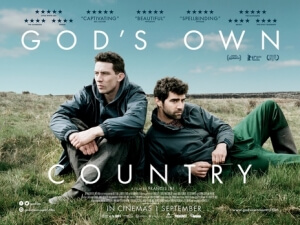 BASICALLY…: A lonely farmhand (O’Connor) develops a strong bond with the new Romanian migrant worker (Secareanu) who has been brought in to assist around his family’s farm…

This year has been pretty light on good, solid romance films so far – they’ve mostly ranged from being merely forgettable like The Space Between Us (a film so forgettable I had to look it up to see what it was about when I saw it on my list of films seen this year), annoyingly twee like Hampstead, and even just plain misguided and disturbing – looking at you, Everything, Everything.

But now along comes God’s Own Country to not only blow all of these out of the water to become the best romance film of the year (so far), but it is so optimistic in its themes and especially its central pairing that it provides a good strong feeling of hope in a world currently riddled with one miserable event after another.

The film, a startling debut by actor-turned-filmmaker Francis Lee, begins as we meet young farmhand Johnny (Josh O’Connor) waking up from yet another evening of heavy drinking. A lonely soul wallowing in self-hating exile, he spends his day carrying out menial tasks on his family’s farm, in place of his aging father (Ian Hart) who has just suffered a stroke, and heading into town where he spontaneously seduces and has sex with another young man. Yes, Johnny is gay, and while it is ambiguous whether he is fully open about it (he never mentions it to his family, though a small amount of others seem to know), he treats it like how he treats everything else and just keeps it to himself. One night, he picks up Romanian migrant worker Gheorghe (Alec Secareanu) who has been recruited to assist Johnny during lambing season, and while at first there is hostility towards this European immigrant, a mutual bond begins to grow at an exponential rate, and soon they find themselves falling hard for each other.

This would be the part where I describe how from this point, it all falls apart due to the overwhelming homophobia that clouds his family’s better judgement, but that couldn’t be further from the truth. Nobody in this movie ever seems to bat an eye toward their relationship, with the only instance of the word “faggot” coming from some playful banter between the two lovers, and the people you’d expect to be absolutely furious with this situation end up being the most helpful and most understanding by the end. That is seriously refreshing to see in a modern-day gay romance, where the central relationship can go about its business without anyone calling to attention how wrong it is, or how it’s against the word of God or bollocks like that. Even Moonlight, which to this day I still like but not enough to (eventually) win Best Picture over La La Land, had several hateful and homophobic slurs against the main character, whereas this really doesn’t have anything like that, making God’s Own Country a surprisingly more daring and subversive film in modern mainstream gay cinema, because it depicts people just accepting it and moving on, which is honestly how it really should be in today’s society.

This is also a romance that you can really get behind and root for these two young men to end up together, because they are so strong together that to see anything come between them would be an emotional disaster. O’Connor and  Secareanu are both fine young actors who display all their respective characters’ flaws and attributes on their sleeves, and they come together (in both senses of the phrase) beautifully to make a mismatched yet perfect couple. O’Connor’s Johnny, for example, is a rather pathetic soul when we first meet him; he’s anti-social, an alcoholic, and seriously slacking on his farming duties to the disappointment of his stroke-ridden father and his stoic grandmother (Gemma Jones), but it is when he begins bonding with the handsome new farmhand he suddenly feels like he needs to finally shape up, for himself as much as for his lover. On the flip side, Gheorghe has just come from a completely different part of the world where nobody would even consider tolerating his desire for men, so his fears of receiving the same kind of prejudice here, not to mention the rampant xenophobia he receives due to his immigrant status, prevents him from taking that extra step into a more accepting society than what he’s previously been used to. Both of these troubled souls fit together perfectly, and the acting is so good from both of them you can really feel the sparks flying between them, and by the end they’ll have you on the verge of tears from just how much you want them to be together.

As a debut filmmaker, Francis Lee creates an isolating and often ghostly environment in the moors of Yorkshire, one that is also incredibly intimate and sometimes starkly beautiful to watch. That includes scenes of dark luminous clouds blanketing the hills during the dawning hours, and several instances of farm animals being treated in situations like birthing, sheering, and in one scene that’s surely hard to watch for any animal lover where a dead lamb’s skin is cut off and placed onto a runt to help warm it up. Throughout all of this, Lee never lingers away from what really matters, which is the fact that these two characters are becoming more and more attached to each other, and more importantly they need each other if they are to have any real chance of making it in a world that’s seemingly against them.

That is part of what makes God’s Own Country one of the best romantic films of the year, and also a strong calling card for not just Francis Lee, but also actors Josh O’Connor and Alec Secareanu to seriously break out and become some of this generation’s finest young performers.

God’s Own Country is an extremely strong romantic film that presents not just a couple you find yourself really rooting for to be together, but also a hugely refreshing attitude to the central gay relationship that feels truly subversive.