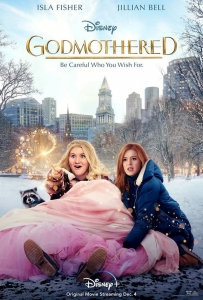 BASICALLY…: An unskilled fairy godmother (Bell) sets out to introduce magic to the life of a grown woman (Fisher) whose childhood wish went unheard…

In the span of less than a week, I’ve watched and reviewed two live-action Disney+ comedies about magical beings entering the real world to save the day, both taking place around Christmas. I would say Godmothered is the better movie than Noelle, but honestly the two of them just kind of blend together all too well that it’s hard to say what exactly separates this one from the other.

In some cases, Godmothered is the slightly more ambitious of the two, given how it takes a Disney tradition such as the fairy godmother trope and puts its whimsical charm against the less rosy backdrops of reality, similar to when the studio sent up their own princess formula with Enchanted. However, there’s really few things I can really say about this film, good or bad, because it exists… and that’s about it.

Thanks to some rather cloying narration by June Squibb, we learn of a place called Motherland, where fairy godmothers are trained in the ways of magic in order to provide people with their own happily-ever-afters, which according to the strict formula they adhere to must revolve around a prince or some sort of true love. One of the fairies in training is Eleanor (Jillian Bell), who is eager to prove her worth as a fairy godmother, but upon realisation that she and her contemporaries are soon to be out of work due to the lack of need for magic in their lives, she decides to set out and find a young girl named Mackenzie, whose wish was stored away for years. Eleanor soon makes it to a news station in Boston, where she finds Mackenzie (Isla Fisher) who is now not only grown up, but appears to lack a serious amount of joy in her life, which is affecting her young children as much as herself. Determined to bring magic back into Mackenzie’s life, Eleanor makes it her mission to bring about a happy ending for the family before Motherland closes its doors for good.

From the visuals, musical score and some of the performances, you can tell that director Sharon Maguire was keen on making this a Mary Poppins-style display of whimsy, but for whatever reason it doesn’t have as much charm as it perhaps thinks it does. Much of the humour doesn’t really land, often relying on obvious jokes and silly puns for its young demographic to giggle over – although there are not one but two direct references to drugs, both of which hilariously come out of nowhere in this family-friendly Disney comedy – while the sense of magic is lost on a flurry of mediocre CGI that’s mainly used to give a raccoon named Gary some extra screen time. They serve a rather generic script that is the latest in a long line of post-modern Disney movies to subvert long-running tropes, only the overall message of love and what constitutes as “happily ever after” is a less provocative and more obvious one that even some of the younger viewers may be able to figure out quickly.

The casting of Jillian Bell as a wide-eyed, eternally chirpy fairy godmother is certainly a far cry from her previous sardonic work in films like 22 Jump Street, Rough Night and Brittany Runs A Marathon, and at least partly because of that I had a difficult time adjusting to her lead character in this. She’s definitely adopting the same approach that Amy Adams did with her turn in Enchanted, although whereas Adams was genuinely sweet and loveable as the 2D animated princess in the real world, Bell’s Eleanor is more irritating than she is endearing. Her chipper voice starts to become cloying after a short while, as does her overwhelming naivety which, even for a fish-out-of-water story such as this, results in her doing some very dumb things that nobody would actually do, regardless if they’re from a fantasy world or not. Isla Fisher fares much better as Eleanor’s project, and she has some funny moments of physical comedy that serve as a reminder of her natural talent for the craft, to a point where you start to wonder if the material would have worked a little better if both Bell and Fisher were simply cast in each other’s roles instead; that way, at least we’d have a lead who we could actually find a little more endearing as well as legitimately funny.

It’s a film that, like Noelle, will probably be warmly received by a younger audience, especially those who still like to immerse themselves in a little bit of Disney fairy tale magic, but for anyone else it’s not especially memorable to sustain a life beyond a mere distraction for your kids while you go and do other things. Again, I would rank this above Noelle because there’s a little more ambition to it, although that really isn’t giving it much praise; either way, these are two Disney Christmas movies that you skip over just to watch some of the more classic ones instead.

Godmothered is a mostly forgettable family movie that doesn’t go many places with its subversion of the classic Disney tradition surrounding the fairy godmother, relying mostly on obvious humour and a cloying central performance by Jillian Bell to claim that it has more charm than it actually does, although it’s a harmless enough film to put on for young children still eager to attain some of that Disney fairy tale magic.

Godmothered is now available on Disney+.