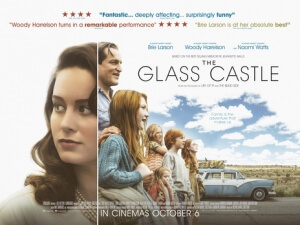 BASICALLY…: Jeanette Walls (Larson) reflects on her childhood with her eccentric and penniless family, headed by their loving but alcoholic father (Harrelson)…

On the one hand, it’s great to see writer-director Destin Daniel Cretton make another movie after the rousing indie success that was Short Term 12, and what’s more getting to do it with that film’s lead Brie Larson, who has since become an Oscar-winning actress and future Marvel superhero after getting cast as Captain Marvel.

On the other hand, the movie he made is The Glass Castle, a manipulative and disingenuous film that mistakes dangerous parenting for being charming and quirky, horrible family values for eccentricity and a sneaky middle finger to the establishment, and a dramatically unengaging story for something that’s far more sickly sweet than it ever needed to be.

Larson plays Jeanette Walls, whose memoir of the same name forms the basis for this film, and who we meet in the 1980s as she’s living a sophisticated life as a journalist and with her fiancé (Max Greenfield). The bulk of the film, however, is told in flashback when Jeanette was a young girl (Chandler Head and later Ella Anderson, both remarkable) and living a not-so-glamorous life with her siblings, her artist mother Rose Mary (Naomi Watts), and most notably her father Rex (Woody Harrelson) who constantly has grand visions for his family, but his alcoholism and hostile tendencies always seem to get in the way. Through Jeanette’s eyes, we see how Rex constantly inspires his kids to live their lives outside the established order, yet he constantly makes things worse as the years go by, leading to an estranged relationship in the film’s present day with Jeanette as an adult.

I have no doubt that in real life, Jeanette Walls’ parents were or are fine people, even with their flaws, but the way this movie portrays them makes them seem like the most unlikeable, uncomfortably aggressive family members I’ve seen on screen since It’s Only The End Of The World (although nobody ever reaches those depths of depravity in this film). They’re both just the most selfish, pretentious and annoyingly whimsical parental figures you could imagine, utterly absorbed in their own ideals more than the safety and well-being of their own children, and disguising their clear self-hatred with passive aggressive behaviour, to a point where they just come across as huge pricks even in scenes where the script doesn’t require them to be; it’s little wonder why the film version of Jeanette wanted to leave so badly and start a life of her own, I’d want to get away as far as I could from them the first chance I got.

But the film has an even bigger problem, and it’s that it treats anyone who rightfully disagrees with the fictionalised Rex and Rose Mary’s beliefs as either the villain or just plain wrong, and that includes Jeanette herself. In the film, she lives a comfortable and safe life in New York City, and even though a part of her story arc is her realising that she’s not completely happy in this lifestyle or with her fiancé, that still doesn’t mean that her parents – who by this point are squatting in an abandoned building in the city, and who we first see scrounging around in a dumpster – have any right to tell her that her life is any worse than what they’re currently living. Sure, she’s certainly unhappy, but at the end of the day at least she’s not living in a crappy makeshift home like they are, starving and barely surviving on what little money they have, so when they tell her – not advise, TELL her – that her life sucks worse than theirs, you find yourself siding so hard with Jeanette because she is clearly in the right in this situation, and they are just awful people for not recognising that their own daughter has different aspirations than they do, no matter what the film forces us to think.

Though the performances are all around strong, particularly Harrelson who’s a little too convincing as the drunk and deadbeat dad that is Rex in this film, they’re just not enough to disguise this script’s frustrating mishandling of the true story this is all based on. It takes what could be something that’s genuinely meaningful and turns into something treacly and manipulative, which is the last thing anyone could ever expect from the writer-director of Short Term 12, a film that also dealt with heavy topics but in a much more sincere and grown-up fashion, unlike the cynical garbage that is his disappointingly inferior sophomore project.

The Glass Castle is a manipulative and treacly film that frustratingly mishandles the real-life story being told here, with unlikeable characters and a forced attempt to make them seem angelic when they’re really not.