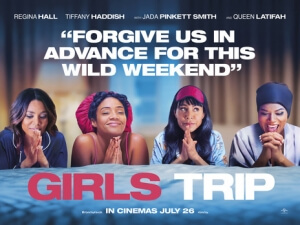 BASICALLY…: Four lifelong friends (Hall, Latifah, Smith, Haddish) travel to New Orleans for a festival that sees them rekindle their strong bond for one another…

When you really break it down, Girls Trip is a movie that should not work. It’s a raunchy adult comedy where a group of old friends get together for a no-holes-barred holiday to a fancy location where all types of shenanigans happen, mixed in with occasional gross-out humour and some life lessons about friendship and all that bollocks. It’s a movie you’ve seen many times over, and at least one other time during this rather lousy summer for comedies thus far, so forgive me for being so burnt out by the likes of Rough Night, The House, Baywatch and others I’m forgetting to mention to not get my hopes up too much for this one.

However, when the execution of an old set-up is good enough, it can make all the difference, and while I can’t say that Girls Trip is a movie I would happily go back and revisit, the fact that it works at all for at least one solid viewing is down to how well it is brought to life by its performers, writers, the director et al.

The set-up may be familiar, but context is everything; the film is about four old college friends who have since moved on to their own career paths, including self-help celebrity Ryan (Regina Hall), gossip blogger Sasha (Queen Latifah), single mother Lisa (Jada Pinkett Smith) and party animal Dina (Tiffany Haddish), who all reunite for a trip to New Orleans where Ryan is scheduled to deliver a keynote speech at a local convention. Their personal lives come into play, however, when Sasha receives a photo of Ryan’s athlete husband Stewart (Mike Colter) cheating on her with another woman, and the group’s efforts to have themselves a good time despite this bad news ends up going in all sorts of different directions, at times threatening their very connection as a unit.

To get some of the negatives out of the way first, this is a movie that doesn’t seem to hide the fact that it’s an old formula, and ends up being very predictable throughout most of it; when a plot point or character is introduced, they end up being exactly the kind of plot point or character that you’d expect them to be, nothing more and nothing less. For a film that was already working off an tried and tested comedic template, it’s surprising how little actual surprises there are to be had here, and it doesn’t hold back in how much it is presenting itself as being just another one of these movies that just so happens to be executed a little better than others like it. Also, it’s pretty clear that the filmmakers really want Tiffany Haddish’s character to be the breakout of the movie, but while Haddish is certainly having a lot of fun playing this part, the character itself I can see being very divisive with some people finding her outrageous and hilarious, and others finding her obnoxious and just plain annoying. I fall somewhere in between, as there were parts where I found her to be a comedic delight, and there were others where I just wanted her to be off-screen as soon as possible. Either way, expect this to be a very divisive part of an otherwise okay movie.

Where the film really shines is in the comradery that the four lead women share with each other, as they all share great chemistry and bounce off of one another remarkably well, and they sell it well enough for you to actually buy that these are really old friends getting back together. Despite appearing in some schlocky movies over the years, Regina Hall is someone I find to be a very underrated comedic actress and I don’t feel has really been given the chance to really shine in a movie until now, as there are some emotional scenes she shares with either her on-screen girl friends or Mike Colter who’s just this utter sleazebag of a husband (but a charismatic one; he is Luke Cage, after all) that she is really good in. But collectively, they’re all highly watchable and generate a lot of the laughs that there are to be found here, and they’ll make it worth at least the one viewing.

Would I go back and watch Girls Trip again, or even consider it one of the better comedies this year? No to both of those, but even just for a one-off I’m glad that I was able to have a little bit of fun with this flawed but ultimately tolerable movie.

Girls Trip has its weaknesses, from a predictable plot to certain characters that threaten to ruin the momentum, and also some strengths, from some legitimate laughs along the way to a genuine sense of comradery between the four leads, neither of which particularly encourage multiple viewings but as a one-off, it works well enough to be a completely serviceable bit of fun.