The Girl on the Train (Review)

The Girl on the Train (Review) 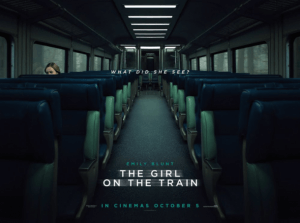 BASICALLY…: Rachel (Blunt), an alcoholic, witnesses a disturbing act from her train, and becomes embroiled in a following murder investigation…

Paula Hawkins’ bestseller The Girl on the Train captivated readers all around the world with its dark exploration of scorned women and their self-destructive tendencies, not to mention a central mystery that was provocative as well as terrifying in its conclusion.

Does its bite have as much effect on the big screen? In some parts, it certainly does; in others, it’s a bit more muddled and not as delicately handled.

Much like the book, the film includes three different perspectives from three women who are all different, but have a viable connection with each other. The main one is that of Rachel (Emily Blunt), a severe alcoholic who spends her days looking out of the train on her way to the city (changed from London in the book to New York here), and harassing her ex-husband Tom (Justin Theroux) who left her for another woman. That woman, Anna (Rebecca Ferguson), provides the second perspective of the story, as we see from her eyes how much of a sinister threat Rachel can be in her obsessive drunken behaviour, especially now that she has a child to mind with the help of a local nanny. Said nanny is Megan (Haley Bennett), who lives down the road from Tom and Anna with her husband Scott (Luke Evans), and confides in her therapist Dr. Abdic (Édgar Ramírez) about her several dalliances with other men in an attempt to feel more free-spirited and secure.

All three women end up being tied for life after an incident that Rachel witnesses from the train, involving Megan and a man that is most definitely not her husband. After a massive drinking bender, sparked from her sadness of the illegitimacy of the perfect couple she had imagined from looking into their house every day from the tracks, she wakes up to find that Megan has gone missing. Determined to piece together the puzzle, Rachel becomes involved in her own investigation of the disappearance, only to find some uncomfortable truths which she may or may not have a larger than expected role in.

The plot is definitely very twisty, but not too complicated to understand (though apologies if my attempt to explain the plot has led you astray!); as things become clearer, you find yourself looking back on things you hadn’t previously let sink in, leading right up to your “a-ha” moment. The strength of writer Erin Cressida Wilson is that she lets you experience a day in the life of this character that Hawkins originally conjured up, and in doing so she shows us not only how unreliable a character like her can be, but also how potentially dangerous. Her frequent calls to Tom’s phone while intoxicated are like something out of a psychological horror, something that further makes clear how much Wilson is trying to further perpetuate the untrustworthiness of how she was written in the book. To some extent, it works; not only are things made even more uncertain as we are show several scenes of her unruly behaviour when inebriated, but Blunt delivers such a compelling performance as a sad and pathetic individual whose actions are mostly defined by what she would rather have happen, even if it means interfering with an official police investigation.

However, director Tate Taylor perhaps plays things a little too safe for the film’s own good, which can lead to the central mystery being drowned out by some moments and characters that are perhaps a little too on-the-nose. While his abilities to get good strong performances out of a largely female cast remain unaltered – something borrowed from his previous experience of directing The Help, as is co-star Allison Janney who appears in the film as a police detective – he doesn’t quite grasp the weight of the material as firmly as he probably should. For instance, and I say this without giving away any spoilers, it’s very clear right from the moment we first see a particular character that they’re ultimately the guilty party, because not only does this person immediately look suspicious and off-putting (perhaps a slight miscasting is to blame), but Taylor directs it in a way that makes it so bleedin’ obvious that you’re miles ahead of the main characters, even if you haven’t read the book prior to seeing the film. Part of what made the mystery in the book so compelling was that you genuinely had no idea who could be the culprit, because it was written in a way that deliberately misled the reader without any hints of other activity whatsoever. Here, the mystery is so spelled out for you and telegraphed early on, you could bring in Scooby-Doo and the gang to solve the case in mere minutes, and it’s a pretty large detriment to a novel that’s really captured the imaginations of so many people that a film adaptation would lack the subtlety and genuine intrigue that had come before it.

None of that makes The Girl on the Train a thoroughly bad one; a little misguided, sure, but not bad. The basic crux of the story is still gripping enough to make you glad you saw it at least once, and the performances are mostly excellent across the board, especially Blunt who at this point can probably do no wrong with her acting choices; but if you’re after something that’s as thoroughly complex and shocking as the book that it was based on, then you’d probably come out of this one feeling a little bit cheated.

The Girl on the Train is a somewhat misguided adaptation of the bestseller, because although the acting – particularly by Emily Blunt – and writing is on point, the direction by Tate Taylor takes away the intrigue and subtlety of the original mystery by making things a little too obvious for us to figure out, even for those who hadn’t read the book.