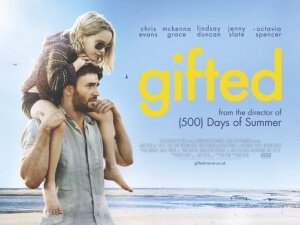 BASICALLY…: Mary (Grace) is a highly intelligent seven-year-old, whose uncle and guardian Frank (Evans) is currently fighting his mother (Duncan) over custody of her…

Gifted is a rather odd film, one that by most accounts is handsomely made, well-acted, and is entirely well-meaning, but for some reason just doesn’t entirely work for me. You can call me a heartless bastard for not being emotionally won over by what has so far been heavily regarded as a crowd-pleasing drama, but I just wasn’t; there were quite a few things about this film that bugged me, more than there were things that I genuinely liked about it.

It’s about a seven-year-old girl named Mary (Mckenna Grace) who lives with her uncle Frank (Chris Evans) in a small Florida neighbourhood. She is a mathematics prodigy, calculating complicated sums in her head on her first day of public school, which is a trait she has inherited from her mother Diane, who committed suicide when Mary was six months old. Despite her obvious genius, however, Frank refuses to consider enrolling her in a much more academically inclined school since he, acting upon his late sister’s wishes, wants Mary to have a normal childhood, something that nearly everyone around him including his neighbour Roberta (Octavia Spencer) and Mary’s teacher Bonnie (Jenny Slate) thinks isn’t necessarily the right move. Nobody disagrees with him more than his mother Evelyn (Lindsay Duncan), who takes Frank to court for a custody battle over Mary, which leads to some heartbreaking and emotionally draining revelations that may or may not lead to a happy ending (though considering this is a crowd-pleaser, you can make your own conclusions about that).

Okay, so from the outset it seems like it’s a fairly standard light-hearted movie about a child genius and the adults’ varying reactions around her, and that’s pretty much what it is… except for the fact that for a lot of it, I was siding far more with Lindsay Duncan’s character than with Chris Evans, and she’s meant to be the main antagonist. Sure, she certainly comes across as cold-hearted and stereotypically snobby in parts, but at the end of the day she wants young Mary to be in an environment where she can truly flex her brilliant mathematical mind, which is honestly better than the path that Evans’ character has laid out for her, where she’s placed in a normal school with kids her age who are nowhere near as bright as she is, and is given simple sums to complete that later prove to be far beneath her intellect. I genuinely thought that Duncan’s character was in the right in this situation, yet the film goes out of its way constantly to portray her as this one-dimensional ice queen with psychologically damaging tendencies towards her own children, and makes Evans’ character – who’s not a very charming person, doesn’t have very good chemistry with his own daughter sometimes, and doesn’t even have health insurance to cover the young girl he’s looking after – the one who’s the point of reason, only because he’s the co-lead. I’m sorry, but this child with the IQ of Einstein absolutely belongs in a far more advanced educational establishment, and I was disturbed that the script was so inclined to make Frank seem like the rogue hero when he’s clearly in the wrong, making it frustrating when the film was trying to emotionally manipulate me into taking Frank’s side because no matter how villainous they were making Evelyn seem, she’s the real hero of this story; sure, she did things that weren’t necessarily good, but she had a better idea of this child’s future than he did. In that sense, I felt the script to not have its heart in entirely the right place, no matter how hard it tried to convince me otherwise.

That was my main gripe about the film, and also the fact that the film tends to side-line Mary herself for a large chunk of the film, making her feel more like a supporting character in a film where she’s the most important one out of them all. The film mostly uses her for scenes of humour, like she’s a character in a Full House-esque sitcom and spouts one-liners as though there’s a studio audience waiting to laugh at them, and when it comes to the big dramatic moments of the film she barely gets a say in any of this, despite them establishing that she has the intelligence and intellect as any of the adults surrounding her combined. We hardly get a scene where she is given a chance to say what she feels about her situation, and for a film about a child genius she is oddly ignored in favour of the much less interesting adults. Mckenna Grace’s performance is wonderful here, and the scenes in which she does get to shine she more than steals, even from the likes of other actors like Chris Evans who despite being a very good actor is unfortunately saddled with a character that he struggles so hard to make compelling but just can’t simply because of the lacking material.

Sitting through this film was once again odd, because most of the time I was siding with the villain of this film, and that the film neglects to consider the emotions and thoughts of its own central child prodigy in favour of adults that aren’t nearly as interesting. However, I couldn’t fault the way in which this film was made, as director Marc Webb – who returns to indie fare after the studio-backed (and now defunct) Amazing Spider-Man reboot series – puts as much charm and light-heartedness into the execution as much as possible, the cinematography is nice, and like I said the performances aren’t necessarily bad in this. However, they all fall victim to a script that doesn’t utilise these tools as well as it thinks it does, resulting in a very messy and disappointingly one-sided film that isn’t nearly as smart as young Mary.

Gifted is an odd sit, since a lot of the time you’ll find yourself agreeing more with Lindsay Duncan’s villainous character than you do Chris Evans’ protagonist, and for a film about a child genius the film rarely takes the time to consider or even pay attention to the thoughts and emotions of its pint-sized central figure, resulting in this being a rather messy script that director Marc Webb and his actors try their hardest to make work, but just doesn’t quite succeed in distracting us from its glaring problems.