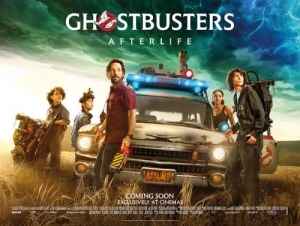 BASICALLY…: A single mother (Coon) and her two kids (Grace and Wolfhard) discover an unexpected connection to the legendary Ghostbusters…

After the fiercely negative reaction to Paul Feig’s 2016 reboot of Ghostbusters, all eyes are now on Jason Reitman – the son of Ivan Reitman, the director of the first two films in the franchise – to put the spirit back into a long-dormant supernatural franchise.

The good news is that Ghostbusters: Afterlife, for the most part, does work. There are plenty of elements that do make it an enjoyable film if you’re either a fan of the other movies or just a casual viewer, and as a franchise re-starter it’s more effective than the previous attempt. However, there are flaws which you could point out as being systematic of a much bigger problem in the current paradigm of blockbuster filmmaking – but very mildly so, because this does at least do most of those flaws right enough.

For the first time in the Ghostbusters series, we’re venturing outside of New York and heading towards a sleepy Oklahoma town called Summerville, where single mother Callie (Carrie Coon) and her two kids Trevor (Finn Wolfhard) and Phoebe (Mckenna Grace) are relocating after being evicted from their apartment. They’ve been left a rundown farm house by their grandfather who has recently passed away, where scientific Phoebe soon not only discovers a significant connection to the legacy of the now-forgotten Ghostbusters, but evidence that points to freakish supernatural activity that could explain the town’s frequent earthquakes, and could spell certain doom for everyone. Soon, Phoebe, Trevor, and their new friends Podcast (Logan Kim) and Lucky (Celeste O’Connor), with some help from local school teacher Greg (Paul Rudd), take up the Ghostbusters mantle to save the day.

Tonally, Ghostbusters: Afterlife is much closer to the original 1984 movie, which did act and feel like a legitimately dark and threatening horror at times, but with characters you’d find in a comedy like National Lampoon’s Animal House. It’s a tone that Jason Reitman is extremely eager to replicate, adding a Spielbergian touch to parts of the pacing, cinematography and even some of the effects, which incorporate both standard CGI and some practical model work. Nonetheless, he does a fine job of keeping most things rather sinister, or at least as much as you can in a movie designed for families, replicating the feeling of watching an intense 80s family movie like Return to Oz or The Dark Crystal or, more appropriately, the original Ghostbusters.

Unlike some of the more cynical franchise reboots out there, there is clearly a good amount of heart and soul that Jason Reitman has put into the filmmaking and the script (which he co-wrote with Gil Kenan, the director of similarly dark family movie Monster House), and it shows with how some of the characters are written, their chemistry with each other, and the touching tributes to some beloved franchise figures. The core cast of players are easy to like, from Mckenna Grace who does good work with her character’s awkward personality, to Paul Rudd who’s charming as always and eager to stand aside and let his young co-stars bask in the spotlight, all displaying solid chemistry with one another and carrying the plot just well enough. Not every new character lands about as well, particularly Podcast and Lucky who contribute little other than to provide light comic relief and to be someone for Finn Wolfhard to fawn over, but the ones that count are decent enough for you to enjoy watching for just over two hours of screentime. Reitman also finds a generous amount of time to pay loving and genuinely sweet tribute to the late Harold Ramis, who despite his passing does play a significant role in the development of the story and some of its characters (his connection isn’t too hard of a mystery to figure out, given that one of our leads bears a striking resemblance to his character from the original movies).

Speaking of the original Ghostbusters movies, prepare for a buttload of references and maybe, just maybe, the odd cameo from legacy faces. Although there are certainly parts where these kind of moments can and do work, the frequent fan service does lead to the biggest problem with this movie, and that is its constant call-backs to the original that rely heavily on viewers’ nostalgia for the original instead of its own narrative strengths. From classic lines of dialogue which are repurposed (sometimes forcibly so), to frequent music cues from Elmer Bernstein’s original score, to a climax which is essentially the one from the first film again, the references hit hard and fast, and distract from the story that is trying to be told here. It’s a nostalgia-heavy trait that you do see a lot of in modern-day franchise revitalisations from The Force Awakens to as recently as Halloween Kills, where studios and filmmakers tend to rely so much on people’s memories of what came before that the need to do newer and more interesting things with the material becomes less and less relevant. Again, there are times when this can work – The Force Awakens is one, and to a point so is Ghostbusters: Afterlife – but regardless there is a real worry about things becoming rebooted so much without much of its own, newer personality left that the marketplace could soon become nothing more than an empty, potentially soulless, place to generate money-making blockbusters.

On a lighter note, Ghostbusters: Afterlife is at least an entertaining enough movie to keep its head above the slime. Fans and audiences will probably be split on how well it honours the Ghostbusters legacy (though not as much as the 2016 attempt), but as a decent family adventure the film does well to make bustin’ feel good once more.

Ghostbusters: Afterlife is a decent and occasionally sweet franchise revitalisation that pays loving tribute to the franchise and introduces a new set of likeable characters via Jason Reitman’s spirited direction, but a heavy dose of fan service more than often threatens to ruin the broth.

Ghostbusters: Afterlife is now showing in cinemas nationwide – click here to find a screening near you!