Ghost in the Shell (Review)

Ghost in the Shell (Review) 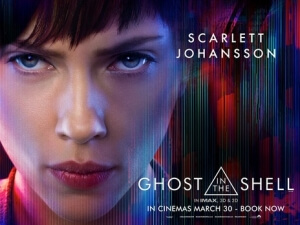 BASICALLY…: In futuristic Japan, a cyborg counter-cyberterrorism field commander (Johansson) faces enemies that could hold the key to her mysterious past…

I have to admit, I’m not the biggest fan of anime in the world. Of course there are exceptions, like Studio Ghibli productions and the occasional breakthrough like Your Name, but for the most part I never find myself getting sucked that much into the story or the characters, which hinders my enjoyment of it quite a bit. Maybe it’s just cultural differences, but I always found certain anime shows and films to be quite frustrating to get through, despite the efforts of my more anime-obsessed friends.

One of the more frustrating to get through, for me anyway, was 1995’s Ghost in the Shell, which was based on the popular manga series; while I found it to be visually stunning on account of the wonderful animation, it was also an extremely complicated film to understand, with a plot and characters that I could not for the life of me get that invested in, and afterwards I had to look up the plot synopsis on its Wikipedia page to know what the hell it was all even about. So, despite respecting it quite a bit for the influence it had on anime features after its debut, it still really wasn’t my thing.

In many regards, this new live-action version is a perfect remake of that anime film; visually breath-taking, but ultimately lacking in any other substance that makes it wholly worthwhile.

This new version of Ghost in the Shell, as before, focuses on Major (Scarlett Johansson), who is comprised of a human brain that has been successfully transplanted inside a robotic body, seemingly after the human was involved in a terrorist incident. She soon becomes part of a counter-cyberterrorism unit in a futuristic Tokyo, where she and fellow agents like fan-favourite Batou (Pilou Asbæk) are on the hunt for a mysterious figure known as Kuze (Michael Pitt), who as it may turn out might be connected in some way to Major’s past life before her physical transformation.

First and foremost, this film looks incredible. Director Rupert Sanders, whose previous film was 2012’s equally-stunning Snow White and the Huntsman, is very much a visual filmmaker, and here along with cinematographer Jess Hall he has created a visceral landscape of futuristic Tokyo that is definitely of a similar aesthetic to something like Blade Runner but is still very much its own thing. The city skyscrapers are coated in giant holographic images of people, text, and shameless advertising that feel true to the overly-commercialised nature of Tokyo today, and on the streets there are colourful sights waiting around every corner, from the slum-like block of apartments to the fancier, slicker corporate buildings. Even when the film tends to become a bit more surreal in its imagery, it’s still a feast for the eyes, which helps give the film a slick sense of visual identity all the way through, one that definitely wears its anime influences on its sleeve.

That being said, there’s no denying that this is the textbook definition of “style over substance”. This Americanised version of Ghost in the Shell incorporates a very by-the-numbers corporate espionage plot, the kind where the beliefs and values of its central character are tested more and more as they get further into the mystery, and when it comes to its characters and especially its story the script doesn’t really add anything to fully engage you, other than its visuals. You can see every little plot twist coming a mile off, making it a somewhat predictable sit; the villains are exactly who you’d expect them to be, certain characters have exactly the kind of connection you would probably expect, it ends with a big climactic shoot-out as these kind of films tend to do. The thing is, none of it is really that gripping because it doesn’t take enough time to properly develop these characters and make them interesting, outside of its two central leads Johansson and Asbæk who, despite doing fine with what they’re given, feel like they’re expanded upon only because they were popular in the original manga and anime. For this standalone live-action version, one that is supposedly meant to kick-start its own franchise, it’s a fairly hollow one to start out on.

I would very much like to know what a hardcore anime fan would make of this film, especially those who consider Ghost in the Shell to be one of the greats. There are a few scenes in this film that borrow directly from the 1995 anime, but from what I hear the plot of this has almost nothing to do with the actual source material, and that it was mostly invented just for this film. I have no idea whether that would enrage or delight fans of the original, which is why I am fascinated to hear what they actually think about this film when they see it. The same with the controversial casting of Johansson in what is apparently meant to be reserved for an Asian actress, which is Hollywood logic I kind of understand, seeing as someone like Scarlett Johansson is more of a box office draw than anyone else of Asian origin realistically is in Western cinema, but even still has understandably gotten the accusations of whitewashing rocketing sky-high, and having seen the film I am curious as to where those outcries will go next.

But until then, much like the 1995 film for me, Ghost in the Shell can be summed up with an emphatic “eh”.

Ghost in the Shell is a visually stunning but ultimately hollow adaptation of the popular manga and anime series, which boasts some incredible cinematography and a visceral style, but it relies on an unoriginal plot and undercooked characters to really leave an impact.