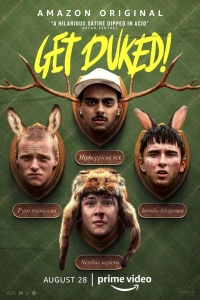 BASICALLY…: A group of young delinquents find themselves being hunted whilst on a Duke of Edinburgh Award scheme in the Scottish Highlands…

Originally due for release earlier this month under the name Boyz in the Wood, debut director Ninian Doff’s SXSW crowd-pleaser suddenly got pushed back to the end of the month at the last minute, now under the more appropriate title Get Duked! (appropriate, seeing how that phrase actually gets mentioned quite a few times in the film, whereas nobody at any point says the other title). Despite the eleventh-hour delay – it was even to a point where I had published a preview for it during the week it was originally coming out, before learning of its later release – it was worth the wait, because this is a hugely entertaining, often very funny comedy that combines a likeable coming-of-age tale with The Most Dangerous Game, complete with a timely message about class divide and disenfranchised youths.

Our heroes are a group of teenage boys – disillusioned Dean (Rian Gordon), dim-witted Duncan (Lewis Gribben), and wannabe hip-hop star DJ Beatroot (Viraj Juneja) – who, after a series of misdemeanours, are forced to partake in the Duke of Edinburgh Award scheme, along with sheltered and enthusiastic Ian (Samuel Bottomley) who, unlike the others, is actually keen to gain his qualification. The four are sent across the Scottish Highlands on a trek designed to teach them skills in teamwork and survival, but that soon becomes lethal when they start to become hunted by a masked Duke (Eddie Izzard), who’s hell-bent on ensuring the lower-class teens are wiped from the equation. The four, naturally, team up to make it out of their cat-and-mouse situation alive, on a journey that involves makeshift bombs, bread thieves, hard-partying farmers, clueless cops, and drugs made out of rabbit droppings.

If it sounds daft, don’t worry; the film has a huge sense of humour that negates any fears of it turning into a self-serious British version of The Purge. It is frightfully funny from the get-go, with little character quirks and Edgar Wright-style sight gags landing almost every time, often causing hysterics with some of its unexpected and hilariously brutal moments of violence that had me chuckling for a good few minutes at least. Very much positioning itself as a dark comedy, the film also incorporates some fun commentary on the sharp divide between the elderly elite and the working-class youth, who they see as a threat to everything they spent their whole lives working towards, despite the fact that they are the ones literally causing the problems the teens are currently facing. The message is perhaps made all too obvious at times, especially during the film’s climax when everything stops dead to zoom in on a character making a politicised speech on the subject that they might as well be delivering towards the camera, but it’s delivered in a very earnest and fun manner that allows you to digest without losing sight of its main reason for existing, which is to deliver as fun a viewing experience as it can.

Fun, it most certainly is, due in part to the film’s wicked sense of humour, and also because you genuinely do like these four main characters we’re spending the entire film alongside with. The four young actors share a strong chemistry with each other, and they each give their characters a recognisable personality that’s both enjoyable and surprisingly heartfelt; Viraj Juneja is the scene-stealer of the lot, draped in self-confidence and spitting out lyrics to hide a more privileged background, followed closely by Lewis Gribben whose Duncan provides some of the film’s biggest laughs with one dunderheaded remark after another. Think of this leading quartet as The Inbetweeners if they somehow stumbled into the middle of The Hunger Games, and suddenly the movie seems all the more hilarious; but the performances and the characters have a good deal of heart to them which makes you really want to root for them to escape the clutches of evil rubber-masked Eddie Izzard and his twisted hunting ritual. Elsewhere in the cast, you have a fun sub-plot about a pair of police officers following the young boys’ trail (wherein superintendent Alice Lowe delivers a funny monologue about the area’s lack of bread), and a sight nobody would ever have thought they’d see: esteemed character actor James Cosmo playing a farmer scoffing rabbit poo whilst playing hip-hop on a stereo.

The cast, both known and unknown, works well underneath director Doff’s watch, as the first-time filmmaker nails the tone and sets a healthy pace (it comes in at just under 90 minutes) for them and the viewing audience to have as much fun as they possibly can, and more often than not the film remains consistently entertaining from the opening credits all the way to the final shot. Even when it feels like the film is starting to lag, Doff immediately spices up the scene with a glorious bit of sudden carnage, ensuring that our attention is firmly within his grasp, and that right up until the end it leaves us guessing about what’s going to happen next. Doff has made a fun, funny and furiously engaging black comedy that’s an impressive calling card for any studio looking for the next quirky British visionary; should he go on to do more genre fare, or do something wildly unpredictable, then he’s well on his way to the big leagues if Get Duked! is any indication.

This is a British comedy with laughs, heart and solid entertainment to spare – and that’s before the movie even introduces the rabbit poo.

Get Duked! is a hugely entertaining and often hilarious dark comedy which scores big laughs from a well-paced script and direction by first-time filmmaker Ninian Doff, as well as a likeable quartet of lead performances and some memorable turns by its starry supporting cast, complete with a fun commentary on class divide that never drags, especially when there’s sudden violence and drug-laden rabbit poo involved.

Want to decide what the movie’s like for yourself?
Check out Get Duked! streaming links
via